From the Archives - Jonathan Stewart 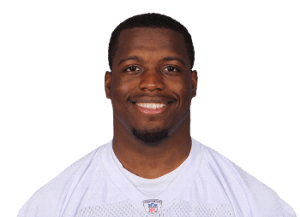 Jonathan Stewart is in his fifth season in the NFL, all with the Carolina Panthers. In his career, Stewart has 27 touchdowns, 3,809 rushing yards and 96 receptions for 850 yards. Stewart was featured in the Summer 2009 issue of Sports Spectrum, here is his story…

Jonathan Stewart did not start a game last year in his rookie season for the Carolina Panthers, yet he made a profound impact on a team that used a strong rushing attack to forge a 12-4 record.

Stewart rushed for 836 yards and 10 touchdowns, both Panthers’ rookie records. He teamed with veteran DeAngelo Williams to lead all NFL running back duos with 2,351 yards, most since 1984 by a running back combination on the same team.

The future seems infinitely bright for the 5-foot-10, 235-pound Stewart, who has breakaway speed (better than 4.5 seconds in the 40-yard dash) and the power to break tackles.

Look beneath the surface and you’ll find that Stewart is rooted in a deep faith in Jesus Christ and a close relationship with his single mom who went from suicidal thoughts to salvation in a single evening.

Lora Faison, Stewart’s mom, tells of the time in 1997 when she felt nobody loved her and nobody cared. She was recently divorced and had two young boys to raise, including Jonathan. Amid her despondency, she was touched by God while watching a Christian program on television and her life was forever changed.

“Being a single mom and wanting something better for my kids, it took something almost destructive in my life to almost happen to me that drew me to God,” she says.

“When she got saved, that turned the whole household around,” says Stewart.

Even though Faison worked on Sundays then, she made sure her children went to church. She taught them honesty and humility.

Stewart says he was baptized in the fifth grade because he was afraid to go to hell, and that he rededicated his life to Christ in the ninth grade.

Now, he says, his faith in Jesus is the most important thing in his life.

“It’s my everything,” says Stewart, 22. “We’re placed on this earth to glorify God and that’s about it. It’s simple to say, but hard to do, especially in the position I’m in now.

“With God, without my morals and beliefs, I’m nothing; I’m just a soul-less individual pretty much. But because of Him this is where I am and this is who I am. I can say I live my life with no regrets because of Him. I believe everything that happens, happens for a purpose.”

Stewart’s football career has been a blazing success at every level. He rushed for a state-record 7,775 yards and 95 touchdowns in four seasons at Timberline High School in Lacey, Wash. then became an All-American in college at the University of Oregon.

He was a first-round draft pick of the Panthers and is already a force in the NFL, requiring opposing defensive coordinators to make specific game plans for how to stop him.

Stewart isn’t bashful about his career goals: He wants to be one of the greatest running backs in NFL history.

“I don’t think you should play the game at this level if you don’t have high expectations,” he says.