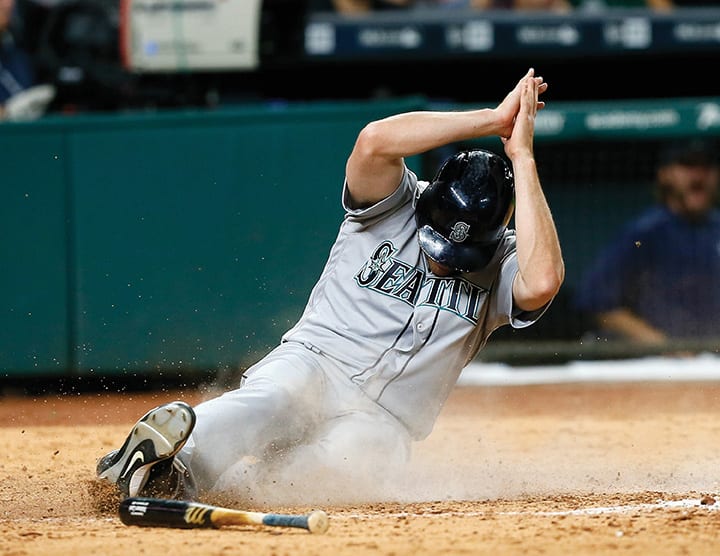 HOUSTON, TX – MAY 05: Seth Smith #7 of the Seattle Mariners sscores in the ninth inning against the Houston Astros on May 05, 2016 in Houston, Texas. (Photo by Bob Levey/Getty Images)

He’s heard the cheers, the roar of approval as the baseball he smacked sailed over the right field fence for another home run.

And Seth Smith has heard the boos, the shouts of disappointment when his infield grounder is scooped up and thrown to first for the final out with the bases loaded.

As the right fielder for the Seattle Mariners, Smith knows all too well the highs and the lows of sports. And as a Christian, he knows the dangers of being only measured by his batting average and his team’s won-loss record.

It can be a peace robber.

“It’s easy to get caught up in wins and losses and batting averages and how you produce and how you feel people view you and value you,” said Smith one sunny afternoon while sitting in the Mariners’ dugout prior to a game. “You just have to remind yourself, hey it’s just a game.”

Not that the outcome isn’t important. It’s just not the final measuring stick.

“On the spiritual level, you’re out there trying to glorify Christ in everything you do,” Smith said.

Performance at work, whether you’re swinging a bat or changing a transmission or painting a house, it doesn’t bring special blessings from God.

“He doesn’t care if you’re 0-for-4, or your batting average is terrible, or if you’re losing,” Smith said. “He’s only worried about how you carry yourself in those moments. Because we’re not promised success, if anything we’re promised suffering.”

So, whether you’re a right fielder for the Seattle Mariners or a bank teller for the local bank, the most important thing is to let your light shine as a Christian – in the good and the bad times. That’s Smith’s goal, to be a Christ-centered influence to others.

“Ultimately, you have to realize that the things of this world are fading away,” Smith said. “Your goal every day is to glorify Christ.”

That perspective, being Christ centered, helps Smith avoid the peaks and valleys of being a professional baseball player.

Actually, the fact that Smith is even in a Seattle Mariner uniform chasing down fly balls, is an amazing story. Oddly enough, Smith’s unlikely journey to being the right fielder for the Mariners began on a football field. After graduating from Hilcrest Christian High School in Jackson, Mississippi, in 2004, Smith went to the University of Mississippi on a football scholarship, not a baseball scholarship.

Even though he was drafted in the later rounds of the baseball draft his senior year in high school, Smith’s dream was to toss touchdown passes, not catch fly balls. Football is still his favorite sport. But at Ole Miss, Smith ended up being the backup to some guy named Eli Manning. Eventually, Manning ended up winning a Super Bowl with the New York Giants, and Smith ended up picking a different career – baseball.

After being picked as a freshman All-American at Ole Miss and being all-league three straight years, Smith was drafted in the second round by the Colorado Rockies in 2007 after his junior year, beginning his 11-year MLB career that’s brought him to Colorado, Oakland, San Diego and now Seattle.

So, Smith has arrived. He’s rich and he’s famous. With his needs met, there’s a chance he’d ignore God. But Smith avoids that perspective because of one thing. He realizes he still has spiritual needs. 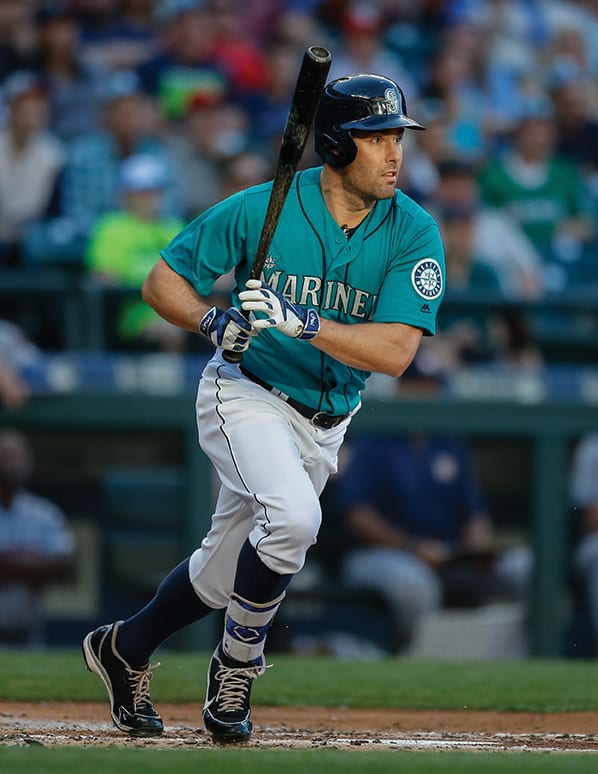 “That’s one of the hardest things for me,” Smith said. “As far as this life goes, everything, at least on the surface, everything is going in the right direction.”

But Smith is careful not to forget an important thing. God is his benefactor.

“Sometimes it just seems like it just happens because you’re off doing the right thing,” Smith said. “We know that’s not the case. He gives us everything and it’s our job to figure out a way how to give it back to him. It is hard.”

Smith and his wife, Lindsay, have ongoing conversations about ways to give back to God’s kingdom.

“It’s a daily battle and it’s a daily thing we talk about and pray about,” said Smith, who has two young children. “It’s something we hope that as we’re faithful in our prayers and our hope is that He’ll be faithful and open up doors and show us where He wants us to be.”

Smith’s daily focus is on God. And Smith has a prayer request that’s continued to be met. His father, Gerry Smith, who is 67 years old, had a lung transplant a year and a half ago.

“We’re walking through that, we’re dealing with that,” Smith said. “I’m just seeing his perseverance through this suffering. His reliance on God has been an encouragement to our family. Just seeing him, his unwavering commitment to Christ and the way he’s dealt with the suffering.”

“There’s a lot of detours you can take,” Smith said. “You can get caught up in some of the things baseball allows. You can easily start going the wrong direction.”

To avoid that, he knows that it’s important to begin his day getting off on the right foot and heading the right direction. That’s the key to a successful Christian life.

“You wake up in the morning you do your best to die to yourself and to live for Christ,” Smith said. “You’ll at least be pointed in the right direction.”

To stay on that right path, to grow as a Christian takes more than sitting in church on Sunday mornings, singing gospel songs and listening to the sermon. It takes a day-to-day commitment. As Jesus promised, “Seek and you’ll find.” There’s an action verb to obedience.

“It’s like a sport,” Smith said. “How much are you going to put into it? He’s faithful.”

But as a Christian, your batting average in life isn’t what’s important. That’s not what redemption is about.

It’s about seeking. It’s about reaching up. Paul makes a similar comparison in the Bible when he says we should run to win.

“We get to talk with our creater. Our God,” Smith said. “We use prayer to petition, to ask, to praise, to glorify.”

Prayer is like Smith’s greatest pep talk from a coach.

“My prayer life I find that as I’m praying for things and praising God how it makes me feel as a believer and then just selfishly as a person,” Smith said with a smile, “is just a feeling that nothing else can give you.”

Even better than a game-winning homer.