When the Minnesota Twins take the field for the American League Wild Card game against the New York Yankees on Tuesday night (8 p.m. EST), it will be the bow to one of the greatest regular season turnarounds in MLB history. After losing 103 games the previous year, the Twins shocked the baseball world and went 85-77, clinching the second Wild Card spot and becoming the first baseball team to make the playoffs after losing 100 games the year before.

One player who best exemplified the historic turnaround was pitcher Kyle Gibson, who was sent down to the minors twice, only to return and throw his best stuff during the heart of the playoff chase.

Gibson, 29, started the year as the Twins’ third starter after a strong spring training, but the momentum didn’t carry over once the games counted. In six starts, the right-hander was 0-4 with a 8.20 ERA, giving up 24 earned runs, walking 13 while only striking out 16 batters. He was sent down to Triple-A Rochester on May 4, after giving up four runs on eight hits and three walks in a 8-5 loss to the Oakland A’s.

“I don’t know that I’ve had a more frustrating stretch that I can even remember,” Gibson said after that game to MLB.com. “I completely understand where they’re coming from. I understand they need to make a change and I have things to work on. It’s a whole lot easier to work on those at Triple-A than here when you’re trying to win games and get big-league hitters out.”

After two starts for the Rochester Red Wings, Gibson made his way back to Minnesota on May 22 and started to see some success. He won four out of his next five starts and had a 3-2 record with a 4.24 ERA in the month of June. But once again, Gibson would be optioned to the minors on July 25, despite throwing 7 1/3 strong innings in a 6-5 victory over the Detroit Tigers three days earlier.

The blessing in disguise was he was able to pitch in front of his family and friends as the Red Wings were in Indianapolis, just a 30-minute drive from his hometown of Greenfield, Ind.

“You don’t want to see your kid fail,” Kyle’s father George Gibson said to the Indy Star. “But if you keep it in perspective, there’s millions of parents who would trade places with us (even) on a bad night.”

Kyle used the demotion as further motivation for the rest of the season.

“There’s a side of this game that no one really likes. You’re either going to feel sorry for yourself or get to work,” Gibson said to the Indy Star. “Sometimes the numbers just don’t work in your favor.” 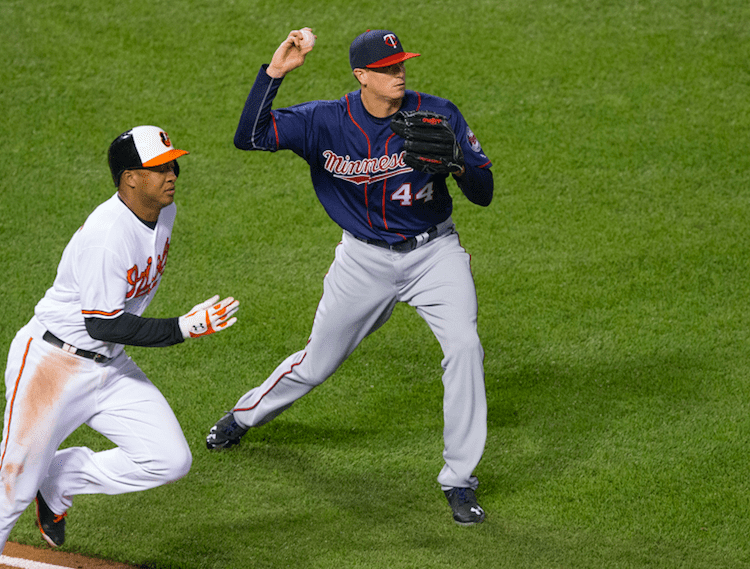 When Gibson’s number was called again, he took full advantage. After losing two of his first three starts, dropping to 6-10 on the year, Gibson caught on fire and would not lose again. Starting on August 22, Gibson would go 6-0 in his eight starts. In 49 1/3 innings pitched, he allowed 16 runs, struck out 46, and walked 10 batters, dropping his overall ERA a full point.

“I think for me the most satisfying thing personally is being able to be someone that the team has confidence in every five days to be able to go out there and give the team a chance to win,” Gibson told Sports Spectrum. “That was the worst part about the beginning of the season while I was struggling. I knew that I was not doing my job and not giving the team a chance to win while I was on the mound.”

The Twins used Gibson’s quality starts to help complete the unlikely playoff run. Starting August at 50-54 and 4.5 games out of the final AL Wild Card spot, they finished the year on a 35-23 sprint capturing their first playoff berth since 2010.

The early season struggles and later successes have a deeper meaning for Gibson than his performance on the hill. It helped breathe life into scriptures that highlight the benefits of tough times producing perseverance and character.

“Recently I have gone through Acts and I am going through Romans now, and to see how Paul and the other early Christ-followers went through struggle after struggle really put certain things into perspective,” Gibson said. “In Romans 5 there is the classic scripture that talks about suffering producing perseverance, and perseverance producing character, and character producing hope. There is one definition of hope that uses ‘trust’ in it. And I think for me, these struggles have really shown me a new way to trust in my stuff and trust in my approach on the mound.”

Gibson will put his hope in his teammates as the Twins will be looking for their first playoff win since 2004. He was left off the roster for the Wild Card round, but is expected to get a shot to pitch in the playoffs if Minnesota beats New York.

Regardless, the memories of a roller coaster season combined with words from Paul in the Bible will benefit Gibson well after he’s thrown the final strike in his career.