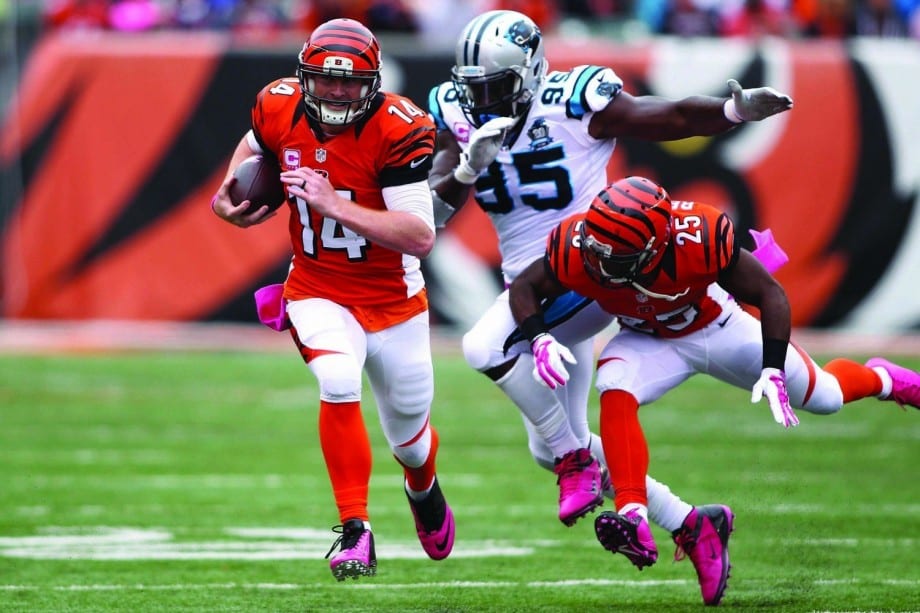 Andy Dalton has been described by teammates as tough, gritty and solid.

But now, as Dalton plays in his fourth season as the Cincinnati Bengals quarterback, he gets to add another description to his name—father.

“We are about to go into the next phase of our life; we have a son on the way,” says Dalton with a smile after a team workout at Paul Brown Stadium on the Ohio River and the Ohio-Kentucky line several months ago before the birth of his son. “We really have to be strong together. It’s not just us anymore; we are bringing our son into the world. I’m very excited about it.”

Dalton, who was selected by the Bengals in the second round of the 2011 NFL Draft (35th overall), says that having a spiritual family will be his main focus. He also stressed that his wife has been one of the reasons he feels he has been successful in the NFL, and why he’s also ready to be a father.

“The biggest thing is having her support,” he says. “She’s all into everything that I have going on, from my job to our foundation. The bond and togetherness we have is everything to me. She is a very strong Christian.”

His devotion to his wife is the reason Dalton chooses to wear a wedding ring while playing football, which is rare among professional athletes. However, this is no typical wedding ring; it’s made out of rubber so it won’t be easily damaged.

Because of the hard-hitting, physical nature of the NFL, a lot of players will not wear wedding rings for fear of injury to their hand and fingers or damage to their ring.

A man who went to Dalton’s alma mater, Texas Christian University, started a company that designs rubber rings for people who are active and for people who do not want to damage their rings. The rubber ring was a perfect fit for Dalton because he still wanted to show everyone he was married, but he did not want to damage the ring his wife gave him.

“I thought it was a great idea,” he says. “I am married, and to wear a ring and not have to worry about it (getting damaged) is nice. I guess there are a lot of people who see it and say ‘Oh, he’s still wearing his ring even though he’s playing.’ I think it’s the right thing to do.” 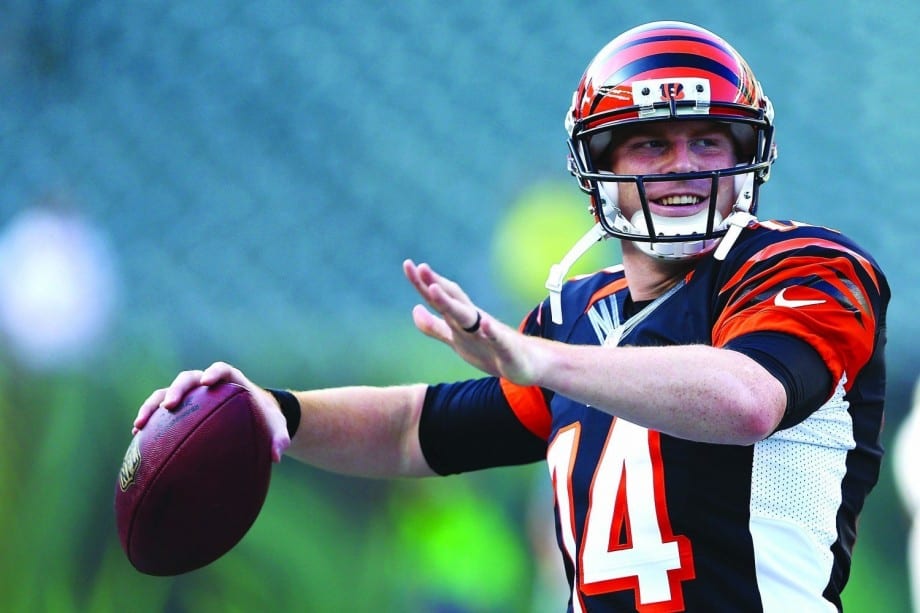 Their bond is so strong that the two have formed the Andy and Jordan Dalton Foundation, which is geared to help Cincinnati-area children who are ill or physically challenged and provide daily support and life-changing experiences.

“We not only want to help the kids involved in the foundation, but we want to help the family as well,” he says. “We want to reach out and provide some things for them that they would not necessarily be able to have, and we want them to know people do care about them.”

Dalton first got the idea of helping children early in his college career when he was a freshman at TCU. He says his quarterback coach’s granddaughter was diagnosed with leukemia, and he just felt the need to begin talking with the girl throughout his college days. “I was just talking to her a little bit here and there and really didn’t feel like I was doing a lot,” he says. “But (my coach) would come back and tell me that I had no idea what a positive impact my talking to her was having on her.”

Today, the girl is cancer-free.

“Just being there and talking to her obviously meant a lot to her,” Dalton says. “That’s why I felt the need to start a foundation here in Cincinnati with these kids who are sick. Some of my wife’s friends from either high school or college are special-needs teachers or they babysit kids with special needs, so we kind of had the connection there. We want to help the families of those kids in need. We can really see the foundation growing.”

The couple also has established the foundation in Fort Worth, Texas.

“To see how much we can impact a lot of people is a blessing,” he says. “It’s not about us at all.”

At the moment, Dalton feels comfortable where he is in his career. He is in his fourth year as the starting quarterback for the Bengals and before the season he signed a six-year, $115-million extension.

He and Peyton Manning are the only NFL quarterbacks to pass for more than 3,000 yards in each of their first three seasons. Last season, Dalton set a Bengals record by passing for more than 300 yards in four consecutive games, and he had his highest quarterback rating of the season with a 135.9 on Oct. 20 and 136.5 on Dec. 22. He became the first Bengals quarterback to throw 11 TDs over a three-game span.

And his overall record of 29-18 as a starter is the best winning percentage of any Cincinnati quarterback with at least 10 starts. Following his rookie year, Dalton played in the Pro Bowl. 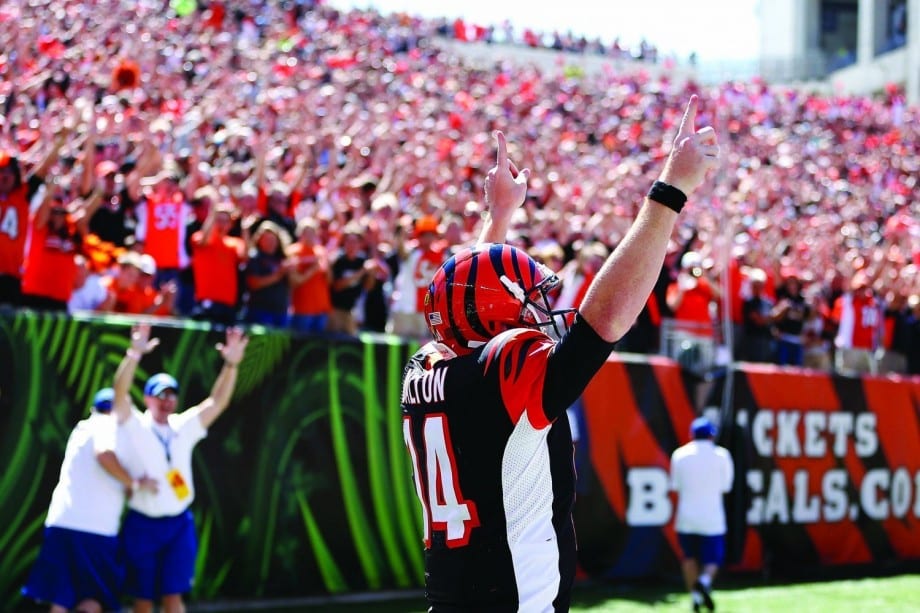 “When you are in college, you face different things,” he says. “You are off on your own—so there are different challenges you face.”

For Dalton, he was surrounded by a lot of “good Christian people” and grew up in a Christian environment. Those attributes gave him a solid foundation for his life and taught him how to face and overcome challenges.

“I grew up going to church and believing in God and was taught all the right things growing up, so that helped me,” he adds.

Soon it was off to the NFL. But prior to that, he found another solid foundation—his wife.

“At the end of college I got married, and my wife is a very strong Christian,” he says. “Going into the NFL, there were a lot of unknown things, and she helped me tremendously.”

He added that the Bengals have several Christians on the team, which also made adjusting to the NFL a lot easier.

“It means a lot to have these guys here—we have a good group here and a lot of good Christian men on this team,” he says. “To have other guys who are surrounding you who are Christians, and who can make an impact on you —whether it’s just a conversation with a teammate or them seeing how you go about your work—whatever it is you can impact a lot of people not only here on this team but outside.  That’s one thing with the NFL and playing sports is that you have a platform to impact a lot of people, and I feel blessed to be in this position.”

Dalton enjoys the platform the NFL offers to tell others about his relationship with God.

“I feel really blessed where I am,” he says. “At 23 years old, I was able to start a foundation to help kids. That’s one area where we are blessed—we can help a lot of people and minister to them too.”

Being a high-profile athlete brings praise and criticism, and Dalton says he has learned to rely on his faith to stay focused.

“At times, it’s tough when you hear different things or you are put in different situations,” he says. “I just know I am playing for a greater purpose. This sport teaches you humility and patience in all different aspects. There are times when you are praised and you are the hottest thing going—and then things turn, and people are trying to bring you down. You just have to know that God is in control of everything, and you are playing for Him. He has given you this talent, and so you have to tune some things out and keep the focus on Him.”

Although his transition from college to the NFL was made easier with his faith in God, Dalton feels that kids today—especially young athletes—need to become involved in Christian activities in order to make their transition into adulthood easier as well.

“They need to just get involved in church or a ministry,” he says. “There are a lot of Christian-centered organizations available, and kids need to get plugged in. If they get involved in something, then who knows where it can lead, and it’s just a good thing to do.”

So for now, Dalton feels like he is where God wants him to be. He is the starting quarterback for a team that has made the playoffs the past three seasons; he and his wife have started a foundation to help kids and families in need, and he became a father this past summer.

“God has really been good to us,” he says. “My wife and I love it here in Cincinnati. I love playing for the Bengals, and hopefully we are here for a long time. Over the next 10 years or so, we are going to be having kids and raising our family, and that will be the next phase in our life.”

Del Duduit is a freelance writer who lives in Lucasville, Ohio. This story was published in Sports Spectrum’s Fall 2014 DigiMag #2 (Vol. 28, No. 4 in print). Log in HERE to view the issue or subscribe HERE to receive 12 issues of Sports Spectrum a year.