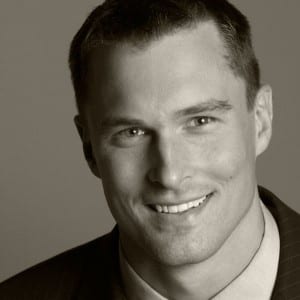 Casey Crawford joins us on UNPACKIN’ it to talk faith, football and business. Casey played tight end at the University of Virginia, then with the Carolina Panthers, and won a Super Bowl with the Tampa Bay Buccaneers. He is currently the CEO and President of Movement Mortgage, and his company was recognized by Inc. Magazine, in both 2012 and 2013, as the fastest-growing privately held mortgage bank in the country. Click HERE to listen to the entire interview.

BRYCE JOHNSON: Looking back at your experience in the NFL, what did you come to realize about sports fans and the media…as far as how people view football and football players?
CASEY CRAWFORD: Playing football in the NFL was one of the greatest experiences of my life. I absolutely loved it! God used it in really significant ways to give me a platform to share the light of Christ out in the community and with fans. My last year was with the Tampa Bay Buccaneers. We were really blessed to play in the Super Bowl that year, which was an unbelievable experience!

The moment that sticks out in my mind is standing on the 50-yard line and getting to hold up the Lombardi trophy with head coach, Jon Gruden—one of the most unbelievable coaches in the NFL and one of the most inspiring guys I’ve ever been around. After the game, we got on the plane to fly back to Tampa to celebrate. Coach stood up and was kind of making a joke (he’s a funny guy), and he held up his hand to the whole plane and held his thumb down and said, “Hey man, I’ve got four more fingers!” Everyone was dying laughing because in less than 24 hours we had just won the Super Bowl and Coach was already talking about winning the next one.

I started thinking about this greatest achievement in sports…the highest honor in the game I played where we were the best team in the world in what we did, and it satisfied for less than 24 hours. You think people dedicate their lives to this stuff and you’re watching fans and people that had gotten so thrilled and so engaged, and it was a fairly light piece of metal, the Lombardi trophy that I’m holding up, and it was just a moment in time and then passed.

It struck me that it’s such a shame that so many people miss the eternal importance of a relationship with Christ and all the lasting joy that comes from that. It doesn’t need to be replenished each day with a new experience because it’s an ongoing relationship that’s eternal rather than just a momentary experience that fades pretty quickly, and has to be duplicated over and over and over.

So that was when I knew I was going to be done playing. I had gotten to see both ends of the spectrum. We set the NFL record for the most consecutive losses when I was with the Panthers, and then the next year won the Super Bowl with the Bucs. I decided to call it quits after that.

BRYCE JOHNSON: That’s an incredible perspective. Maybe go into that more, as far as here you are at the Super Bowl playing with the Bucs and then the off-season hits and you say “All right, that’s it, I’m done.”
CASEY CRAWFORD: It was something my wife, Michelle, and I prayerfully considered. I loved football and loved playing, but it was never something that was defining of who I was, and I’m really thankful that I have a mom and dad who grounded me in a faith and hope in Christ at a young age. That was always much more defining of my person than what I did professionally. So going through the experience of the Super Bowl, my wife and I prayed about it. We loved Charlotte (N.C.) and wanted to settle down and start a family. The NFL can be tough because they bounce you all over the country, and it gets more difficult to settle down. So we felt led to stay in Charlotte, put down some roots, and that’s when I got into real estate and the financial services arena. A couple years later I started our mortgage company in Charlotte. It was a decision some people didn’t understand and asked me how I could leave the NFL…and why I would ever just want to voluntarily retire from the NFL? But for us, it was a faithful decision. I wasn’t a big name or a marquee name, so we didn’t break any hearts when I made that phone call. It was just where God had called us.

BRYCE JOHNSON: Next time we’ll talk about the next chapter of your life. Your mortgage business and what you’ve been doing recently has really taken off. Today we’ll leave with a teaser about God leading you to the mortgage business at the worst time in history.
CASEY CRAWFORD: After asking God why in the world he would have led me to something like this, He’s been faithful and we’ve had a lot of great success. It’s been a fabulous journey and we can visit about that another time.

This column was published in Sports Spectrum’s winter print issue. Log in HERE to view the issue. Subscribe HERE to receive 12 issues of Sports Spectrum a year.