Another Angle: Does God Care Who Wins?

By Stephen Copeland Oct 27, 2015
GREEN BAY, WI - JANUARY 11: Aaron Rodgers #12 of the Green Bay Packers reacts after completing a pass against the Dallas Cowboys during the 2015 NFC Divisional Playoff game at Lambeau Field on January 11, 2015 in Green Bay, Wisconsin. The Packers defeated the Cowboys 26-21. (Photo by Al Bello/Getty Images) 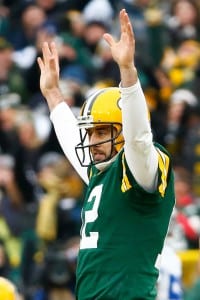 After the Green Bay Packers’ 27-17 victory against the Seattle Seahawks in Week 2 of the NFL, quarterback Aaron Rodgers’ post-game comments made headlines across the country. When asked about the win, Rodgers responded, “And then getting help from God. I think God was a Packer fan tonight, so He was taking care of us.”

Rodgers made the comment with a wry smile, shifty eyes and a disingenuous tone, which led people to believe that perhaps Rodgers was taking a shot at Seattle Seahawks quarterback Russell Wilson. Of course, all this speculation does not come without a history.

If you remember, Wilson threw four interceptions in the NFC Championship game in January, yet still managed to lead the Seahawks to a dramatic victory against the Packers to advance to the Super Bowl. Wilson told the media after the game, “That’s God setting it up, to make it so dramatic, so rewarding, so special.”

When asked about Wilson’s comments on a Wisconsin radio show in the coming days, Rodgers supposedly scoffed and commented, “I don’t think God cares a whole lot about the outcome. He cares about the people involved, but I don’t think He’s a big football fan.”

He stated his stance then, but now, in Week 2 of the 2015-16 season, perhaps Rodgers was sarcastically dishing one final blow to Wilson’s logic and ideology.

Oh, the theological battleground of the NFL!

My intention in writing this column is not to pick sides or weigh in on another celebrity feud (I could care less about stuff like that, whether it’s Rodgers and Russell or Nicki Minaj and Miley Cyrus); nor do I want to add more unnecessary noise in our over-sensitive society that seems to be outraged or offended over anything these days. I want to write about this, quite simply, because I’ve always appreciated the avenue sports presents to talk about issues of faith and culture—real issues that shape how we see the world.

To begin, one thing I admire about Wilson, judging from Twitter and his interviews with the media, is how his faith seems to bleed into everything he does.

Sure, perhaps he becomes more of a polarizing figure whenever he uses phrases like “God told me…” in relation to sexual purity with his girlfriend Ciara or “God planned this…” in relation to a football game, but how he expresses his faith is entirely up to him—that’s not for me to judge. I believe that faith, no matter what it is, is a deeply personal thing, and is generally something that makes people better unless it inflicts harm on others. So I commend Wilson for seeming to see just about everything through the lens of his faith—it’s inspiring to see his unabashed willingness to be himself.

All this to say, I must also admit—if indeed Rodgers was being sarcastic in his recent comments, and it seems that he was—I found what he said to be comical, and, yes, witty.

Isn’t it interesting that this same topic—whether or not God cares about who wins or loses—seems to come up each and every year? Just two years ago, Sports Illustrated ran a cover story featuring Ray Lewis with the headline: “Does God care who wins the Super Bowl?”

And now, here we are once more.

In a society where athletes make mainstream news for bringing God into winning and losing, what can we learn from all this? Primarily, I think we must be careful when we bring up God’s name, particularly when it comes to matters of success and winning. We must consider our intentions. God is not a good-luck charm. He is the Almighty, the Creator of the heavens and the earth, the One who intricately knit us together in our mothers’ wombs. The only response to a grace such as this is awe, and even fear perhaps because of its profundity.

In our last issue, I wrote a column that challenged readers to reflect a God that we can’t explain more than a God that we can explain, to gain mystery and wonder in our approach to spirituality instead of playing the “God card.” This column is sort of a Part II. Does God have the power to knock a football out of Dez Bryant’s hands in the playoffs? Sure. But unless I see the incarnate Christ hit Bryant in the gut (not helmet to helmet) and knock the ball loose, I’d rather dwell on the fact that He created the stars or died for me. It’s less complicated, or perhaps more complicated. And it’s certainly more wondrous and mysterious.

I’m grateful Rodgers’ comments brought this topic to light once more because I think it’s an important question every Christian must answer: Does God care who experiences success or who wins in life?

What’s interesting about this whole idea of success and winning is that Jesus shattered the mold for all of this. He was the exact opposite of what people expected the Messiah to be. He was not a king who overthrew the Roman government. He was a suffering Savior who came to save humanity from their sins. His victory was set into motion by a horrific death on a wooden cross. And yet, it is the greatest victory this world has ever seen.

Author and pastor Tim Keller puts it this way: “The gospel is the ultimate story that shows victory coming out of defeat, strength coming out of weakness, life coming out of death, rescue from abandonment. And because it is a true story, it gives us hope because we know that life is really like that.”

Maybe if we allow ourselves to understand the depth and beauty of victory in its truest sense, then we will have a different perspective on what it truly means to win and experience success in this world.

And it will likely be a victory we never expected.

This column was published in Sports Spectrum’s Fall 2015 DigiMag. Log in HERE to view the issue. Subscribe HERE to receive eight issues of Sports Spectrum a year.