Benjamin Watson is a tight end for the Baltimore Ravens and has played in the NFL for the past 13 seasons. He’s won a Super Bowl, played in another, and caught passes from Tom Brady and Drew Brees.

Watson has also been one of the most outspoken voices in sports on many different issues, from race, to politics, to religion. A couple of years ago, Benjamin wrote a deeply personal book on faith and race titled Under Our Skin: Getting Real About Race. Getting Free From the Fears and Frustrations That Divide Us. Now, Watson wants to use his platform to help men. Specifically, men who are about to become new fathers. 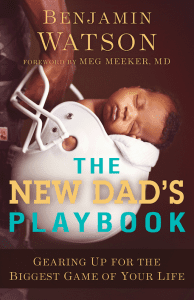 Many sports fans know Watson as a football player but Watson says his most important job, the biggest game of his life, is parenting. And that’s why he has written the new book The New Dad’s Playbook: Gearing Up For The Biggest Game Of Your Life.

As the dad of five children from ages nine months to seven years, Watson has had plenty of practice to fine-tune the role of parent. In the book, Watson explains the processes of pregnancy, childbirth and child-rearing with excellent advice and very real and personal anecdotes.

“Men should be involved in their children’s lives, from conception to adulthood,” writes Watson. “For the moment, accept that there will be some things you just aren’t good at – at least, not right away. Have you changed a diaper? Practice makes perfect.”

He says he has thought about writing this type of book for a while and knows the purpose and meaning behind is it to give back all that he has learned through parenting five children and help men walk through the growing pains of becoming a Dad for the first time.

“The whole purpose is to encourage men to, No. 1, support the women who are having their children,” Watson told BaltimoreRavens.com. “Support them through pregnancy and through birth and those first weeks when they come home. But it’s also to give men knowledge about the practical and medical terms that they are going to hear, and to encourage them that they have what it takes, and to empower them to live this thing out from a place of strength and leadership instead of a place of fear, because it can be a scary time.”

Parenting isn’t easy. It’s a process that those of us as Dads continue to learn and grow with each day. We’re thankful for men like Benjamin Watson, who are using their platform and status as an NFL player to give back, help others and point people back to Jesus.

You can purchase Benjamin Watson’s new book “The New Dad’s Playbook” on Amazon and everywhere else books are sold.