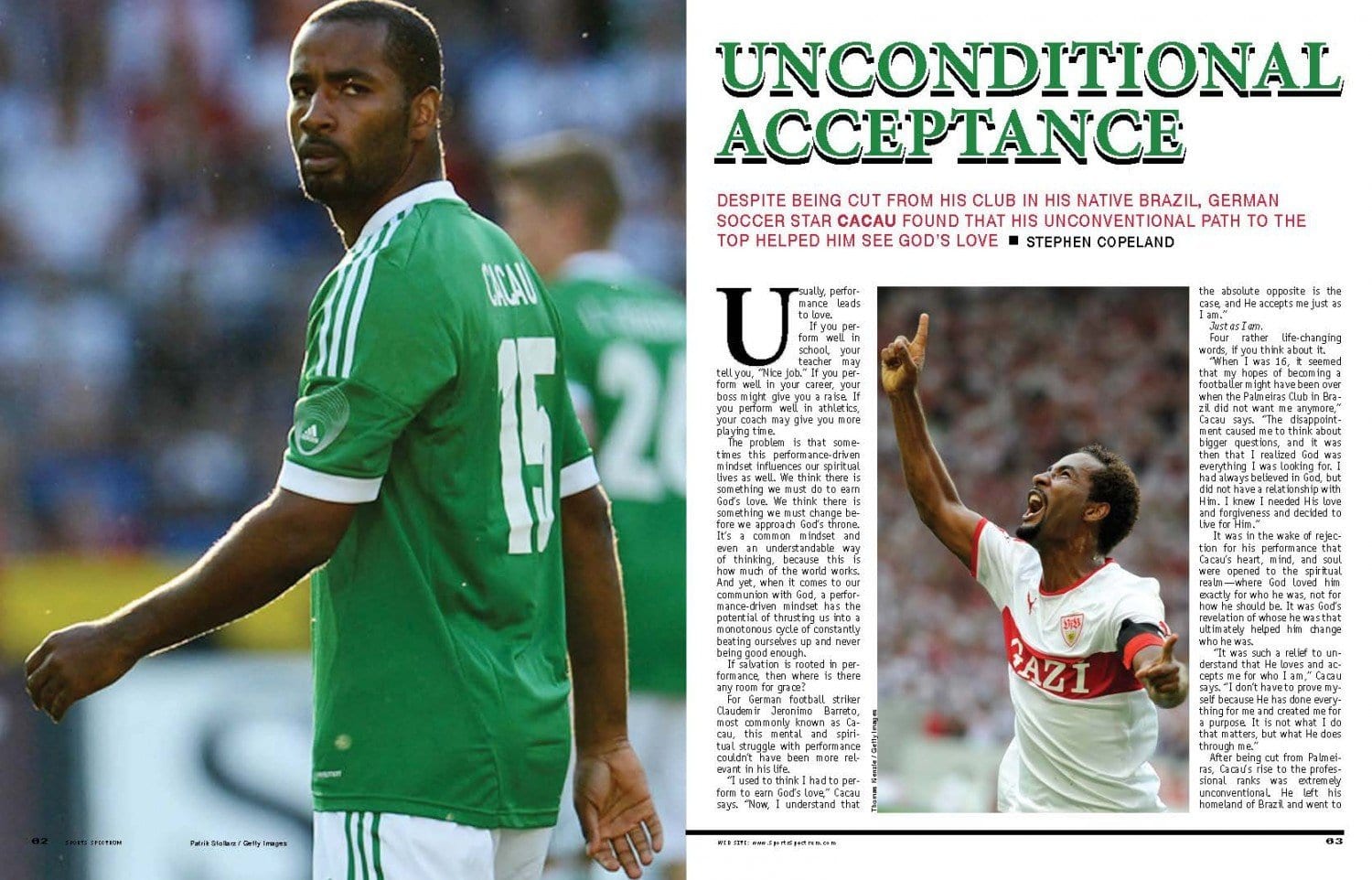 The problem is that sometimes this performance-driven mindset influences our spiritual lives as well. We think there is something we must do to earn God’s love. We think there is something we must change before we approach God’s throne. It’s a common mindset and even an understandable way of thinking, because this is how much of the world works. And yet, when it comes to our communion with God, a performance-driven mindset has the potential of thrusting us into a monotonous cycle of constantly beating ourselves up and never being good enough.

If salvation is rooted in performance, then where is there any room for grace?

For German football striker Claudemir Jeronimo Barreto, most commonly known as Cacau, this mental and spiritual struggle with performance couldn’t have been more relevant in his life.

“I used to think I had to perform to earn God’s love,” Cacau says. “Now, I understand that the absolute opposite is the case, and He accepts me just as I am.”

Four rather life-changing words, if you think about it.

“When I was 16, it seemed that my hopes of becoming a footballer might have been over when the Palmeiras Club in Brazil did not want me anymore,” Cacau says. “The disappointment caused me to think about bigger questions, and it was then that I realized God was everything I was looking for. I had always believed in God, but did not have a relationship with Him. I knew I needed His love and forgiveness and decided to live for Him.”

It was in the wake of rejection for his performance that Cacau’s heart, mind, and soul were opened to the spiritual realm—where God loved him exactly for who he was, not for how he should be. It was God’s revelation of whose he was that ultimately helped him change who he was.

“It was such a relief to understand that He loves and accepts me for who I am,” Cacau says. “I don’t have to prove myself because He has done everything for me and created me for a purpose. It is not what I do that matters, but what He does through me.” 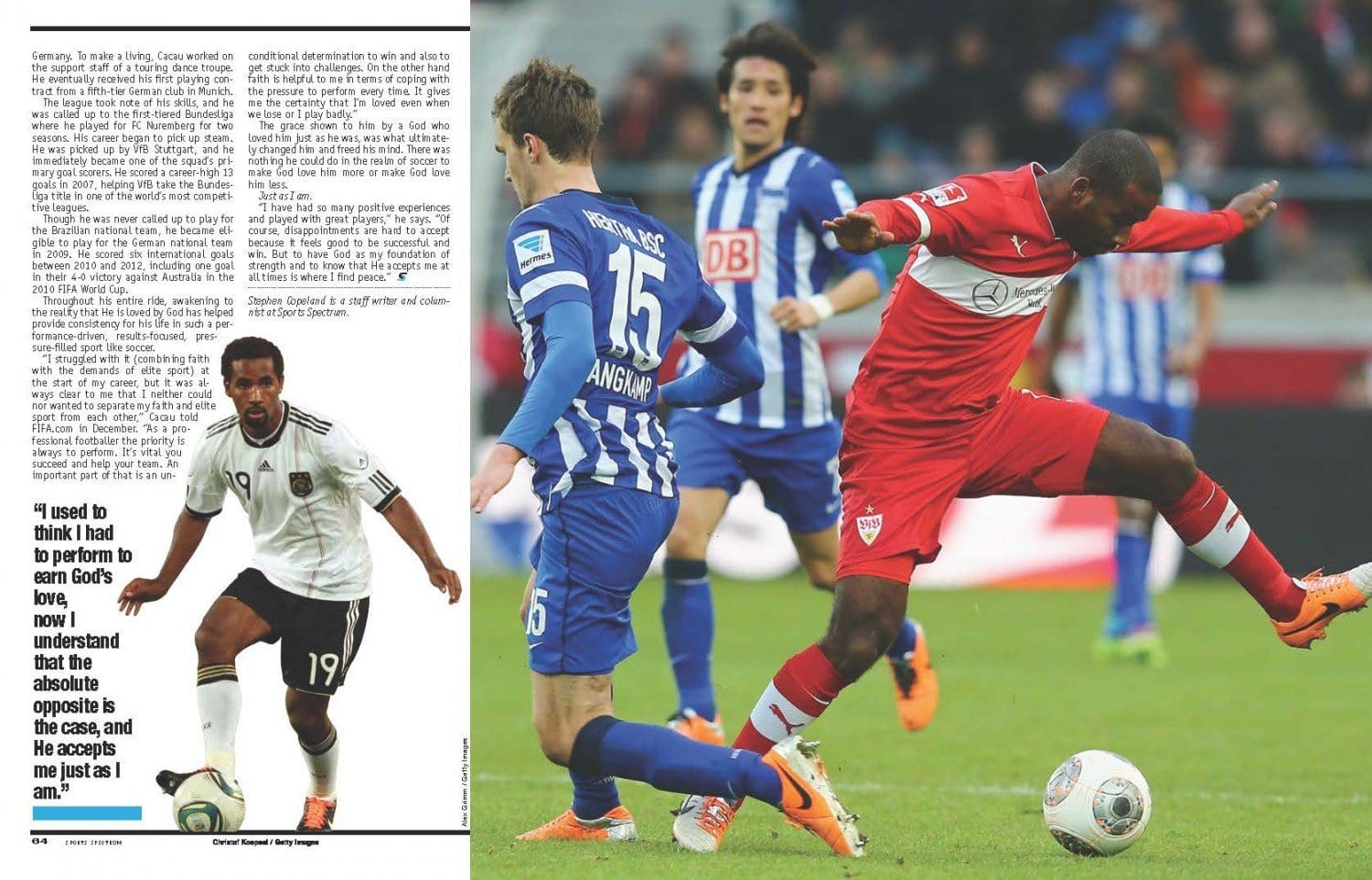 After being cut from Palmeiras, Cacau’s rise to the professional ranks was extremely unconventional. He left his homeland of Brazil and went to Germany. To make a living, Cacau worked on the support staff of a touring dance troupe. He eventually received his first playing contract from a fifth-tier German club in Munich.

The league took note of his skills, and he was called up to the first-tiered Bundesliga where he played for FC Nuremberg for two seasons. His career began to pick up steam. He was picked up by VfB Stuttgart, and he immediately became one of the squad’s primary goal scorers. He scored a career-high 13 goals in 2007, helping VfB take the Bundesliga title in one of the world’s most competitive leagues.

Throughout his entire ride, awakening to the reality that He is loved by God has helped provide consistency for his life in such a performance-driven, results-focused, pressure-filled sport like soccer.

“I struggled with it (combining faith with the demands of elite sport) at the start of my career, but it was always clear to me that I neither could nor wanted to separate my faith and elite sport from each other,” Cacau told FIFA.com in December. “As a professional footballer the priority is always to perform. It’s vital you succeed and help your team. An important part of that is an unconditional determination to win and also to get stuck into challenges. On the other hand faith is helpful to me in terms of coping with the pressure to perform every time. It gives me the certainty that I’m loved even when we lose or I play badly.”

The grace shown to him by a God who loved him just as he was, was what ultimately changed him and freed his mind. There was nothing he could do in the realm of soccer to make God love him more or make God love him less.

“I have had so many positive experiences and played with great players,” he says. “Of course, disappointments are hard to accept because it feels good to be successful and win. But to have God as my foundation of strength and to know that He accepts me at all times is where I find peace.”