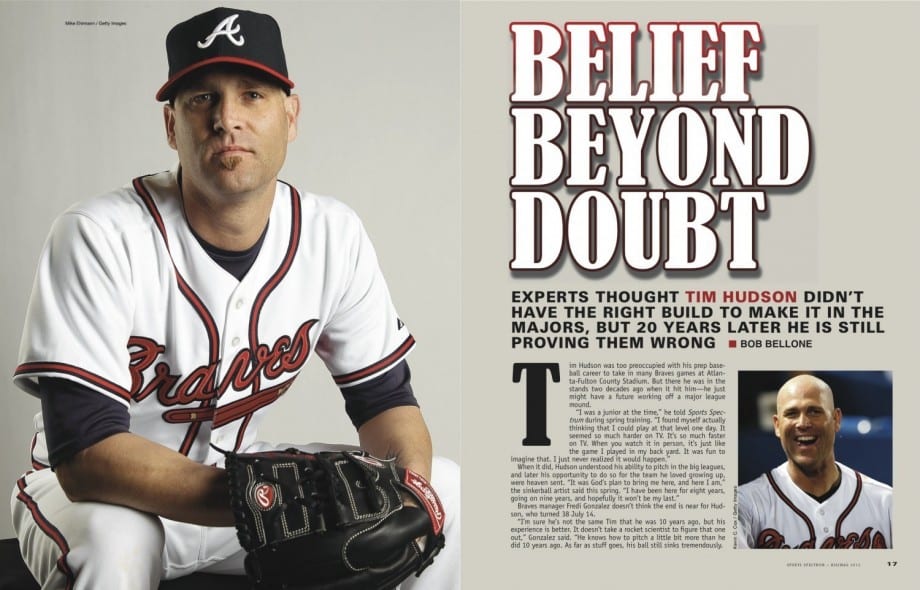 Tim Hudson was too preoccupied with his prep baseball career to take in many Braves games at Atlanta-Fulton County Stadium. But there he was in the stands two decades ago when it hit him—he just might have a future working off a major league mound.

“I was a junior at the time,” he told Sports Spectrum during spring training. “I found myself actually thinking that I could play at that level one day. It seemed so much harder on TV. It’s so much faster on TV. When you watch it in person, it’s just like the game I played in my back yard. It was fun to imagine that. I just never realized it would happen.”

When it did, Hudson understood his ability to pitch in the big leagues, and later his opportunity to do so for the team he loved growing up, were heaven sent. “It was God’s plan to bring me here, and here I am,” the sinkerball artist said this spring. “I have been here for eight years, going on nine years, and hopefully it won’t be my last.”

Braves manager Fredi Gonzalez doesn’t think the end is near for Hudson, who turned 38 July 14.

“I’m sure he’s not the same Tim that he was 10 years ago, but his experience is better. It doesn’t take a rocket scientist to figure that one out,” Gonzalez said. “He knows how to pitch a little bit more than he did 10 years ago. As far as stuff goes, his ball still sinks tremendously.

His slider and his secondary pitches are great. He won 16 games last year, and we didn’t start him until May.”

Gonzalez also withheld the ball from Hudson in a do-or-die showdown with the St. Louis Cardinals for a wild card berth last year. The assignment was awarded to former relief pitcher Kris Medlen, who was practically unhittable after his escape from the bullpen in late July and finished the regular season with a 10-1 record and 1.57 ERA overall.

Moreover, Atlanta was riding a major-league record string of 23 consecutive victories in games started by Medlen dating to 2010, but St. Louis foiled the plan and deprived Hudson of a seventh year of playoff experience. This season, Gonzalez rewarded the team-oriented veteran with the honor of his sixth Opening Day start. The rest of the pitching staff was content in the shadow of a teammate with a long history of nothing but winning records at the highest level and a willingness to share his expertise.

“He’s better than a coach because with the coaching staff and the players there’s a little bit of separation with personal relationships on and off the field,” Medlen said. “He talks to the rookies, talks to the guys on the other side of the clubhouse. It’s really cool to see. He always treats you how he wants to be treated. He realizes he was in the same spot at one time in his career. He’s very accepting of the younger guys, and he likes to set an example. He’s a perfect veteran guy for that job.”

“He’s down in the bullpens all the time, not only if he’s throwing a bullpen, but he’ll stay down and watch some of the younger pitchers throw bullpens and offer some advice,” McDowell said. “Usually that’s when I walk away, because I know that they’re getting the right information.”

Sound advice was lacking from major college and professional scouts, who dwelled more on Hudson’s slight build as a Glenwood School senior than his 12-1 record and 1.78 ERA that helped produce a 1993 Alabama state title. Undaunted, he stayed home in Phenix City and continued his development at Chattahoochee Valley Community College.

By twice achieving All-America status as a team leader in key pitching and hitting categories, Hudson was awarded a scholarship to Auburn University. The right-hander became equally dominant in two seasons there, aided by a lower arm angle on his delivery and the addition a split-finger fastball to his repertoire. Hudson peaked as a senior en route to the College World Series. His 15-2 record and 2.97 ERA, combined with a .396 batting average, 18 homers and 95 runs batted in, resulted in unprecedented dual First Team All-SEC honors as a pitcher and an outfielder.

The Oakland A’s took notice of Hudson, winner of the Rotary Smith Award as the nation’s top collegian, and selected him in the sixth round of the 1997 amateur draft. Two years later, he fulfilled his big-league dream and posted an 11-2 record, 3.23 ERA and team-leading 132 strikeouts despite toiling in the minors until early June.

In his second season, Hudson produced a career-high 20 victories, the first of his four high finishes in Cy Young Award balloting, and the first of his three All-Star Game appearances, fittingly, in Atlanta. By the winter of 2004, the Braves wanted to see him in town on a regular basis and essentially stole him from the A’s in a trade for Juan Cruz, Dan Meyer and Charles Thomas.

Turner Field was the site of another career highlight for Hudson on April 30, when he limited the Washington Nationals to three hits over seven innings for his 200th victory. And reminiscent of his early days in baseball, he chipped in offensively with a double and a home run.

Hudson would have reached the milestone sooner, but he was shut down four months into the 2008 season to undergo Tommy John surgery on his pitching elbow and didn’t resurface for more than a year. The Braves remained so confident in Hudson, they signed him to a three-year extension. He immediately rewarded them with a season worthy of National League Comeback Player of the Year honors.

During one stretch of 15 years in charge of the Atlanta dugout, retired manager Bobby Cox produced 14 division champions, five National League pennants and a World Series crown. Behind that success were such elite pitchers as John Smoltz, Greg Maddux, Tom Glavine and their great admirer – Hudson.

“He’s right in the mix with all those guys,” Cox said. “He’s been a winner ever since he signed on with us. He’s had a tremendous career, and he’s still on top of his game. Tim is the world’s greatest competitor, and that goes a long way.”

Hudson also works tirelessly away from the game. A devoted Christian, he and his wife Kim operate the Hudson Family Foundation, which is committed to helping children in need of physical, emotional or financial support.