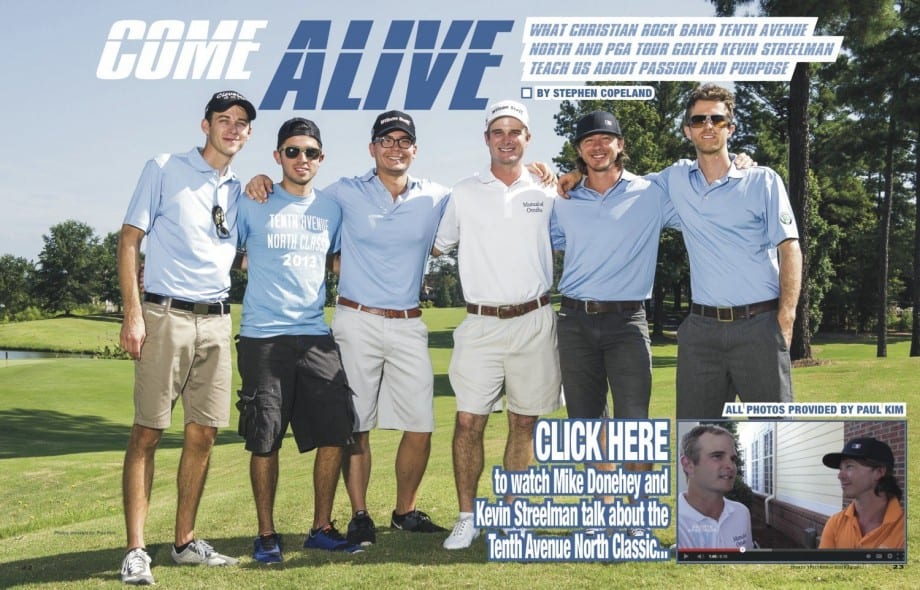 So much of life seems to be a search for life.

Purpose and love and happiness seem to be buried somewhere in a far-off desert. Some find it. Some don’t. But all search.

“God’s will” seems to be locked in a treasure chest sitting on the ocean floor in the remains of a sunken ship. The search, the swim, is exhausting.

Purpose Has No Bounds

What surprises most about Mark Bentley is that he’s only 21 years old. He is a junior at Southeastern Theological Seminary in Wake Forest, N.C. He is a college kid.

Yet here is Bentley on this August day at the Tenth Avenue North Golf Classic, organizing the entire tournament, driving a cart all day around Brier Creek Golf Club in Raleigh, N.C., making sure everything runs smoothly, standing on stage that evening with a microphone in front of hundreds of Raleigh’s premier movers and shakers as he raises money for Christian ministries.

The crazy thing is that Bentley has been organizing events and fundraising since he was 16 years old as a junior in high school. Growing up watching both of his parents work for Campus Crusade for Christ, he learned early on about different models for outreach and fundraising.

He eventually decided to apply everything he had learned to one of his biggest passions in life: golf.

“I remember learning about giving God glory in everything,” Bentley recalls. “I asked myself, ‘How can I do this in golf?’”

Bentley and his friends dreamed up a weekend retreat for high school golfers in Pinehurst, N.C. His goal was to reach out to PGA Tour golfer Webb Simpson and see if he would want to be the keynote speaker. Simpson, who, at the time, had just earned his Tour card, was a longtime family acquaintance of Bentley. Outside of Simpson’s hometown of Raleigh and his alma mater Wake Forest University, few knew his name.

Next thing Bentley knew he was sitting in Panera Bread one Monday morning, when none other than Simpson walked in. Bentley approached Simpson with the idea.

“Man, this is crazy,” Simpson told Bentley. “I’ve been praying for 2-3 years on how to reach out to high school guys.”

“I’ve been praying for 2-3 years on how to use golf for the glory of God,” Bentley told Simpson.

Each year, Bentley fundraises so it’s affordable to high school golfers. The first two years, it was free.

“Through doing those events, it gave me a heart and passion for business and golf,” Bentley says. “I always have these crazy ideas. And I decided I wanted to combine those passions for the purpose of raising money for a Christian mission. I started praying about it.”

Two months later, Jeff Owen, the lead guitarist for Tenth Avenue North, texted Bentley, who was in college by this time. Tenth Avenue North had been long-time supporters of Cru RDU, Bentley’s parents’ ministry, long before they burst onto the Christian music scene in 2009 and emerged as one of the most popular contemporary Christian bands. 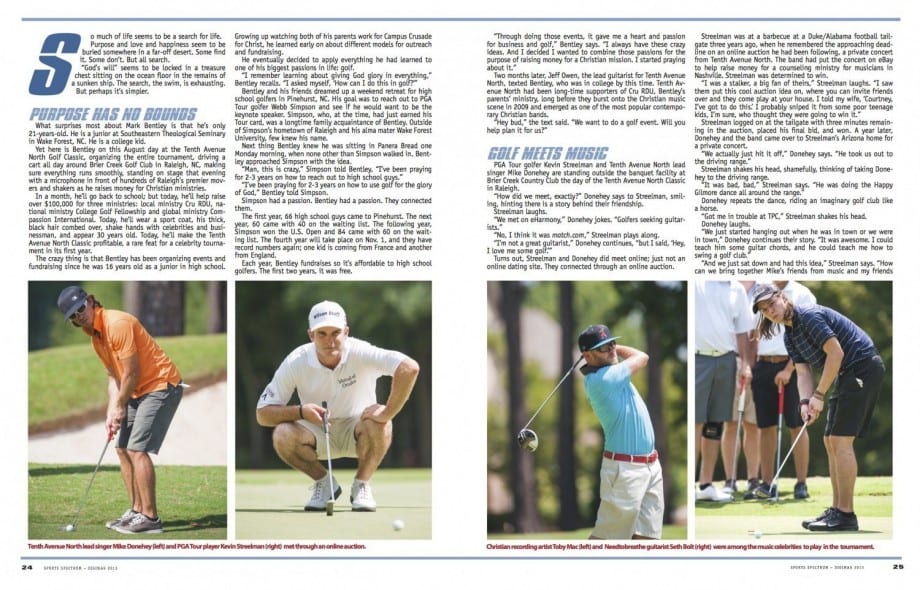 “How did we meet, exactly?” Donehey says to Streelman, smiling, hinting there is a story behind their friendship.

“No, I think it was match.com,” Streelman plays along.

Turns out, Streelman and Donehey did meet online; just not an online dating site. They connected through an online auction.

Streelman was at a barbecue at a Duke/Alabama football tailgate three years ago, when he remembered the approaching deadline on an online auction he had been following, a private concert from Tenth Avenue North. The band had put the concert on eBay to help raise money for a counseling ministry for musicians in Nashville. Streelman was determined to win.

“I was a stalker, a big fan of theirs,” Streelman laughs. “I saw them put this cool auction idea on, where you can invite friends over and they come play at your house. I told my wife, ‘Courtney, I’ve got to do this.’ I probably sniped it from some poor teenage kids, I’m sure, who thought they were going to win it.”

Streelman logged on at the tailgate with three minutes remaining in the auction, placed his final bid, and won. A year later, Donehey and the band came over to Streelman’s Arizona home for a private concert.

“We actually just hit it off,” Donehey says. “He took us out to the driving range.”

Streelman shakes his head, shamefully, thinking of taking Donehey to the driving range.

“It was bad, bad,” Streelman says. “He was doing the Happy Gilmore dance all around the range.”

Donehey repeats the dance, riding an imaginary golf club like a horse.

“Got me in trouble at TPC,” Streelman shakes his head.

“We just started hanging out when he was in town or we were in town,” Donehey continues their story. “It was awesome. I could teach him some guitar chords, and he could teach me how to swing a golf club.”

“And we just sat down and had this idea,” Streelman says. “How can we bring together Mike’s friends from music and my friends from golf?” 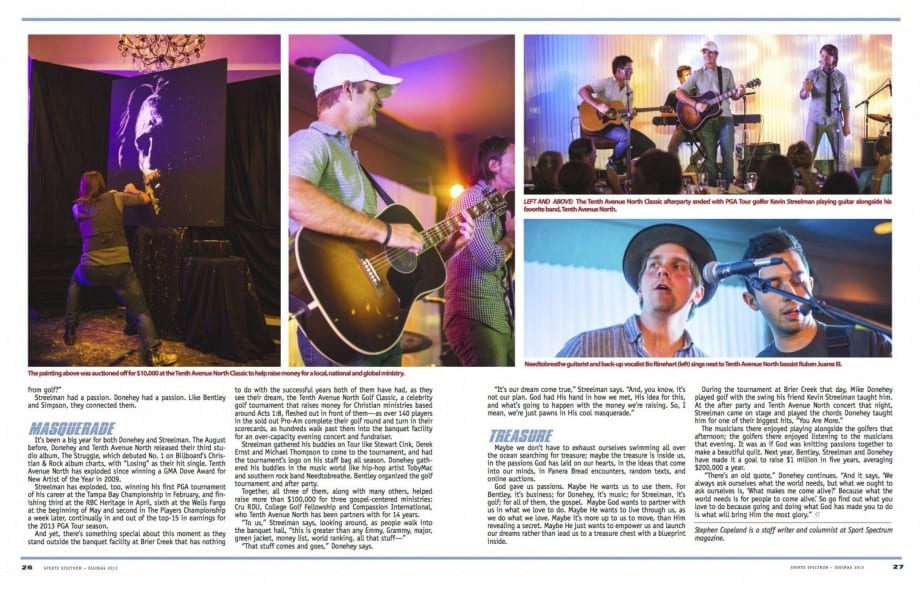 It’s been a big year for both Donehey and Streelman. The August before, Donehey and Tenth Avenue North released their third studio album, The Struggle, which debuted No. 1 on Billboard’s Christian & Rock album charts, with “Losing” as their hit single. Tenth Avenue North has exploded since winning a GMA Dove Award for New Artist of the Year in 2009.

Streelman has exploded, too, winning his first PGA tournament of his career at the Tampa Bay Championship in February, and finishing third at the RBC Heritage in April, sixth at the Wells Fargo at the beginning of May and second in The Players Championship a week later, continually in and out of the top-15 in earnings for the 2013 PGA Tour season.

And yet, there’s something special about this moment as they stand outside the banquet facility at Brier Creek that has nothing to do with the successful years both of them have had, as they see their dream, the Tenth Avenue North Golf Classic, a celebrity golf tournament that raises money for Christian ministries based around Acts 1:8, fleshed out in front of them—as over 140 players in the sold out Pro-Am complete their golf round and turn in their scorecards, as hundreds walk past them into the banquet facility for an over-capacity evening concert and fundraiser.

Together, all three of them, along with many others, helped raise more than $100,000 for three gospel-centered ministries: Cru RDU, College Golf Fellowship and Compassion International, who Tenth Avenue North has been partners with for 14 years.

“To us,” Streelman says, looking around, as people walk into the banquet hall, “this is greater than any Emmy, Grammy, major, green jacket, money list, world ranking, all that stuff—”

“It’s our dream come true,” Streelman says. “And, you know, it’s not our plan. God had His hand in how we met, His idea for this, and what’s going to happen with the money we’re raising. So, I mean, we’re just pawns in His cool masquerade.”

Maybe we don’t have to exhaust ourselves swimming all over the ocean searching for treasure; maybe the treasure is inside us, in the passions God has laid on our hearts, in the ideas that come into our minds, in Panera Bread encounters, random texts, and online auctions.

God gave us passions. Maybe He wants us to use them. For Bentley, it’s business; for Donehey, it’s music; for Streelman, it’s golf; for all of them, the gospel.  Maybe God wants to partner with us in what we love to do. Maybe He wants to live through us, as we do what we love. Maybe it’s more up to us to move, than Him revealing a secret. Maybe He just wants to empower us and launch our dreams rather than lead us to a treasure chest with a blueprint inside.

During the tournament at Brier Creek that day, Mike Donehey played golf with the swing his friend Kevin Streelman taught him. At the after party and Tenth Avenue North concert that night, Streelman came on stage and played the chords Donehey taught him for one of their biggest hits, “You Are More.”