From the Archives: 100 Percent 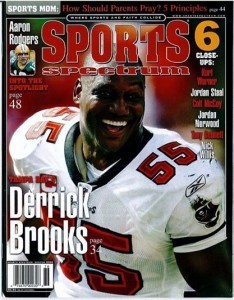 Former NFL linebacker Derrick Brooks is now in the Hall of Fame. Here is a throwback story when he was featured on the cover of Sports Spectrum’s Winter 2009 issue.

The glass atrium of the Tampa Bay Buccaneers’ posh headquarters is adorned with exhibits commemorating the history of the franchise.The most striking is a statue featuring life-sized images of coach Jon Gruden and eight standout players reveling in their 48-21 victory against the Oakland Raiders in Super Bowl XXXVII.

Among the sculpted figures is one of Derrick Brooks, whose character off the football field is symbolized in a less conspicuous display nearby. A poster, promoting of the the future Hall of Fame linebacker’s man philanthropic endeavors, grabs the eye with his autograph and a favorite verse of scripture near the bottom.