Basketball From The Archives Sport

From the Archives: The Mark of a Champion 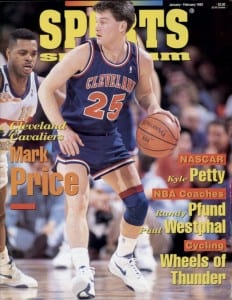 With the Cleveland Cavaliers advancing to the NBA Finals, here is an archived story on Mark Price (who spent the first nine years of his career with the Cavs) from our January/February 1993 issue…

It’s 11:30 Tuesday morning and practice is nearing an end. Sweat drips from every forehead at the Cleveland Cavaliers run the floor in a controlled, full-court scrimmage. As back-up point guard Terrell Brandon breaks for the ball, he slides off a pick and gets tangled up with forward Danny Ferry. The two Cavs exchange a flying elbow and a headlock before teammates can separate the players….

Click HERE to read the remainder of our cover story on Mark Price from our January/February 1993 issue.