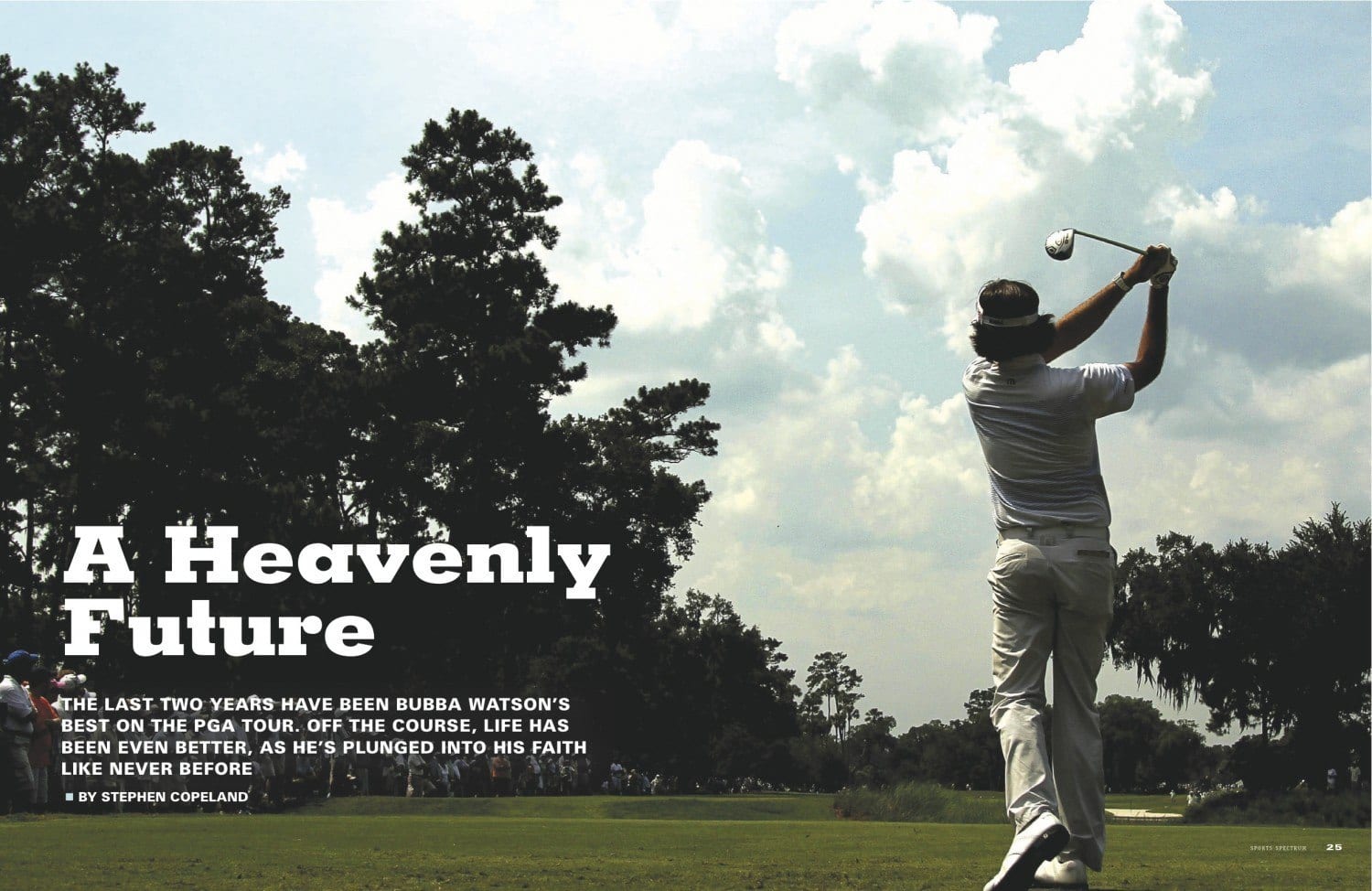 Standing in the middle of the woods Easter Sunday on the second playoff hole at Augusta National, Bubba Watson hit a miraculous 155-yard pitching wedge onto the green, setting him up for his first major victory. And though his golf career has exploded over the last two and a half years, the 2012 Masters champion will tell you that his life has been even better off the course. Though marked by the tragic passing of his father in 2010, Watson has witnessed change in his own life and the lives of his family members. And after his Masters victory, he returned home to his wife Angie and 1-month old adopted son Caleb with the coveted green jacket. The story below about Bubba’s faith was published in the Winter 2012 issue of Sports Spectrum.

Bubba Watson’s phone rang. His dad was calling. “If this is truth, if God is truth—you better start practicing,” Gerry said once Bubba picked up the phone. “Why do I need to practice?” said a confounded Bubba, who was having his best PGA Tour season yet.

“You better practice because by the time you get to heaven, I’m going to be so good at golf.”

Bubba tried to stay collected. Fighting joyful and alleviating tears, he resorted to what he knows best…humor.

“Dad,” Bubba said, about to poke fun at his father’s golf game. “Heaven’s not that good.”

The truth is that heaven is that good, and Bubba knew it…and it may be even better because his dad’s going to be there.

Two months before, on June 27, 2010, in Cromwell, Conn., Bubba had rallied from six strokes back to earn his first PGA Tour victory at the Travelers Championship— then broke down in his post-round interview as he thought about his father who was slowly losing his lengthy battle with throat cancer.

“Gotta say thanks to my mom and dad, without them I’m nothing,” Bubba choked after defeating Scott Verplank on the second playoff hole at TPC River Highlands’ par-3 16th. “My dad’s battling cancer right now. Dad, I’m praying for ya. I love you.”

Before the interview, only a handful of people in Bubba’s circle knew his father was fighting cancer. Now, the whole golf world knew. And perhaps most importantly, Gerry, whom Bubba and his caddy, Teddy Scott, were trying to witness to, now knew his son was praying for him.

Following the victory, Bubba and Scott decided they needed to talk to Gerry about Jesus…before it was too late. They concluded that calling him would be ineffective because Gerry would hang up. Writing a letter, however, had a chance because Gerry loved to read. So that’s what Scott did.

“The letter basically just said, ‘Your son is a great kid, but who cares that he won a golf tournament? He wants you to know that he loves the Lord and he’d love for you to be in heaven with him,’” Bubba recalls.

When Bubba’s phone rang that August day in 2010, Bubba had no idea his dad was going to talk about God, heaven and salvation for the first time—that he was going to profess his faith.

“That’s the thing about being a Christian,” Bubba says. “Nothing is too big for God. We can’t comprehend that because He is the Almighty. But anything He wants to do, He can do it.”

Bubba remained composed on the phone with his dad, but after that, it was as if he was back on the 16th green at TPC River Highlands, overcome with emotion about his father. The first thing Bubba did was call his wife, Angie Watson, and cry. Then he called Scott and cried again.

“It showed me that God is in control,” Bubba says. “He knows what He’s doing.”

In mid-October, a little over a month after their conversation, Gerry Watson died. 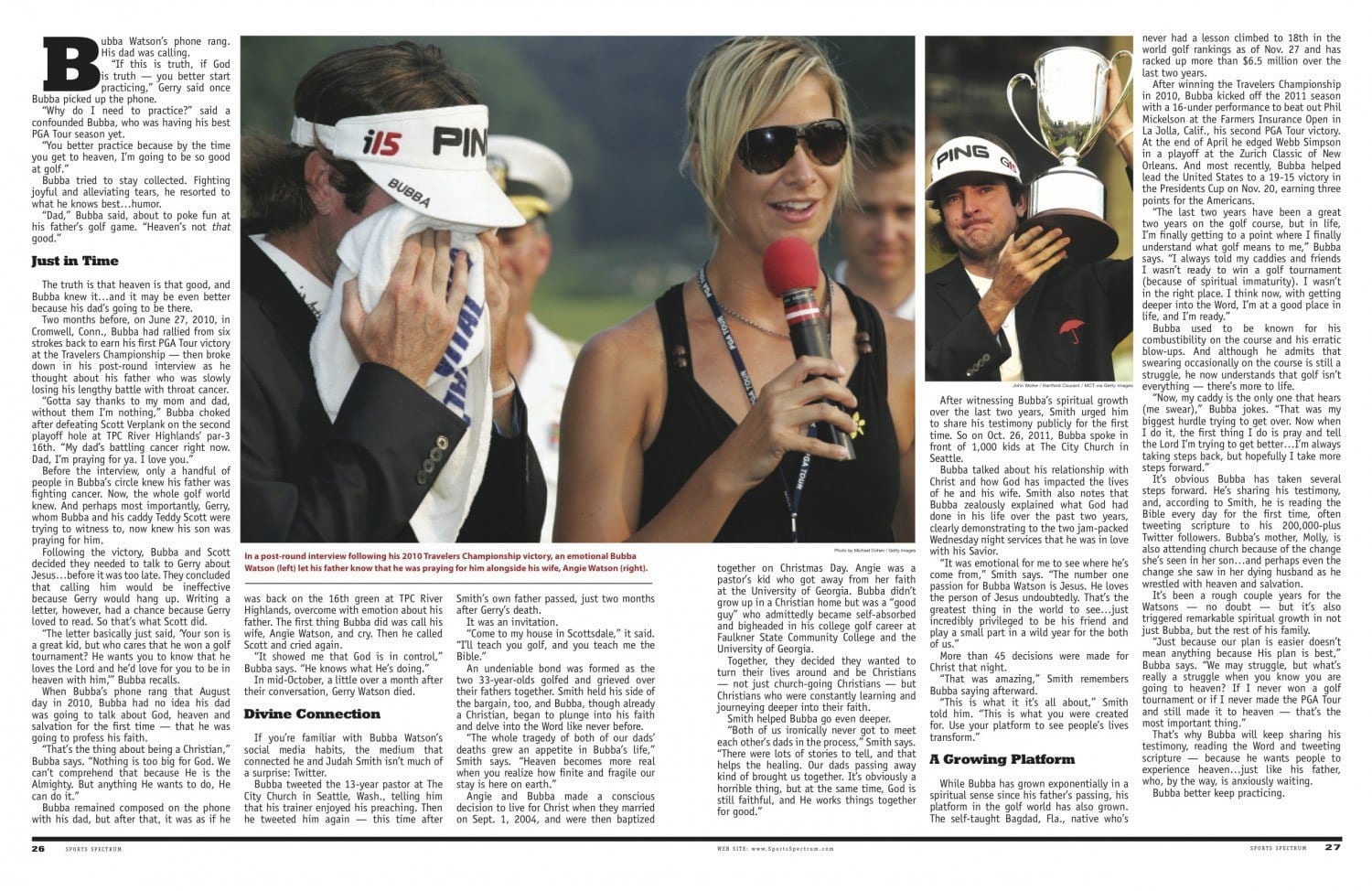 If you’re familiar with Bubba Watson’s social media habits, the medium that connected he and Judah Smith isn’t much of a surprise: Twitter.

Bubba tweeted the 13-year pastor at The City Church in Seattle, Wash., telling him that his trainer enjoyed his preaching. Then he tweeted him again—this time after Smith’s own father passed, just two months after Gerry’s death.

It was an invitation.

“Come to my house in Scottsdale,” it said. “I’ll teach you golf, and you teach me the Bible.”

An undeniable bond was formed as the two 33-year-olds golfed and grieved over their fathers together. Smith held his side of the bargain, too, and Bubba, though already a Christian, began to plunge into his faith and delve into the Word like never before.

“The whole tragedy of both of our dads’ deaths grew an appetite in Bubba’s life,” Smith says. “Heaven becomes more real when you realize how finite and fragile our stay is here on earth.”

Angie and Bubba made a conscious decision to live for Christ when they married on Sept. 1, 2004, and were then baptized together on Christmas Day. Angie was a pastor’s kid who got away from her faith at the University of Georgia. Bubba didn’t grow up in a Christian home but was a “good guy” who admittedly became self-absorbed and bigheaded in his college golf career at Faulkner State Community College and the University of Georgia.

Together, they decided they wanted to turn their lives around and be Christians — not just church-going Christians — but Christians who were constantly learning and journeying deeper into their faith.

“Both of us ironically never got to meet each other’s dads in the process,” Smith says. “There were lots of stories to tell, and that helps the healing. Our dads passing away kind of brought us together. It’s obviously a horrible thing, but at the same time, God is still faithful, and He works things together for good.”

After witnessing Bubba’s spiritual growth over the last two years, Smith urged him to share his testimony publicly for the first time. So on Oct. 26, 2011, Bubba spoke in front of 1,000 kids at The City Church in Seattle.

Bubba talked about his relationship with Christ and how God has impacted the lives of he and his wife. Smith also notes that Bubba zealously explained what God had done in his life over the past two years, clearly demonstrating to the two jam-packed Wednesday night services that he was in love with his Savior.

“It was emotional for me to see where he’s come from,” Smith says. “The number one passion for Bubba Watson is Jesus. He loves the person of Jesus undoubtedly. That’s the greatest thing in the world to see…just incredibly privileged to be his friend and play a small part in a wild year for the both of us.”

More than 45 decisions were made for Christ that night.

“This is what it it’s all about,” Smith told him. “This is what you were created for. Use your platform to see people’s lives transform.”

While Bubba has grown exponentially in a spiritual sense since his father’s passing, his platform in the golf world has also grown. The self-taught Bagdad, Fla., native who’s never had a lesson climbed to fourth in the world with his victory at Augusta yesterday and has racked up more than $6.5 million combined in the 2011 and 2012 seasons.

“The last two years have been a great two years on the golf course, but in life, I’m finally getting to a point where I finally understand what golf means to me,” Bubba says. “I always told my caddies and friends I wasn’t ready to win a golf tournament (because of spiritual immaturity). I wasn’t in the right place. I think now, with getting deeper into the Word, I’m at a good place in life, and I’m ready.”

Bubba used to be known for his combustibility on the course and his erratic blow-ups. And although he admits that swearing occasionally on the course is still a struggle, he now understands that golf isn’t everything—there’s more to life.

“Now, my caddy is the only one that hears (me swear),” Bubba jokes. “That was my biggest hurdle trying to get over. Now when I do it, the first thing I do is pray and tell the Lord I’m trying to get better…I’m always taking steps back, but hopefully I take more steps forward.”

It’s obvious Bubba has taken several steps forward. He’s sharing his testimony, and, according to Smith, he is reading the Bible every day for the first time, often tweeting Scripture to his Twitter followers, which has skyrocketed to nearly 500,000 since his Masters win. Bubba’s mother, Molly, who gave her son an emotional embrace after yesterday’s victory, is also attending church because of the change she’s seen in her son…and perhaps even the change she saw in her dying husband as he wrestled with heaven and salvation.

It’s been a rough couple years for the Watsons—no doubt—but it’s also triggered remarkable spiritual growth in not just Bubba, but the rest of his family.

“Just because our plan is easier doesn’t mean anything because His plan is best,” Bubba says. “We may struggle, but what’s really a struggle when you know you are going to heaven? If I never won a golf tournament or if I never made the PGA Tour and still made it to heaven—that’s the most important thing.”

That’s why Bubba will keep sharing his testimony, reading the Word and tweeting scripture—because he wants people to experience heaven…just like his father, who, by the way, is anxiously waiting.

This story was published in the Winter 2012 issue of Sports Spectrum.