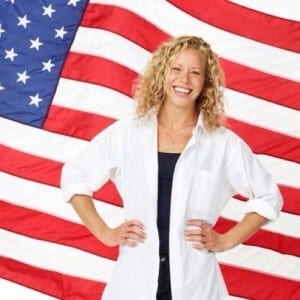 LONDON (BP) — At 15, American Brittany Viola thought she wasn’t good enough to be one of the top divers in the world because she didn’t look the part.

The young diver had been given an opportunity to train with Laura Wilkinson, the best diver in Viola’s event at the time (and a former Olympic gold medalist).

“As we trained together, I was also surrounded by some of the best divers in the world,” Viola, now 25, recalled. “I was only two years into the sport, so I wanted to know how I could become the best. One of the things that I saw was that these girls were in really good shape, and I had a little bit of a different body image than they did.”

Viola committed herself to losing weight and modeling what the other divers looked like. That commitment led to an eating disorder that plagued her for years until she became a Christian in college, and God’s grace helped her overcome it.

“I’ve moved a very long way,” said Viola, who will compete Wednesday and Thursday (Aug. 8-9) in the 10-meter platform diving competition in London. “It’s not something that’s completely invisible from my life. It definitely still remains. It’s just not even close to the extremes of what it used to be. It’s something that the Lord keeps pulling me out of with His truth, and I’m able to move further and further away from it with Him.”

As the teenaged Viola began noticing the physiques of her fellow divers, she began looking up different diets online. One of the big fads at the time was to cut out all carbohydrates, so Viola tried it.

It worked for a while, but then she started craving what her body was lacking. She couldn’t control herself when she actually ate bread. So instead of one piece, she ate three. Instead of one bowl of cereal, she ate four. The binging had started, and the purging was close behind.

“It escalated into something that took over my life,” Viola said. “It was something that got worse and worse, all in a pursuit to reach a picture, an image in my mind, that I thought would make me the best diver in the world.”

In 2006, at age 19, Viola entered Remuda Ranch, a Christian-based eating disorder facility. Viola had grown up going to a Catholic church, but not regularly. She only remembers wanting to go to sleep or not wanting to go to church at all, because she didn’t see the point in it.

At Remuda Ranch, a worker asked Viola if she wanted to get rid of her bulimia.

The woman shared the Gospel with Viola, who made a quick profession of faith. But she didn’t fully understand what kind of decision she had supposedly made, and a few weeks later returned home — right back into the struggles she had faced previously.

During her sophomore year at the University of Miami, a teammate of Viola’s invited her to church and started meeting with her weekly. The two studied the Gospel of John together.

“That was when I really started learning who God was and the truth that could really set me free from the struggles that I was having,” Viola said. “It’s been an awesome adventure since then.”

The issues surrounding her eating disorder didn’t disappear overnight. But through knowing God more closely and understanding the Bible more clearly, Viola said she learned her value as a creation of God that He knitted together.

“I’m His workmanship,” she said. “To know those things, that God has designed me the way that I am, helped me accept who I am and all the characteristics He’s given me.”

Viola’s faith now drives her worldview — including the purpose of diving.

“Everything is His,” she said. “He’s designed the sport. He’s designed me for it. The best diving is going to come out of me when I hand it over to Him.”

A member of University Baptist Church in Coral Gables, Fla., Viola added, “I know that the Lord is in me and He’ll dive through me if I just give that up to Him.”

Competing in her first Olympics, Viola said she’s only diving for one person.

“When I go to competitions, there are many divers that are diving for their family, or their coaches, or for themselves, for spectators and for others. I’m honestly only diving for the Lord,” she said.

“No matter the results, I know that I’m greatly loved.”

In the past, if she didn’t dive well, she felt like she had disappointed everyone.

“It doesn’t matter anymore if anyone’s disappointed,” she said. “Whatever I do, just walking forward on the platform, is what God wants me to do. When I jump off, I’m right where He wants me to be.”

THE INCREASE: A Hope that Does Not Disappoint - Luke Weaver