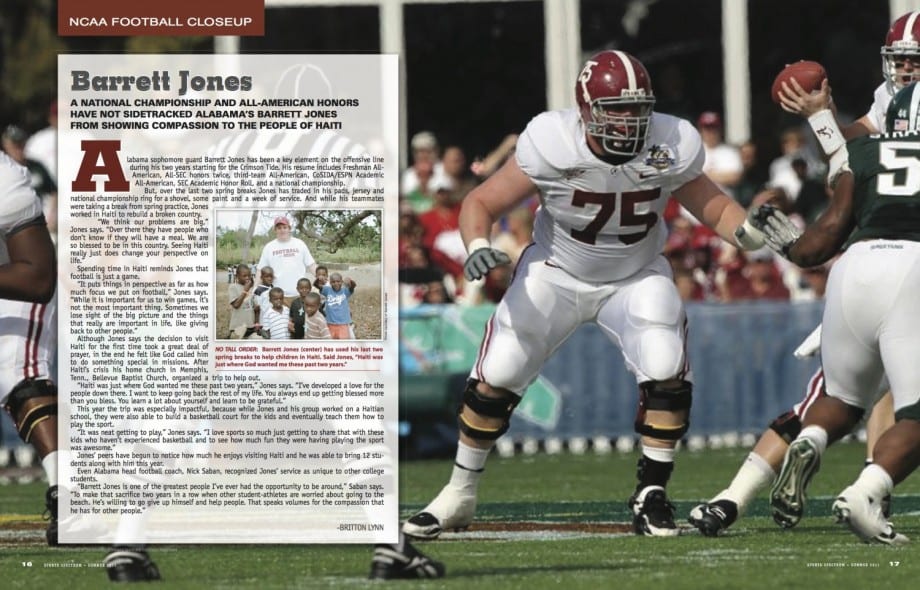 Tonight, Alabama center Barrett Jones and the Crimson Tide will take on Notre Dame for the BCS title. But Jones is more than just a football player concerned about winning games, he’s concerned about others and winning their hearts to Christ. Our story on Jones originally appeared in the Summer 2011 issue…

A National Championship and All-American honors have not sidetracked Alabama’s Barrett Jones from showing compassion to the people of Haiti.

“We think our problems are big,” Jones says. “Over there they have people who don’t know if they will have a meal. We are so blessed to be in this country. Seeing Haiti really just does change your perspective on life.”

Spending time in Haiti reminds Jones that football is just a game.

“It puts things in perspective as far as how much focus we put on football,” Jones says. “While it is important for us to win games, it’s not the most important thing. Sometimes we lose sight of the big picture and the things that really are important in life, like giving back to other people.”

Although Jones says the decision to visit Haiti for the first time took a great deal of prayer, in the end he felt like God called him to do something special in missions. After Haiti’s crisis his home church in Memphis,  Tenn., Bellevue Baptist Church, organized a trip to help out.

“Haiti was just where God wanted me these past two years,” Jones says. “I’ve developed a love for the people down there. I want to keep going back the rest of my life. You always end up getting blessed more than you bless. You learn a lot about yourself and learn to be grateful.”

This year the trip was especially impactful, because while Jones and his group worked on a Haitian school, they were also able to build a basketball court for the kids and eventually teach them how to play the sport.

“It was neat getting to play,” Jones says. “I love sports so much just getting to share that with these kids who haven’t experienced basketball and to see how much fun they were having playing the sport was awesome.”

Jones’ peers have begun to notice how much he enjoys visiting Haiti and he was able to bring 12 students along with him this year.

“Barrett Jones is one of the greatest people I’ve ever had the opportunity to be around,” Saban says. “To make that sacrifice two years in a row when other student-athletes are worried about going to the beach. He’s willing to go give up himself and help people. That speaks volumes for the compassion that he has for other people.”