Airing It Out -- Disagreement equals hate? 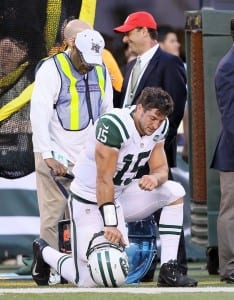 It’s official. The media is the new czar of morality.

Your Bible? They say it’s no longer valid. And what you individually believe? It’s no longer relevant either.

If you go against the media’s moral code, whether you are a liberal or a conservative, you are now bigoted and hateful.

It’s scary out there.

Why am I jumping to all of those conclusions? Well, apart from the fact that they are true, I’ll explain. Recently, some in the media targeted Tim Tebow for merely saying he would speak at a church that the media deemed anti-Semitic, hateful, intolerant and bigoted.

Because they deemed it that way, it was so.

Then, they directly targeted the pastor of the church, Robert Jeffress.

Tebow, in turn, called Jeffress and told him he wouldn’t be able to speak.

The church, First Baptist of Dallas, and its pastor aren’t anti-Semitic, hateful, intolerant or bigoted, unless we have now decided that disagreement equals anti-Semitism, hate, intolerance, and bigotry, which is what the media is doing.

Want proof? The Senior Religion Editor for the liberal-leaning Huffington Post, Paul Brandeis Raushenbush, wrote, “Just to be clear, First Baptist Dallas is not an outlier church. It is headed by Pastor Robert Jeffress, a very influential conservative Christian voice, who leads an 11,000 strong congregation connected to the Southern Baptist Convention. The theology and the constituency is squarely within the mainstream of contemporary right-wing Christian thought. But what has changed is that the views of the right-wing Christians are now officially out of step with the growing majority of Americans—including, apparently, Tim Tebow.”

So, if you disagree with the media’s form of morality or philosophy, you have exhibited hate and spewed hate speech—regardless that their logic is contradictory. How is it contradictory? Because, since they are equating disagreement with hate, when they disagree with someone else’s belief, philosophy, or ideology, they are, in essence, admitting that they hate and spew hate speech each time they make claims against others, too.

In a society where individuality has made us great, we are now being told that we must conform to the media’s standard or they’ll label us, intimidate us and, in essence, bully us into a corner until we do what they want us to do.

Tebow found out this the hard way.

The odd thing is that Christians have been told not to push their views on others for years, so why is the secular media doing that very thing to Christians?

Because, they don’t care.

The people, namely some of the free-thinking, liberal-minded ones who have championed open-mindedness and condemned what they call close-mindedness, are now close-minded. It’s their way or else. And the else comes with a price tag, which involves condemnation, bullying, lies and the twisting of facts to fit their belief.

If the media’s outrageous claims were true, then why did The Associated Press write a story about Jeffress several weeks prior to all of this controversy saying that Jeffress was one of the most compassionate preachers toward gays and lesbians?

And, if the media’s assertions were right, why did evangelical heavyweights rush to Jeffress’ aide? Lending support were James Dobson (Focus on the Family founder), David Jeremiah (who heads Turning Point Ministries and pastors Shadow Mountain Community Church outside of San Diego), Jack Graham (who served two terms as head of the Southern Baptist Convention), Dr. Al Mohler (President of Southern Baptist Theological Seminary) and Mike Huckabee (former pastor, Governor of Arkansas, a 2008 U.S. presidential candidate and current-host of Huckabee on Fox News TV and The Huckabee Show on the radio).

David Jeremiah said it best, “We now, as Christians, no longer have the right to believe what we believe without being painted as almost religious terrorists—and it’s just ridiculous.”

I agree, and I also agree with the spirit of what Dobson said, “You know what Robert? If these critics are going to get to you, they’re going to have to come through me first to get to you.”

Although I don’t have a choice who critics come through first, I stand with Dobson’s willingness to defend everyone’s freedom to disagree.

Disagreement doesn’t equal hate. If it did, then the media hates Jeffress, Dobson, me and everyone else merely for having a differing opinion than theirs.

This column was published in the March 2013 Sports Spectrum DigiMag and Volume 27, No. 2 print magazine. Print and digital subscribers, log in and view the issue here. Brett Honeycutt is the managing editor of Sports Spectrum magazine. His column addresses topics from a biblical perspective. Follow him on Twitter-@Brett_Honeycutt.