Airing It Out -- Offending the few 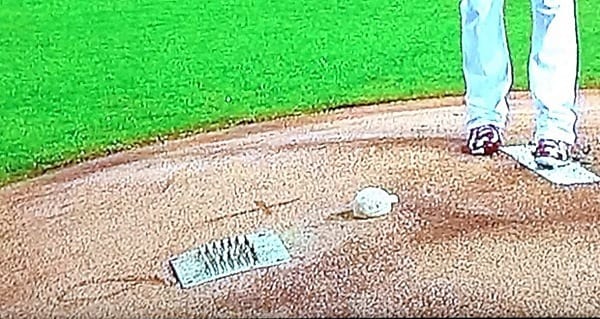 We are a hyper, oversensitive, society that cares about offending a few as opposed to offending the many.

And we do it in the name of diversity, tolerance, and, in the case of St. Louis Cardinals fan Michael Vines, being neutral on religion (or, in essence, being pro-atheist).

Vines, a St. Louis Cardinals fan and an atheist, said he was offended when he noticed that a cross and what he perceived to be a Christian fish symbol (it was “6” according to Cardinals pitcher, and Christian, Adam Wainwright) had been drawn on the backside of the mound at St. Louis’ Busch Stadium.

My response was: So what? When did offending Vines take precedence over offending Christians who are also fans of the St. Louis Cardinals and who liked having the symbol?

Vines called Busch Stadium a “place of hallowed ground not just for Christians, but for Cardinal fans of all religions, including none at all.”

Exactly. So, because Christians also follow the Cardinals, let the cross stay. And, because (apparently) atheists follow the team, let the rest of the places in Busch Stadium that don’t have a Christian symbol remain without a symbol. There. Issue solved. Christians could have a place on the mound (albeit in such a tiny place that Vines said he missed it numerous times before he spotted it) and atheists can have everywhere else. So, by having a symbol, faith is represented, and by not having a symbol, no faith is represented.

But Mr. Vines (like most people who use faulty logic like his) has only a narrow view of right and wrong, tolerance and acceptance—in his world, everything in Busch Stadium has to be void of religious symbols, even though there are Christians on the team and groundskeepers (who drew the cross on the mound) who have the right (by God and by the U.S. Constitution) to exhibit that belief, too.

Both groups (atheists and Christians) were offended. And if you read the comments on those stories (by people who also have a voice in our society), the majority (and it was overwhelming) of people were offended by Vines’ belief that there shouldn’t be any symbol.

Someone on the Riverfront Times website posted simply that atheists “believe their religion of nothing should be enforced on everyone.”

Someone else was more philosophical and direct (and more logical): “Has it ever occurred to you, Mr. Vines, that your desire to get rid of religious symbols offends me, and that, therefore, my offense and your offense cancel each other out and the symbols get to stay?”

That same person went on to list the places or cities in the U.S. like Sangre de Cristo (Blood of Christ) Sante Fe (Holy Faith), Corpus Christi (Body of Christ), Santa Cruz (Holy Cross), Las Cruces (the crosses), and even places like St. Paul, Minn., and, well, yes, St. Louis—where the Cardinals play—and asked, sarcastically, if we should rename them.

Vines also wrote: “Out of respect to a devoted and diverse fan base who also has some skin in the game, not to mention a diverse group of players, (St. Louis Cardinals) ownership has a responsibility and obligation to prohibit religious symbols of any kind from being placed in the field.”

Mr. Vines, no they don’t. Ownership has no obligation other than to do whatever they want. Ownership did use that right, but unfortunately they gave in to Vines repeated claims that he was offended (he wrote several letters complaining. I would have responded to him with letters asking him to stop and if he didn’t, I would let him know that I would be offended – which, would bring us to the crossroads, once again, of which offended person would we choose to give in to this time?).

But it’s not a matter of being offended (it happens every day). It’s a matter of giving in every time an atheist has a problem with displays of Christianity. We do have a freedom to express it, Mr. Vines.

And even though the Cardinals caved in this time, and offended others by trying not to offend one man, we’re hoping the next time someone in charge says this: “Thank you for your opinion. There are others who will be offended if we do that, so we, in exercising our right to do whatever we want, will do just that and not cave in to your illogical and overly sensitive demands. Because, well, they offend us.

That is the type of boldness and backbone we need today.

This column was published in the July 2013 Sports Spectrum DigiMag. Brett Honeycutt is the managing editor of Sports Spectrum magazine. His column addresses topics from a biblical perspective. Follow him on Twitter-@Brett_Honeycutt.