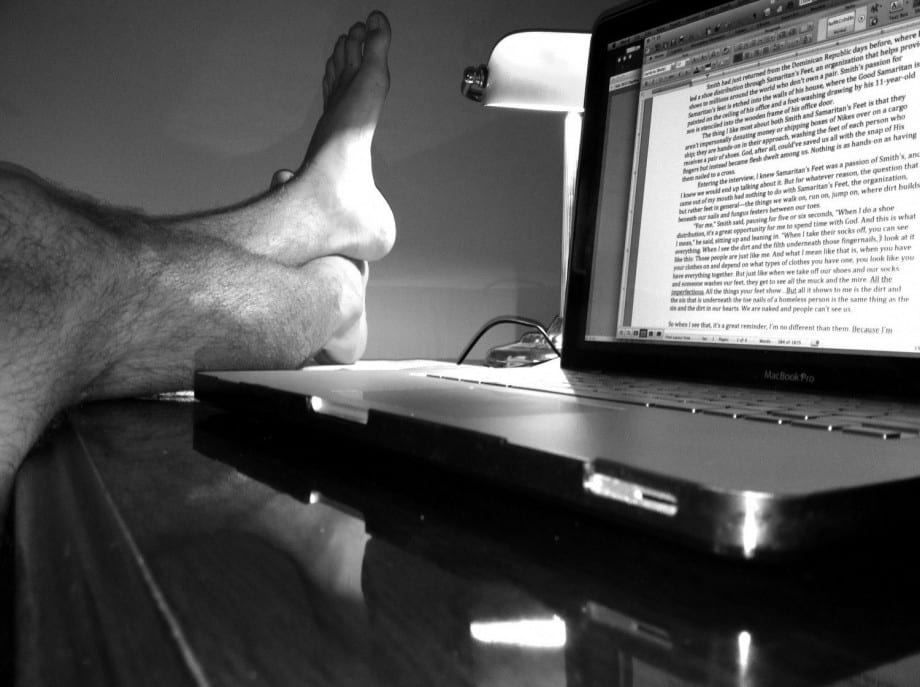 “I have a strange question,” I said.

Smith had just finished telling me about his visit to the Dominican Republic the week before, where he led a shoe distribution trip through Samaritan’s Feet, an organization that helps provide shoes to millions around the world who don’t have them. The unique thing about Samaritan’s Feet, I found, is that it takes a hands-on approach to their ministry, washing the feet of each person who receives a pair of shoes. Which led me to my question…

“What’s it like to wash the feet of a homeless man?” I asked.

But for whatever reason, the question that came out of my mouth had nothing to do with Samaritan’s Feet, the organization—but rather the feet we walk on, run on, jump on, where dirt builds beneath our nails and fungus festers between our toes (if you’re podophobic, sorry). And just as Smith wasn’t expecting the question, I wasn’t expecting his answer.

“For me,” Smith said, pausing for three or four seconds, “When I do a shoe distribution, it’s a great opportunity for me to spend time with God. And this is what I mean,” he said, sitting up and leaning in. “When I take their socks off, you can see everything. And when I see the dirt and the filth underneath those toenails, I look at it like this: Those people are just like me.

“When you have your clothes, you look like you have everything together. But just like when we take off our shoes and our socks and someone washes our feet, they get to see all the muck and the mire. All the imperfections. All the things your feet show.”

As I write this in my office just outside Charlotte, N.C., I have my bare feet propped on my desk. I see a total of eight scars and a gap big enough next to my big toes to rest a baseball bat. Stare at my feet long enough, and you’ll think I’m from another planet. Or perhaps reside in a pond.

That’s because my feet face inward too much, like a duck. It required two separate foot surgeries as a toddler. My mother would push me around the mall or grocery in a wheel chair, and people would come up and pet me like I was the runt of the litter. Cute, sure, but only because it’s pathetic.

As I got older, they continued to grow inward again. To this day, it looks like I could have six toes because of the gap next to my big toe. I look at my feet right now, crossed on my desk, hoping my editor doesn’t walk in, and I’m reminded that my heart is just as my feet: scarred and broken.

“But all it shows to me is the dirt and the sin that is underneath the toenails of a homeless person is the same thing as the sin and the dirt in our hearts,” Smith continued. “So when I see that, it’s a great reminder that I’m no different than them. Because I’m jacked up. Filthy. Toe-up. Deceiving. Untrustworthy, at times. No matter how many organizations I’m involved with, no matter how many showers I take, you can’t wash that away—only the blood of Jesus.”

The thing I love about what Smith said is that washing feet reminds him of one thing: his humble submission to the Father because of his own scars, dirt and fungus. While photographers snap photos and journalists write stories about Steve Smith’s involvement with Samaritan’s Feet, centered around his passion and generosity, his heart and mind are elsewhere—perhaps at the Last Supper, where Smith envisions Jesus washing Smith’s own battered feet that have journeyed places they shouldn’t, or perhaps in the shadow of the cross, where Jesus is dying to save a murky soul that has been trapped places it shouldn’t. Like all of us.

The other day, I found myself standing next to nine groomsmen on a porch in Louisville, Ky., for my best friend’s wedding. It was at a historical site, and there was once a Civil War battle there or something. It had rained for three days straight, but it stopped for two hours, and it felt like God was breathing life into everything around us.

At one point in the wedding there was a foot-washing ceremony for the bride and groom. The worship leader was playing “To The Very End” by Will Reagan on the acoustic. The bride was crying. Time seemed to move in slow motion, flawless like a living, breathing Nicholas Sparks film. Also, the flower girl was rolling around in the grass, and I found it unfair she got to roll around while I had to stand and focus on not locking my knees.

I noticed the groom’s shoes resting on the boards of the porch, and believed it to be a perfect snapshot of humility. Throughout their marriage, I knew they would mistreat one another. There would be scars, dirt and fungus. But their humility before God would allow them to wash one another’s feet for the rest of their lives. Time after time. To the very end.

I’m currently reading a book called “Humility” by Andrew Murray (an 1800’s South African theologian, not the 2013 Wimbledon champion). He says this: “And because Christ had thus humbled himself before God, and God was ever before Him, He found it possible to humble Himself before men too, and to be the Servant of all.”

So I picture myself in that room, a magnificent supper in progress, sitting in a chair, my Savior crouching down and removing my shoes, His hands holding my feet, His thumbs caressing my scars.

And telling me I should do the same.

This column appeared in the July 2013 DigiMag. Stephen Copeland is a staff writer and columnist at Sports Spectrum magazine. His column tackles sports and faith from another angle, whether it’s humorous, personal or controversial. Follow him on Twitter-@steve_copeland or email him at stephen.copeland@sportsspectrum.com.