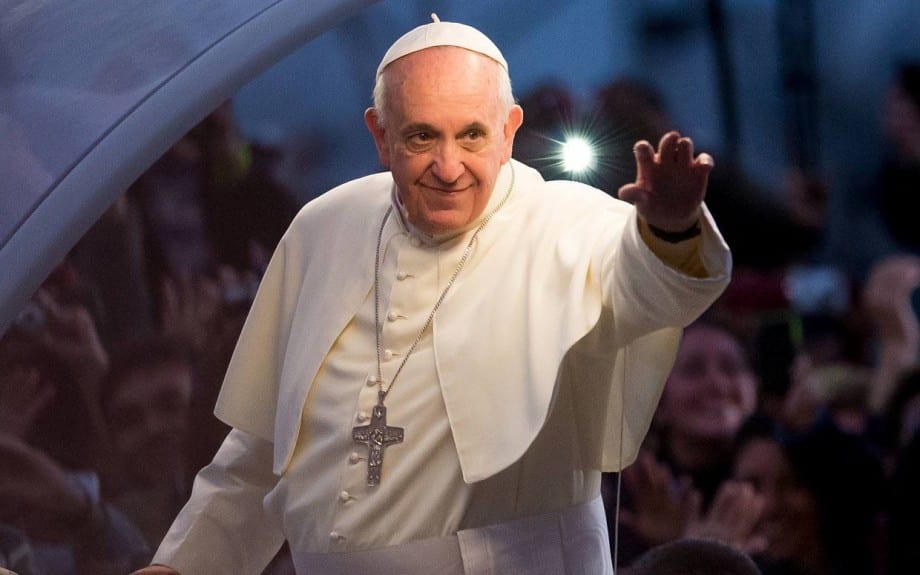 Carolina Panthers long-snapper JJ Jansen looked at me from across the table. He had an intense strain in his eyes. I noticed sweat forming on his nose. His leg started to shake, causing our coffees to rattle on the table as if there was a coming storm. I looked at him, confused.

“Stephen,” he said, “I have something to tell you.”

“I’m Catholic,” he replied, as I choked, coughed, and coffee sputtered out of my mouth. “I know, I know,” he said apologetically, casually wiping off his shirt like it was no big deal at all, “I should have told you sooner.”

I sighed. “Yeah, you should’ve,” I said firmly, turning to the side and zipping up my backpack. “I think we need some space between us.” And I walked away, praying for his salvation.

This didn’t happen, obviously. If it ever did happen, I’d deserve one of JJ’s long snaps to the groin…as I stood five feet away…not wearing any boxers.

I did find out Jansen was Catholic, which I didn’t know; and he found out I used to be Catholic, which he didn’t know. Though we typically meet to talk about faith over our coffee addictions, this discovery propelled our conversation into something I’ve wanted to write about for a while, but didn’t know exactly how.

When I decided to get baptized in a Protestant church, I’m sure it didn’t settle well with some of the people in my parish; but my parents, staunch Catholics, were supportive. They told me they wanted me to grow in my relationship with God, even if that meant walking away from Catholicism.

Their respect of my own decision-making as an adult would forever shape the way I approach Christianity and denominations.

As I’ve grown intellectually as a Protestant, I’ve begun to appreciate the beauty of Catholicism, the reverence of Catholic Mass, its emphasis on the Eucharist, a reminder that we are in perfect union with the Godhead, and some of their traditions. Do I agree with everything? No. And that’s okay.

Unfortunately, JJ says he’s been to many Protestant services where the congregation will recite the Nicene Creed, say “One holy, catholic and apostolic church,” and then the pastor will clarify that “catholic” (little c, means universal) is not the same as “Catholic” (big C). In doing so, the pastor assures everyone that his church doesn’t support Catholicism, thus denouncing Catholicism altogether, thus adding to the division.

I remember receiving an email one time from a subscriber when I was managing Sports Spectrum’s information account, complaining about our feature story on John Harbaugh in our Fall 2010 issue. The email, in a nutshell, said: “I don’t like that John Harbaugh was in your magazine. I’ve heard he’s Catholic and I’m not sure if he understands salvation.”

I wish people could see people as people, not in the blacks and whites of denominational differences or rights and wrongs. And I think that’s what I like most about the new pope, Jorge Mario Bergoglio, known as Pope Francis. He sees people as people. Not issues. Not denominations. He doesn’t seem to be hung up on categorizing, as the Pharisees wanted Jesus to do. He lives in the gray, mysterious area of grace and wants to help people take one more step towards Christ, whatever that is.

“A person once asked me, in a provocative manner, if I approved of homosexuality,” Francis said in an interview with La Civilta Cattolica in August. “I replied with another question: ‘Tell me: when God looks at a gay person, does he endorse the existence of this person with love, or reject and condemn this person?’ We must always consider the person.”

Pope Francis seems to be so in touch with grace, i.e. the heart of the gospel that leads us to repentance, that the humanness of a person is his most precious concern, which reminds me of Jesus.

Recently, I interviewed Luke Zeller, the oldest Zeller brother in the NBA who also runs a basketball ministry called “DistinXion.”

“DistinXion,” he told me, “is all about getting people to take one more step toward Jesus. For some, that step is just realizing that Jesus isn’t a statue. That’s okay. That’s not a problem. For other people, it’s getting baptized or getting saved, but it’s only one page of the story.”

See, we like salvation all packaged up. And for a time, I did that. There was a time I became more and more convinced Catholicism was corrupt and Luther was my savior. I believe there is a time to talk about doctrine. My father and I often times do while on my parents’ patio in Indiana.

But a formulaic God who only saves Protestants who are dunked in a baptismal pit or Catholics who attend regular confession with a priest seems to be a God that is far too small and explainable for me to worship and live my life for.

My sister is always raving about the Catholic church she attends in Indianapolis. And I dearly love the Protestant church I attend in Charlotte.

Isn’t God big enough to speak to each of us?

So whether you’re Catholic or Protestant, come swim in this grace that gives itself freely to you and me, and fall in love with the One who lavishes it upon us, who cannot be explained, who doesn’t have a cookie-cutter plan for experiencing Him, who welcomes everyone into His presence to know Him as He lives through us and loves us.

That’s really the issue, isn’t it? Catholic, do you know Him? Protestant, do you know Him? Maybe Catholicism works for you. And that’s great. Maybe a Sunday morning evangelical rock concert with a pastor in stylish jeans works for you. And that’s great, too. As my parents told me, as Luke Zeller tells the kids in his basketball camp, just take another step. Take another step and grow.

This column appeared in the October 2013 DigiMag. Stephen Copeland is a staff writer and columnist at Sports Spectrum magazine. His column tackles sports and faith from another angle, whether it’s humorous, personal or controversial. Follow him on Twitter-@steve_copeland or email him at stephen.copeland@sportsspectrum.com.