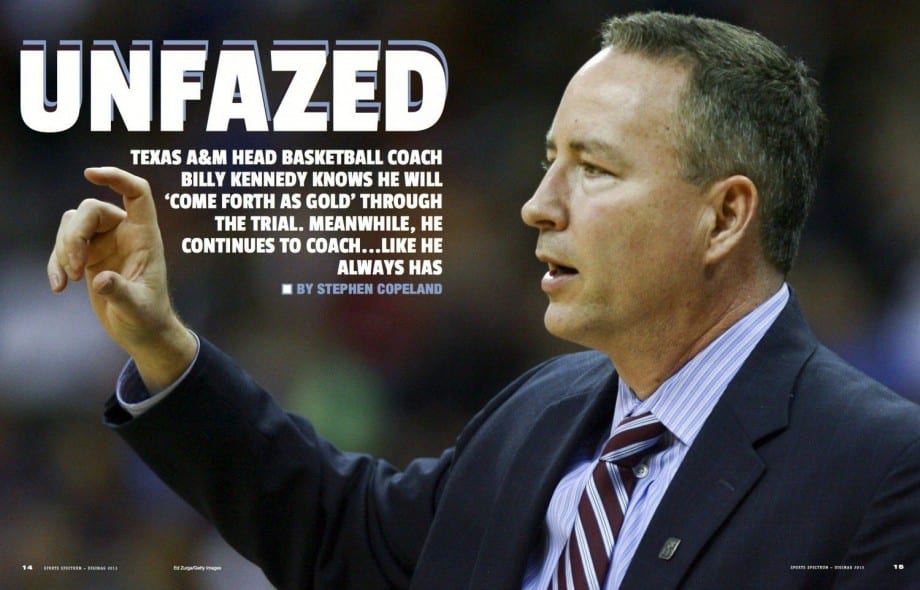 Kennedy sits in the middle of the room, its theatre-seating funneling toward the screen in front of them, tables running across each row, black-and-white A&M basketball photos and inspirational quotes plastered on the side walls. Kennedy’s plastic plate from lunch, littered with crumbs and a banana peel, is sitting on the table, as he casually leans back in his chair. It’s just past noon in College Station, Texas.

Cole sits up front, controlling the computer, as he pulls up different officiating videos sent from the NCAA, explaining the rule changes for the upcoming 2013-14 season. The season is indeed upon them, as they are scheduled to face Texas Christian University in a closed-to-the-public exhibition game that evening.

“We need to make sure we show that clip to our kids,” Kennedy makes a note, his voice soft and low.

The video ends and Cole exits the computer window. He opens another window—there are at least four of these video files the NCAA has sent to each coaching staff around the country.

The Kansas State against La Salle game appears on the screen, one of the biggest upsets in last year’s NCAA tournament. “Oh, I remember that,” Kennedy says, as a particular play unfolds on the screen.

He leans back and studies the rule change, decides whether or not he agrees with it, then thinks about how it will affect his team and the way his players play.

As he leaves the film room with his sports information director, it’s easy to see why Texas A&M was always Kennedy’s dream job. Not that this is why, but walking through A&M’s basketball facilities has the feel you have ventured places you shouldn’t, like an underground storage area for America’s nuclear weapons—punch codes that open double-glass doors, an elevator that takes you back to the athletic offices on the third floor of Reed Arena, and a giant glass wall in Kennedy’s office that overlooks A&M’s practice court.

His office is spacious, with couches and chairs and a conference table. His desk sits in the back right corner, a picture hanging above it; it’s of him and his youngest daughter, Anna Cate, cutting down the net when he won his first Ohio Valley Conference championship at Murray State University in 2010.

He sits down at the conference table. It’s cluttered with black, silicone wristbands. Each wristband has “Matt. 13:8” etched in bold, red lettering, with the other side reading “100x, 60x, 30x.” He hands them out to everyone he meets. 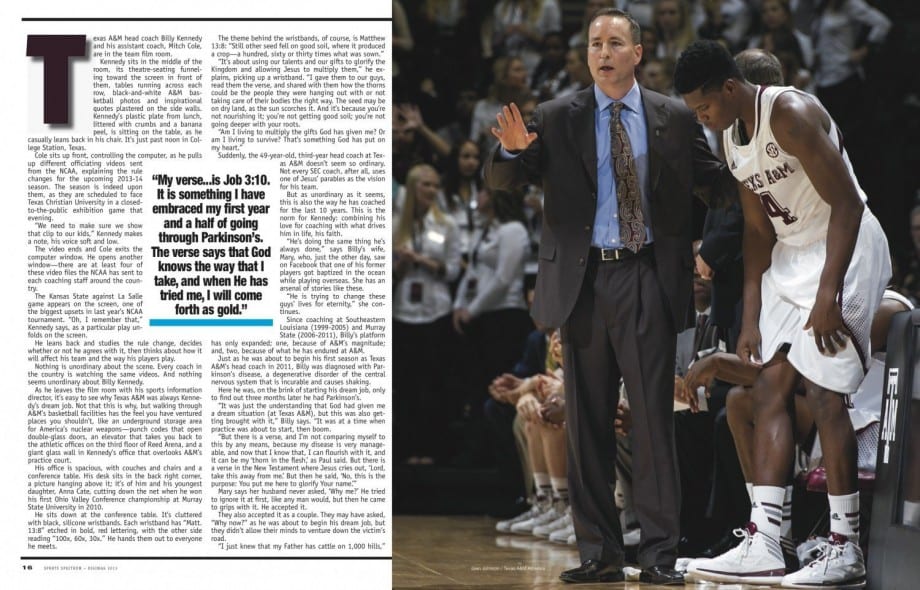 The theme behind the wristbands, of course, is Matthew 13:8: “Still other seed fell on good soil, where it produced a crop—a hundred, sixty or thirty times what was sown.”

“It’s about using our talents and our gifts to glorify the Kingdom and allowing Jesus to multiply them,” he explains, picking up a wristband. “I gave them to our guys, read them the verse, and shared with them how the thorns could be the people they were hanging out with or not taking care of their bodies the right way. The seed may be on dry land, as the sun scorches it. And it’s because you’re not nourishing it; you’re not getting good soil; you’re not going deeper with your roots.

“Am I living to multiply the gifts God has given me? Or am I living to survive? That’s something God has put on my heart.”

Suddenly, the 49-year-old, third-year head coach at Texas A&M doesn’t seem so ordinary. Not every SEC coach, after all, uses one of Jesus’ parables as the vision for his team.

But as unordinary as it seems, this is also the way he has coached for the last 10 years. This is the norm for Kennedy: combining his love for coaching with what drives him in life, his faith.

“He’s doing the same thing he’s always done,” says Billy’s wife, Mary, who, just the other day, saw on Facebook that one of his former players got baptized in the ocean while playing overseas. She has an arsenal of stories like these.

“He is trying to change these guys’ lives for eternity,” she continues.

Just as he was about to begin his first season as Texas A&M’s head coach in 2011, Billy was diagnosed with Parkinson’s disease, a degenerative disorder of the central nervous system that is incurable and causes shaking.

Here he was, on the brink of starting his dream job, only to find out three months later he had Parkinson’s.

“It was just the understanding that God had given me a dream situation (at Texas A&M), but this was also getting brought with it,” Billy says. “It was at a time when practice was about to start, then boom.

“But there is a verse, and I’m not comparing myself to this by any means, because my disease is very manageable, and now that I know that, I can flourish with it, and it can be my ‘thorn in the flesh,’ as Paul said. But there is a verse (John 12:27-28) in the New Testament where Jesus cries out, ‘Lord, take this away from me.’ But then he said, ‘No, this is the purpose: You put me here to glorify Your name.’” 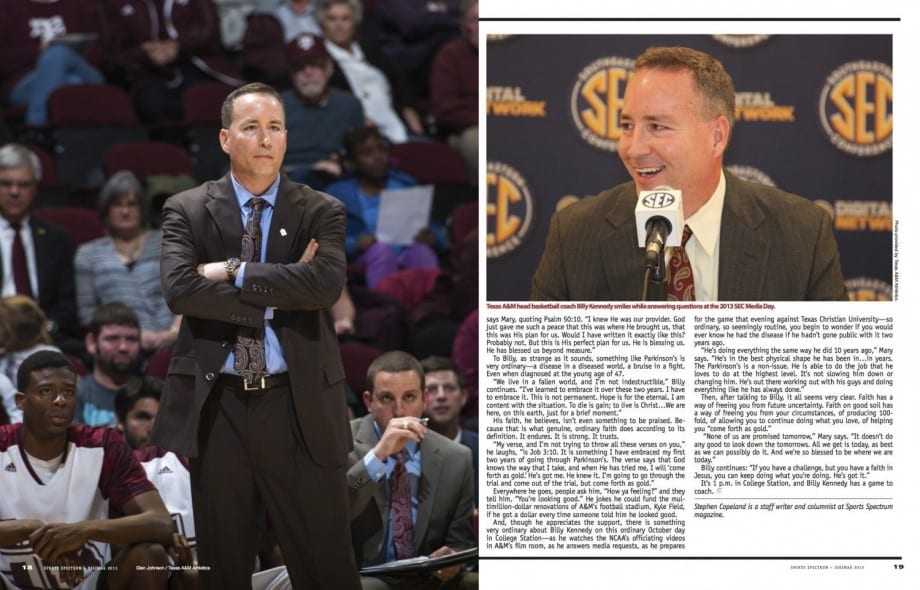 Mary says her husband never asked, ‘Why me?’ He tried to ignore it at first, like any man would, but then he came to grips with it. He accepted it.

They also accepted it as a couple. They may have asked, “Why now?” as he was about to begin his dream job, but they didn’t allow their minds to venture down the victim’s road.

“I just knew that my Father has cattle on 1,000 hills,” says Mary, quoting Psalm 50:10. “I knew He was our provider. God just gave me such a peace that this was where He brought us, that this was His plan for us. Would I have written it exactly like this? Probably not. But this is His perfect plan for us. He is blessing us. He has blessed us beyond measure.”

To Billy, as strange as it sounds, something like Parkinson’s is very ordinary—a disease in a diseased world, a bruise in a fight. Even when diagnosed at the young age of 47.

“We live in a fallen world, and I’m not indestructible,” Billy continues. “I’ve learned to embrace it over these two years. I have to embrace it. This is not permanent. Hope is for the eternal. I am content with the situation. To die is gain; to live is Christ…We are here, on this earth, just for a brief moment.”

His faith, he believes, isn’t even something to be praised. Because that is what genuine, ordinary faith does according to its definition. It endures. It is strong. It trusts.

“My verse, and I’m not trying to throw all these verses on you,” he laughs, “is Job 3:10. It is something I have embraced my first two years of going through Parkinson’s. The verse says that God knows the way that I take, and when He has tried me, I will ‘come forth as gold.’ He’s got me. He knew it. I’m going to go through the trial and come out of the trial, but come forth as gold.”

Everywhere he goes, people ask him, “How ya feeling?” and they tell him, “You’re looking good.” He jokes he could fund the multimillion-dollar renovations of A&M’s football stadium, Kyle Field, if he got a dollar every time someone told him he looked good.

And, though he appreciates the support, there is something very ordinary about Billy Kennedy on this ordinary October day in College Station—as he watches the NCAA’s officiating videos in A&M’s film room, as he answers media requests, as he prepares for the game that evening against Texas Christian University—so ordinary, so seemingly routine, you begin to wonder if you would ever know he had the disease if he hadn’t gone public with it two years ago.

“He’s doing everything the same way he did 10 years ago,” Mary says. “He’s in the best physical shape he has been in…in years. The Parkinson’s is a non-issue. He is able to do the job that he loves to do at the highest level. It’s not slowing him down or changing him. He’s out there working out with his guys and doing everything like he has always done.”

“None of us are promised tomorrow,” Mary says. “It doesn’t do any good to look down the tomorrows. All we get is today, as best as we can possibly do it. And we’re so blessed to be where we are today.”

Billy continues: “If you have a challenge, but you have a faith in Jesus, you can keep doing what you’re doing. He’s got it.”

It’s 1 p.m. in College Station, and Billy Kennedy has a game to coach.

Jrue Holiday helps lead Milwaukee Bucks to NBA championship: ‘This is only God’

SS PODCAST: Coach John Mosley on ‘Last Chance U’ and using coaching to share the Gospel