From the Archives -- Spirit of St. Louis 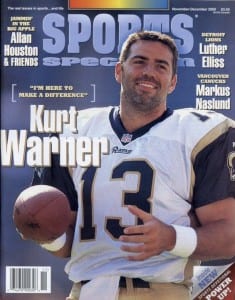 In one magical season that reads like an Oscar-winning movie script, Kurt Warner went from NFL quarterback wannabe–just two years ago he was a third-stringer who played in one game–to league and Super Bowl MVP.

“He’s a book, he’s a movie, this guy,” said St. Louis Rams former head coach Dick Vermeil after Warner led the Rams to their dramatic 23-16 victory in Super Bowl XXXIV by throwing for a record 414 yards.

Well, the book’s already out. It’s Warner’s autobiography, accurately titled All Things Possible. The movie? There’s nothing in the works–yet–but if you take Rudy, Rock, and Field of Dreams, and roll them all into one, you’ll get the idea what Kurt Warner: The Movie would be about.

Warner insisted after his record-shattering Super Bowl performance that “I don’t think of it as a Hollywood story. It’s just my life.”

Read the rest of our feature on Kurt Warner from our November/December 2000 issue by clicking here.

QB Trevor Lawrence, Marissa Mowry get married with Christ at the center