Devotional of the Week -- Do You Believe In Miracles? 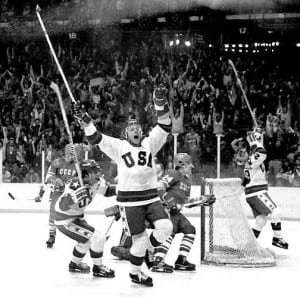 “Jesus said to him,‘If you can believe, all things are possible to him who believes.’ Immediately the father of the child cried out and said with tears, ‘Lord, I believe; help my unbelief!’” Mark 9:23-24

Al Michaels’ phrase, “Do you believe in miracles? Yes!” will be forever remembered as the most famous call in Olympic or sports history. He uttered those words at the end of one of the most shocking upsets in sports history, a 4-3 U.S. victory against the Soviet Union in men’s ice hockey at the 1980 Lake Placid Olympics.

It wasn’t the gold-medal game (that would come a game later against Finland), but it was stunning and unbelievable because the Soviets had routed the U.S., 10-3, in an exhibition less than two weeks prior to the upset.

The victory was so unbelievable that a N.Y. Times writer wrote that unless the ice melted that no team stood a chance to beat the Soviet Union, which had trounced a NHL All-Star team, 6-0, in an exhibition before the Olympics.

The U.S. team went in believing they could win, but belief wasn’t enough. They also had to take action.

Is there something that God wants to do in your life, but the only thing in the way is for you to believe? If you’re struggling with a lack of faith, ask God to help your unbelief as Mark 9 shows us. He is willing to help. All we have to do is ask.