Airing it Out -- The Whole Story

By Brett Honeycutt Aug 7, 2011
It was a great story and most of the major print media outlets like ESPN.com, the Associated Press, The New York Times, L.A. Times and Yahoo Sports picked it up and wrote about it. Los Angeles Dodgers pitcher Clayton Kershaw and his new bride, Ellen, went to Zambia on a goodwill trip to help orphans by building a schoolhouse and providing education for them... 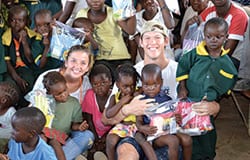 It was a great story and most of the major print media outlets like ESPN.com, the Associated Press, The New York Times, L.A. Times and Yahoo Sports picked it up and wrote about it. Los Angeles Dodgers pitcher Clayton Kershaw and his new bride, Ellen, went to Zambia on a goodwill trip to help orphans by building a schoolhouse and providing education for them.

That’s what they reported.

There was just one problem, though.

They censored the best part, the part that makes the Kershaw’s trip different than a trip by organizations like Red Cross, UNICEF or the Peace Corps.

Organizations like that do good, but sharing Christ with people to give them hope for eternity will last longer than health on this earth.

And that’s what the Kershaws believe.

Because they’re Christians (read more about Clayton’s journey with Christ, and also he and his wife’s trip to Africa in the Spring 2011 issue of Sports Spectrum).

The organization the Kershaws traveled with is Arise Africa, whose mission is to “address the needs of all people through prayer, partnering, and projects.” Their mission also “focuses on the quality of life” of people there “through home visits, teaching mothers about family planning, nutrition, hygiene, simple first aid and preaching the gospel of our Lord Jesus Christ.”

Prayer, the church, and our Lord Jesus Christ.

It’s too offensive for some, and not interesting enough for others.

Two of the stories mentioned Arise Africa, but none talked about the reason the organization exists – or the real reason the trip was taken in the first place.

We’re not afraid to talk about it, though.

Prayer, the church, and Christ are keys for us, too.

But for people who aren’t Christians, or who are in the secular media, those things don’t seem to matter.

Prayer, the encouragement of the church, and Christ are the reasons for the existence of Arise Africa, which was started by U.S. missionaries in 1998 and is now run by Ugandan nationals, pastor Godfrey Wanamista and his wife, Joy.

And prayer, the encouragement of believers and Christ are also why Sports Spectrum exists and why we’re different as a magazine.

I point these things out to make it even clearer to you why we’re different as a magazine compared to other sports magazines.

Our stories are unashamedly Christian.

We don’t censor the news.

And, we even tell of the mishaps of athletes.

Why? Because they want to share them and they know their stories can help others who have made mistakes.

We told you about the steroid use of just-retired New York Yankees star Andy Pettitte (Summer, 2009) and Baltimore Orioles star Brian Roberts (Fall, 2010). Both wanted to share their struggles and their reliance on Christ’s forgiveness and prayer during those trying times – because they knew it would encourage people struggling with sin in general.

The news media told you they used steroids, but when it came to Jesus and prayer and how much they relied on Him, those facts were put to the side or minimized.
We didn’t do that because we couldn’t. We know our faith is our lifeline. We know we need Christ. We know we’re nothing without Him. And we know we can’t exist without praying and talking to Him.

The Kershaws understand that, too, and know the real reason they went to Zambia. To build orphanages, to provide education – and to share Christ.

We’re not afraid to say it.

We want to tell the whole story.

And we just wanted you to know.

Brett Honeycutt is the managing editor of Sports Spectrum magazine. His column addresses topics from a biblical perspective. Follow him on Twitter-@Brett_Honeycutt.