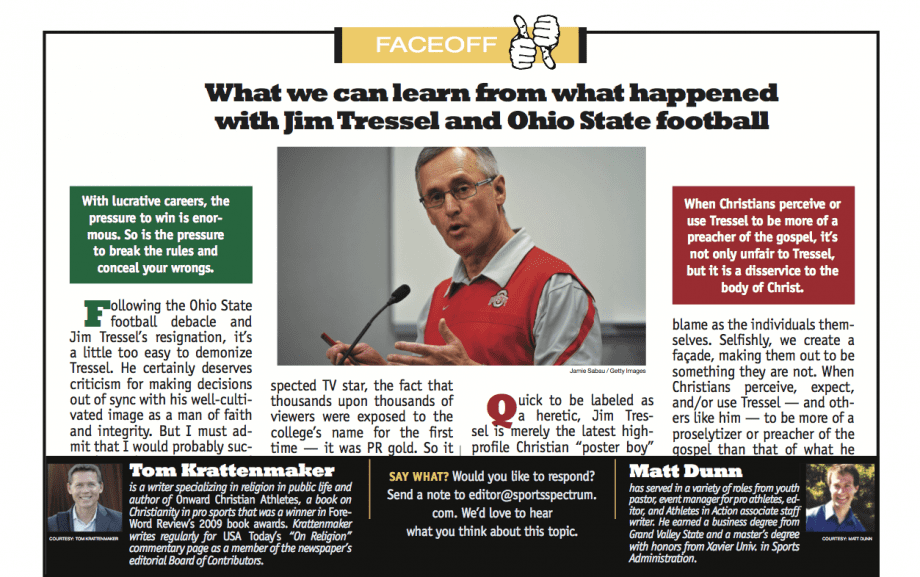 Following the Ohio State football debacle and Jim Tressel’s resignation, it’s a little too easy to demonize Tressel. He certainly deserves criticism for making decisions out of sync with his well-cultivated image as a man of faith and integrity. But I must admit that I would probably succumb to the same traps and temptations that got Tressel if I were the coach of a major college football program and subject to the same intense pressures, byzantine rules, and tantalizing rewards.

The real take-away is the poor condition of the platform of big-time sports, and the problems that can pose for sports ministry’s reliance on famous coaches and athletes as models and endorsers of faith. It’s not just that many of these people are bound to stumble. It’s that the environment in which they operate almost guarantees it, and the spotlight that shines on sports ensures that these failings will be seen by millions.

I completely understand why sports ministry arrived at the “celebrity endorsement” strategy. At one college where I worked, we were pleased and excited when Bill Cosby appeared on a television show wearing a sweatshirt with our college’s name on it. The visibility, the implied endorse- ment by a famous and respected TV star, the fact that thousands upon thousands of viewers were exposed to the college’s name for the first time—it was PR gold. So it must seem to spreaders of the Gospel when a widely admired coach or player uses his media access to share his faith and encourage others.

The problem is that big-time spectator sports have become a huge mess, often tainting those who are part of it. With lucrative careers and loads of money at stake, the pressure to win is enormous. So is the pressure to break the rules and conceal your wrongs. Combine that with the “gotcha” media environment today, and you have a recipe for embarrassing disaster. Does this really make for a good platform for sharing the Christian Gospel with the sports-loving masses?

We’ve reached the point where the sports platform needs to be repaired and redeemed if it’s going to promote the Christian faith. Ever since sports ministry sprang up, it has worked hard to encourage athletes to get their moral lives in order. Now is the time for sports ministry to strive to improve the moral life of sports themselves.

When Christians perceive or use Tressel to be more of a preacher of the gospel, it’s not only unfair to Tressel, but it is a disservice to the body of Christ.

Quick to be labeled as a heretic, Jim Tressel is merely the latest high- profile Christian “poster boy” to proverbially fall from his publicly perceived god-like status. Recognized as a Chris- tian example for many, he — like far too many before — has become the sacrilegious source for late night comedy, further juxtaposing Christian and hypocrite…leaving an ever widening chasm of skeptic criticism for an unbelieving society that seeks to immortalize mortal men.

Society evocatively focuses an unfair critical lens on those that openly embrace the Christian faith, seemingly leaving no room for the microscope of popular opinion or the inevitable fumbling and flaws of human frailty.

Some argue that devout Christian athletes bring about their own personal demise through the misuse of their platform. Openly speaking as advertisers of the gospel, they invite scrutiny as their faith-filled lives become the battle grounds and a media scapegoat when things go south. But I would argue that we, the adoring public, are as much to blame as the individuals themselves. Selfishly, we create a façade, making them out to be something they are not. When Christians perceive, expect, and/or use Tressel — and others like him—to be more of a proselytizer or preacher of the gospel than that of what he actually is, it’s not only unfair to Tressel, but it is a disservice to the body of Christ. It provides fuel for the Progressives to proverbially burn him at the stake, exemplifying him for all that’s wrong with Christians, further comingling Tressel’s message of character and val- ues with that of the gospel. Bottom line: we’re all guilty of being delusional, and hearing only what we want to hear.

But therein, amidst this mess, lies a great message and opportunity for grace. You see, God is a God of multiple second chances. He understands our frailty and half-hearted disposition, and loves us in spite of it all. Through genuine confession and personal surrender to Him as Lord, He can pick up the broken pieces and bring about something whole — transforming any heart and any situation — no matter how bleak it looks — making something good come from a seemingly ill moment.