From the Sports Spectrum Archives… 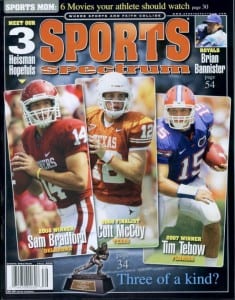 Warning to all Texas and Oklahoma football fans: Read no further.

Why are you still reading? Portions of this article will rock you to your Red River Rivalry cores. It will cause you to doubt everything you hold as truth. You’ll begin to wonder if the earth is indeed round and if “E” really does equal “MC-squared.”

Wait! Take a deep breath. Don’t do anything rash. This might help ease the pain a bit: Both quarterbacks are also friendly with fellow signal-caller Tim Tebow, whose Florida Gators chomped the Sooners in last season’s Bowl Championship Series title game.

“Sam, Tim and I have a lot in common,” McCoy says. “It was fun getting to know those guys at all of the award events last year, and we’ve stayed in touch. I don’t know if our fans would like it, but Sam and I have gotten really close. We talk pretty regularly.”

Probably not. Grab a fork and a knife, sports fans. If this season resembles last year’s feast of offensive marvels, Bradford, McCoy and Tebow are going to serve up a delectable smorgasbord of highlights, the likes of which college football rarely sees once, much less two years running.

The game’s signal-calling power trio all spurned the NFL last spring and returned to their schools, priming fans for a fall release of “Young Guns: The Sequel,” where NCAA records bite the dust like bad guys at high noon. What’s more, these three gunslingers – the top three preseason Heisman Trophy candidates – are all rock-solid Christians who share an unabashed love of the Savior.

When was the last time we saw that?

“The reason you can’t recall it is because it’s probably never happened,” says Kent Bradford, Sam’s father. “From everything I know about all of them, if I’m starting a team, I wouldn’t mind having any of them.”

All three players are model citizens who were raised in church and benefited from loving upbringings. Tebow became a Christian at age 6, while Bradford and McCoy did so as middle schoolers.

Thanks to his 2007 Heisman win and Florida’s two national championships during his watch, Tebow’s faith has received the most attention from the national media. If you haven’t heard about his family’s tireless missionary work in the Philippines – where Tim was born and spent many summers working in hospitals, prisons, orphanages and schools – you’ve probably been marooned on a remote island for the last three years.

“The Philippines are pretty special to me,” he says.

Tebow also shares the gospel in Florida prisons and even convinced Gators head coach Urban Meyer to take a mission trip to the Dominican Republic in 2008. On July 27, Tebow was the subject of Sports Illustrated’s cover story, in which writer Austin Murphy called Tebow “the most effective ambassador-warrior for his faith I’ve come across in 25 years at SI.”

Bradford and McCoy’s gospel-motivated efforts are impressive, too. Inspired by his paternal grandparents’ medical missions trips to Africa, McCoy has traveled twice into the jungles of Peru with an Fellowship of Christian Athletes group from Austin, Texas. As many of his peers lounged on carefree beaches, McCoy spent his last two spring breaks on the banks of the Amazon River, sharing the love of Christ and playing sports with dirt-poor village children, while also helping to build homes.

“It was a really neat trip and a lot of fun, but it was also hard work and really hot,” he says. “I enjoyed it, and anytime I have the opportunity to do it again, I will.”

On Fridays before home games, McCoy and a small group of teammates visit terminally ill children at the Dell Children’s Medical Center in Austin. He also speaks at local schools, churches and FCA events; visits nursing homes; tutors underprivileged children; and once volunteered as a phone operator for a Children’s Miracle Network telethon.

He was one of 11 players to be named to the 2008 Allstate American Football Coaches Association Good Works Team.

“He might be more proud of that award than any other he received last year,” says Brad McCoy, Colt’s father.

Bradford is the quietest of the three, but he still pays it forward. He is on the FCA leadership team at Oklahoma and has done charity work with the March of Dimes and Read Across America.

“He makes himself available to do whatever people want to do,” says Kent Bowles, the Sooners’ FCA area representative. “It’s crazy because he’s so busy. But he cares about people, and he cares about kids.”

On the field, Bradford (junior), McCoy (senior) and Tebow (senior) are three of the most accomplished quarterbacks in NCAA history. While Bradford and Tebow have a chance to join famed Ohio State running back Archie Griffin (1974-75) as the only two-time Heisman winners in history, McCoy, who lost to Bradford by a small margin in last year’s voting, wouldn’t mind getting in on the fun. But he downplays this desire.

“The most important thing is to prepare myself the best I can and to help my team win ballgames,” he says. “If we do that, they’ll be a lot of guys representing our team and receiving the recognition they’ve earned.”

In any other season but last year, McCoy likely would have won the Heisman. A consensus first-team All-American, he set the NCAA completion percentage record (76.7) while throwing for 3,859 yards and 34 touchdowns. He also led the Longhorns in rushing with 561 yards and 11 touchdowns. But Heisman voters crowned Bradford, who, as a sophomore, threw for a school-record 4,270 yards and 50 touchdowns, setting the NCAA record for most touchdowns thrown in his freshman/sophomore years (86).

It took all that to overshadow the sublime season of Tebow, one of the greatest dual-threat quarterbacks in NCAA history who passed for 2,746 yards and 30 touchdowns and rushed for another 673 yards and 12 scores. To cap it off, he led Florida to a 24-14 victory against Oklahoma in last year’s national championship.

“The one thing we really have in common is that we hate to lose and love to win,” McCoy says. “We’re all very competitive. Our No. 1 priority is to do whatever it takes to win football games. I think being great leaders and setting a good example for our team and our program is really important to us.”

Despite being nationally recognized athletes, each player seems to have a precociously mature knack for using the spotlight for something other than vanity.

“I know that what I’m here for is bigger than football,” says Tebow, who leads a team Bible study. “I’m here to spread God’s Word, and my position as a quarterback for Florida gives me the platform to do so.”

While Bradford and McCoy had met on the playing field the past few years, all three players and their families got to know each other better last December while in New York City for the Heisman ceremony. The Bradfords and McCoys ate dinner together the night before the nationally televised event.

“It’s nice to have guys that you like and respect that you can talk to that are going through a lot of the same things as you,” McCoy says. “It definitely was a blessing having the opportunity to get to know Sam and Tim.”

Now, the focus of each player is to lead his team to college football’s summit. To help him keep perspective in rollicking 80,000-seat stadiums, Bradford reads the story of David and Goliath before games. McCoy often turns to Colossians 3:23, which says, “Whatever you do, work at it with all your heart, as working for the Lord, not for men.” And Tebow – he of the Scripture-reference-adorned eye-black strips – recounts his summers spent in indigent Philippine villages, where the annual hubbub of the billion-dollar college football industry seems a bit trivial.

Ultimately, all three take heart in remembering who they are truly playing for.

“To have three good football players all being believers,” Bradford says, “I think it’s the Lord blessing us and allowing us to do what we’ve been able to do.”

Editor’s Note: Unfortunately, none of these three great quarterbacks were able to win the Hesiman trophy for the 2009 season, but all were drafted and now play in the NFL. Florida QB Tim Tebow was unable to repeat his 2007 trophy win, finishing third in the voting. Oklahoma QB Sam Bradford only played in 3 games that year, after being injured in the opening season loss to BYU and injured for the season in the Red River Rivalry game against Texas. Texas QB Colt McCoy finished third in the voting, as Alabama RB Mark Ingram took home the trophy. McCoy’s Longhorns would face Alabama in the BCS title game that year, only for McCoy to get injured early in the game. Unfortunately the injury was bad enough that McCoy could not throw a football and could not return. However, McCoy turned heads with what he said after the loss: “I’ve given college football the best I’ve had for the last four years,” McCoy said. “Every player’s dream is to play on a stage like that and have an opportunity like that. I could have never imagined this would happen. I’ll never question God. I’m a man of faith. I’ve never questioned why. But, yes, I’m truly disappointed because I would have made a huge difference.”

A comparative look at the career statistics of Sam Bradford, Colt McCoy and Tim Tebow: