In The News This Week: Webb Simpson 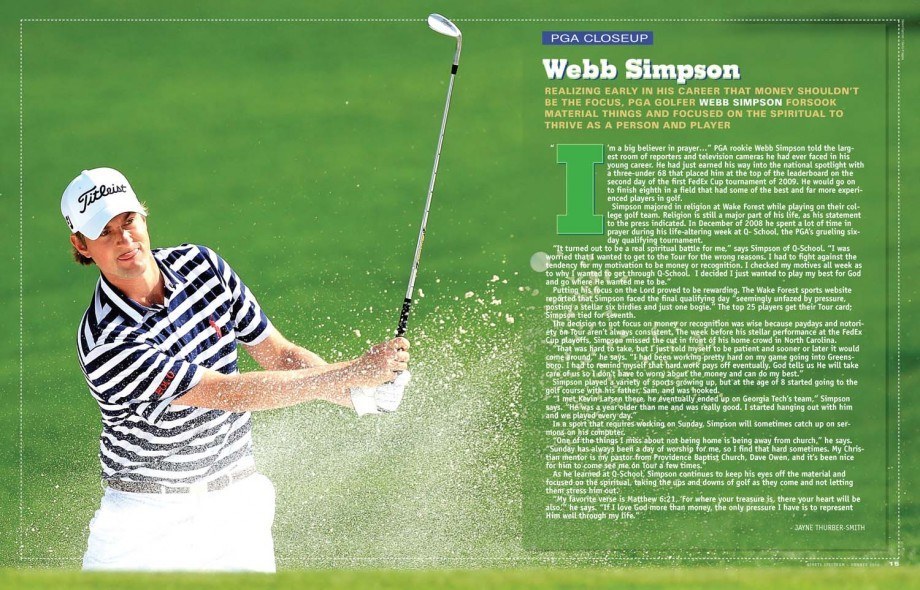 “I’m a big believer in prayer…” PGA rookie Webb Simpson told the largest room of reporters and television cameras he had ever faced in his young career. He had just earned his way into the national spotlight with a three-under 68 that placed him at the top of the leaderboard on the second day of the first FedEx Cup tournament of 2009. He would go on to finish eighth in a field that had some of the best and far more experienced players in golf.

Simpson majored in religion at Wake Forest while playing on their college golf team. Religion is still a major part of his life, as his statement to the press indicated. In December of 2008 he spent a lot of time in prayer during his life-altering week at Q- School, the PGA’s gruelling six-day qualifying tournament.

“It turned out to be a real spiritual battle for me,” says Simpson of Q-School. “I was worried that I wanted to get to the Tour for the wrong reasons. I had to fight against the tendency for my motivation to be money or recognition. I checked my motives all week as to why I wanted to get through Q-School.  I decided I just wanted to play my best for God and go where He wanted me to be.”

Putting his focus on the Lord proved to be rewarding. The Wake Forest sports website reported that Simpson faced the final qualifying day “seemingly unfazed by pressure, posting a stellar six birdies and just one bogie.” The top 25 players get their Tour card; Simpson tied for seventh.

The decision to not focus on money or recognition was wise because paydays and notoriety on Tour aren’t always consistent. The week before his stellar performance at the FedEx Cup playoffs, Simpson missed the cut in front of his home crowd in North Carolina.

“That was hard to take, but I just told myself to be patient and sooner or later it would come around,” he says. “I had been working pretty hard on my game going into Greensboro. I had to remind myself that hard work pays off eventually. God tells us He will take care of us so I don’t have to worry about the money and can do my best.”

Simpson played a variety of sports growing up, but at the age of 8 started going to the golf course with his father, Sam, and was hooked.

“I met Kevin Larsen there, he eventually ended up on Georgia Tech’s team,” Simpson says. “He was a year older than me and was really good. I started hanging out with him and we played every day.”

In a sport that requires working on Sunday, Simpson will sometimes catch up on sermons on his computer.

“One of the things I miss about not being home is being away from church,” he says. “Sunday has always been a day of worship for me so I find that hard sometimes. My Christian mentor is my pastor from Providence Baptist Church, Dave Owen, and it’s been nice for him to come see me on Tour a few times.”

As he learned at Q-School, Simpson continues to keep his eyes off the material and focused on the spiritual, taking the ups and downs of golf as they come and not letting them stress him out.

“My favorite verse is Matthew 6:21, ‘For where your treasure is, there your heart will be also,’” he says. “If I love God more than money, the only pressure I have is to represent Him well through my life.”

This story was published in the Summer 2010 issue of Sports Spectrum Magazine.