In the News: Jason Campbell 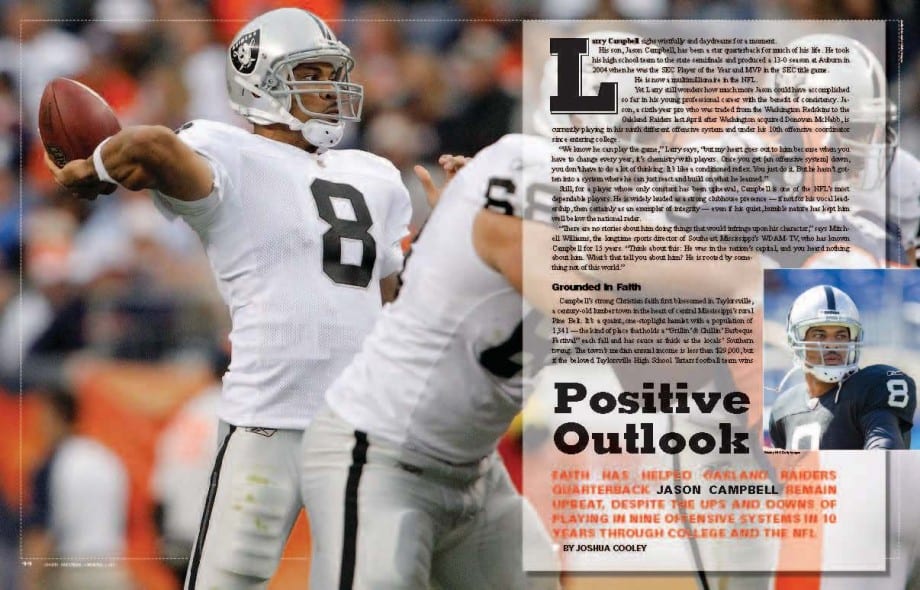 Larry Campbell sighs wistfully and daydreams for a moment.

His son, Jason Campbell, has been a star quarterback for much of his life. He took his high school team to the state semifinals and produced a 13-0 season at Auburn in 2004 when he was the SEC Player of the Year and MVP in the SEC title game.

He is now a multimillionaire in the NFL.

Yet Larry still wonders how much more Jason could have accomplished so far in his young professional career with the benefit of consistency. Jason, a sixth-year pro who was traded from the Washington Redskins to the Oakland Raiders last April after Washington acquired Donovan McNabb, is currently playing in his ninth different offensive system and under his 10th offensive coordinator since entering college.

“We know he can play the game,” Larry says, “but my heart goes out to him because when you have to change every year, it’s chemistry with players. Once you get [an offensive system] down, you don’t have to do a lot of thinking. It’s like a conditioned reflex. You just do it. But he hasn’t gotten into a system where he can just react and build on what he learned.”

Still, for a player whose only constant has been upheaval, Campbell is one of the NFL’s most dependable players. He is widely lauded as a strong clubhouse presence — if not for his vocal leadership, then certainly as an exemplar of integrity — even if his quiet, humble nature has kept him well below the national radar.

“There are no stories about him doing things that would infringe upon his character,” says Mitchell Williams, the longtime sports director of Southeast Mississippi’s WDAM-TV, who has known Campbell for 15 years. “Think about this: He was in the nation’s capital, and you heard nothing about him. What’s that tell you about him? He is rooted by something not of this world.”

Campbell’s strong Christian faith first blossomed in Taylorsville, a century-old lumber town in the heart of central Mississippi’s rural Pine Belt. It’s a quaint, one-stoplight hamlet with a population of 1,341 — the kind of place that holds a “Grillin’ & Chillin’ Barbeque Festival” each fall and the sauce is as thick as the locals’ Southern twang. The town’s median annual income is less than $29,000, but if the beloved Taylorsville High School Tartars football team wins on Friday night … well, shucks, life ain’t half-bad.

Jason placed his faith in Christ at age 13 during a large youth event in nearby Ellisville. He kept his nose squeaky-clean growing up, even calling his parents if he was in danger of breaking his curfew.

That position — NFL quarterback — is easily one of the most scrutinized in sports. And Campbell has certainly experienced his share of pressure since 2005, when Washington drafted the soft-spoken Auburn star in the first round, unofficially dubbing him the franchise savior as they attempted to recapture the glory days of the 1980s and early ’90s.

Campbell — 6-foot-5, 230 pounds and strong-armed — won Washington’s starting job entering the 2007 season and showed steady, if unspectacular, progression the next three seasons, improving his total passing yardage, touchdowns, completion percentage and passer rating each year. Last season, he threw for 3,618 yards and 20 touchdowns and had an 86.4 passer rating.

But Campbell only went 20-for-32 as a starter in Washington and never truly won over the team’s rabid fan base or front office. It certainly wasn’t all his fault. Last year, during the Redskins’ 4-12 debacle, he was sacked 43 times, third highest in the league, behind a depleted offensive line.

The season was a bizarre maelstrom of negativity. Several players openly defied head coach Jim Zorn, who was unceremoniously stripped of play-calling duties after week 6 and was fired the morning after a season-ending loss. Vice president of football operations Vinny Cerrato abruptly resigned after week 14.

“I felt like it was a test of how much faith I really have,” Campbell says.

More trials were to come. When the Redskins pulled off last April’s shocking intra-divisional trade for McNabb, Philadelphia’s six-time Pro Bowler, Campbell’s days in D.C. were effectively over. Three weeks later, he was shipped to Oakland for a fourth-round draft pick in 2012.

While Campbell, 29, welcomed the change of scenery, the Raiders aren’t exactly the NFL’s model franchise. Entering this season, Oakland hadn’t won more than five games since 2002, and head coach Tom Cable was on shaky ground last year after weathering physical abuse allegations from an assistant coach, his former wife and a former girlfriend.

In August, Al Davis, the Raiders’ notoriously outspoken owner, raised expectations for Campbell by comparing him to Jim Plunkett, the Super Bowl XV MVP who led the team to its last two championships in the 1980s. Out of the frying pan, into the oven.

“We can really turn things around,” he says. “A lot of people have been saying things about this team the last few years. But if we make negatives into positives, it will be worth it.” 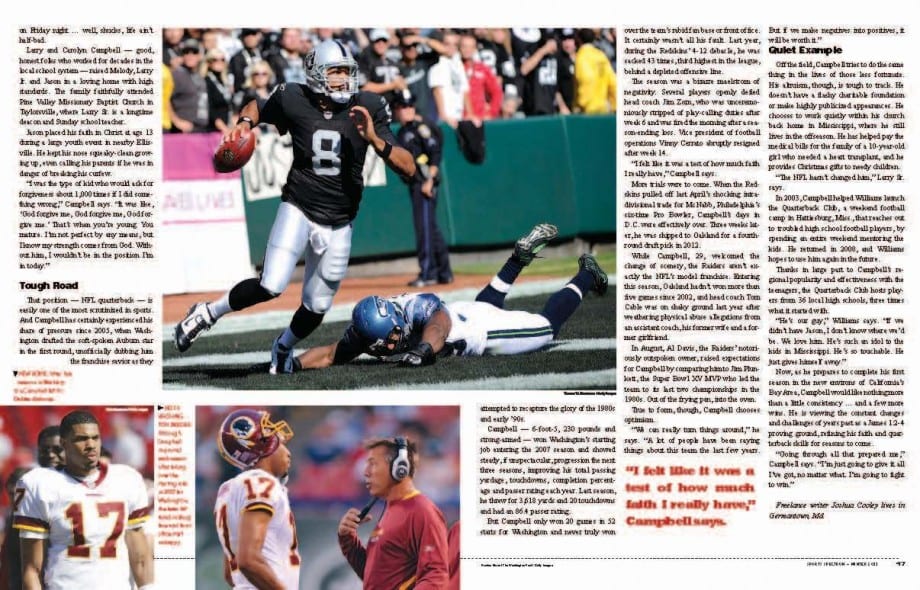 Off the field, Campbell tries to do the same thing in the lives of those less fortunate. His altruism, though, is tough to track. He doesn’t have a flashy charitable foundation or make highly publicized appearances. He chooses to work quietly within his church back home in Mississippi, where he still lives in the offseason. He has helped pay the medical bills for the family of a 10-year-old girl who needed a heart transplant, and he provides Christmas gifts to needy children.

In 2003, Campbell helped Williams launch the Quarterback Club, a weekend football camp in Hattiesburg, Miss., that reaches out to troubled high school football players, by spending an entire weekend mentoring the kids. He returned in 2008, and Williams hopes to use him again in the future.

Thanks in large part to Campbell’s regional popularity and effectiveness with the teenagers, the Quarterback Club hosts players from 36 local high schools, three times what it started with.

“He’s our guy,” Williams says. “If we didn’t have Jason, I don’t know where we’d be. We love him. He’s such an idol to the kids in Mississippi. He’s so touchable. He just gives himself away.”

Now, as he prepares to complete his first season in the new environs of California’s Bay Area, Campbell would like nothing more than a little consistency … and a few more wins. He is viewing the constant changes and challenges of years past as a James 1:2-4 proving ground, refining his faith and quarterback skills for seasons to come.

“Going through all that prepared me,” Campbell says. “I’m just going to give it all I’ve got, no matter what. I’m going to fight to win.”

This story was published in the Winter 2011 issue of Sports Spectrum Magazine.