In The News: Albert Pujols 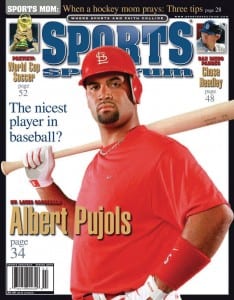 The invitation came in the mail one day, and 24-year-old Shawn Hoskin was all aflutter for weeks. He had been invited to the Pujols Family Foundation’s annual autumn prom, the jackpot of all invitations.

Every October the Pujols Family Foundation – the charitable organization established by St. Louis Cardinals first baseman Albert Pujols and his wife Deidre in 2005 – holds the prom for teenagers and young adults with Down syndrome. Albert and Deidre have a daughter, Isabella, with Down syndrome, and they wanted to use their resources to make a difference in the lives of others with the same condition – like Shawn.

In the days leading up to the event, Shawn got more and more excited. It was all he talked about to his parents. The day of the prom came, and Shawn got a shoe shine, a haircut and a bow tie. His father Ron chauffeured him to the prom in the family Cadillac, used only on special occasions. Then Shawn abandoned his dad in favor of the dance floor, but Ron didn’t mind a bit.

“This is heaven-sent,” Ron said.

Heaven-sent indeed. Lots of other people have been saying as much about Albert, hailing him as a heaven-sent hero since he broke in with St. Louis in 2001. Even journalists, who often have reason to be cynical, given their personal access to stars and celebrities, have begun to sing Pujols’ praises.

For example, sportswriter Jeff Passan wrote of Pujols, “As conditioned as we are to hear the word God out of an athlete’s mouth and immediately tune it out, knowing well the hypocritical piety perpetuated by so many, what if there really is something to Pujols’ devotion?”

Pujols himself embraces the call of being a hero in no-hero world, seeing his baseball talent as a platform to point people to his Savior Jesus Christ. “Baseball is simply my platform to elevate Jesus Christ, my Lord and Savior,” he said.

In this regard, Pujols echoes the Apostle Paul who said, “Be imitators of me, as I am of Christ.” (1 Corinthians 11:1)

Albert’s story is one of being a hero in his own home first, and then extending that influence outward through his foundation and his fans. Albert knows that his baseball skills and personal drive are heaven-sent, and he aims to use them for eternal purposes.

Heaven-sent. Lots of other families affected by Down syndrome would agree. Albert and Deidre began the foundation as the vehicle through which much of their ministry to others takes place. Since children with Down syndrome are dear to them, one of the foundation’s aims is to love and care for others, with the disease, and their families.

“There’s a light that goes on inside of Albert when he’s around these kids,” said Todd Perry, executive director of the Pujols Family Foundation. “There’s no other way to put that. He beams. He exudes love. I don’t see it at the ballpark. There are places where he’s certainly friendly and he’s accommodating, but there is a love that comes out in him when he’s around these kids.”

Because of the great amount of extra work and responsibility involved, the world often speaks of having children with Down syndrome in terms of a tragedy that should be avoided, but the Pujolses speak of them as a treasure to be embraced.

“We did not choose Down syndrome,” Albert and Deidre said. “Down syndrome chose us.” It’s a statement laced with gratitude for the joy brought into their life by Isabella, and by the countless numbers of children and adults with Down syndrome who freely give them so much affection at foundation events.

Such a perspective arises from the Pujols’ Christian faith, believing as they do, according to their foundation’s statement of faith, that God is “all-knowing and all-powerful,” and that “human beings are made in the image of God…no matter what their race, occupation, status, economic level or disability.”

Put simply, while the community of those affected by Down syndrome may think Albert and Deidre are heaven-sent, the Pujolses think the same about them.

Sometimes they deliver beds to those who have none. Sometimes they provide free eye exams and glasses for children at an orphanage. Sometimes they give free dental and other medical care. The country holds a special affection for Pujols, who spent the first 16 years of his life there.
Pujols is quick to say that his family wasn’t poor – but “poverty” can be a moving target, depending upon your frame of reference. For Pujols, the fact that he ate at least one meal a day meant he wasn’t poor. The “poor” people in the Dominican Republic to Pujols were those who went days or weeks without eating a meal and who drank grimy water from the river.

But his family certainly wasn’t rich, and financial struggles were common. Pujols often used limes as baseballs. For a glove, he’d use cardboard.
So Pujols knows what it’s like for a big chunk of the country’s 10 million residents who live in poverty. His heart goes out to them.

“When we’re in the Dominican, the positions that he and Dee Dee put themselves in – these kids have parasites, lice,” Perry said. “They have scabies and worse. And they love on these kids. They hug on them. It’s as if they were family. And you see that light come on again when he’s down there serving those people.”

From Prospect to Superstar

Heaven-sent. And of course, the St. Louis Cardinals and their fans would agree. When the Cardinals drafted Pujols in the 13th round of the 1999 amateur draft, they had no idea what they were getting. Pujols spent only one full year in the St. Louis farm system before hitting his way onto the team during spring training in 2001.

He went on to win National League Rookie of the Year honors that year, hitting .329 with 37 homers and 130 RBIs, and hasn’t slowed down since. In 2009, he reached the 350-home run mark faster than all but two other players in history, and he surpassed the record for most home runs in the first nine years of a career, established by Hall of Famer Ralph Kiner.

Pujols is the only player ever to begin a career with nine consecutive seasons of at least 30 home runs and 100 RBIs. He owns the Cardinals’ franchise record for most career grand slams, breaking the mark held by a guy known as “Stan the Man.”

He stands alongside Stan Musial, Ted Williams and Joe DiMaggio as one of only four players to have less than 500 career strikeouts and a career batting average over .330 at the time they hit their 300th home run.

Pujols owns three National League MVP awards (including 2009), has been an All-Star eight times and has led his team to the playoffs six times and to the World Series twice. He even has a Gold Glove on his resume, despite the predictions from many, early in his career, that he’d never win any awards for his defense.

In short, he’s the best player in the game today, and by the time he’s finished, may well be considered the best player ever. He’s gotten there not only because of natural, God-given talent, but also because he works his tail off to develop those skills he knows come from God. He sees that as his responsibility.

“He is an absolutely passionate and committed person,” said St. Louis Cardinals broadcaster and former Cardinals pitcher Rick Horton. “It’s one thing to be passionate about something and not do anything about it. But he has passion and then action to follow.”

That passion comes through both in his charitable endeavors and on the baseball field.

“Albert doesn’t do anything unless he does it 100 percent,” Adams said. “So when he plays baseball, he’s going to be the best he can be. And he takes that same thing to his faith. When he makes a decision that he’s going to be a Jesus follower, he means that.”

That means no backing up. No phoniness. Just 100 percent authenticity.
“He takes that same discipline that he has on the field, the same work ethic that causes him to train for eight hours a day, that’s the way he lives his life,” Adams said. He puts his family first. He puts God first. And he just means it.”

By Tim Ellsworth and Scott Lamb

This story was taken from Sports Spectrum’s Spring 2010 issue and the 25-year Silver Anniversary Book. Pujols was also recently featured in the Summer 2011 issue with Lance Berkman and Matt Holliday. To order the issue, call 704-821-2971, or email info@sportsspectrum.com.