In the News: NL Comeback Player of the Year Lance Berkman 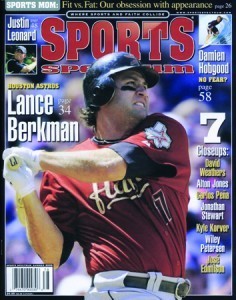 Deep in the Heart of Berkman

Lance Berkman has carved out a rather formidable reputation as an unstressed, underdressed Texan, an ultra-loose character, a chortling clubhouse comedian who isn’t afraid to take his act on the field.

There are at least three recorded incidents in which the Houston Astros’ five-time All-Star has impersonated a mascot—including the time when, rehabbing an injury in Triple-A while on the disabled list, he went into the opposing team’s clubhouse, jumped into the River Rat outfit and was seen dancing in his own team’s dugout. He also has frolicked with a mascot (the Phillie Phanatic)—trumping it up into a Wrestlemania spectacle by pretending to be floored by a forearm shiver—and taken batting practice while wearing a sumo-wrestler costume.

Then there was the time at Wrigley Field when the Bleacher Bums in left field were riding him about his physique, calling him “Fat Elvis” and some other unprintable names. One of them was shaking a pack of Twinkies, so Berkman motioned for the fan to toss it to him. Berkman retrieved the Twinkies, ate one and stuffed the other one in his back pocket, sending the Bums into hysterics.

“It’s like being with a clown,” teammate Roy Oswalt says.

Maybe so, but Berkman says there is something most people don’t know: While his loosey-goosey behavior is not an act, it masks a serious problem he has had with confidence for many years.

“With my type of personality, you have these mood swings,” he says. “I like to joke around and have a good time, but you can also get down. All my career and life, I think I’ve struggled with a kind of confidence problem, where you just don’t quite believe you’re good enough, or you’re always feeling like you have to prove yourself. I’ve always struggled with that, particularly when things are not going well on the field. I have a tendency to get down—and it’s not good. People see happy-go-lucky, but that’s not the whole story.”

In many ways, he has exceeded expectations. And yet he doesn’t feel he’s measuring up?

“Yeah,” he says with a laugh, “but then there’s the pressure to maintain it. If you do good, people expect you to continue to do good. It’s a good problem to have—that you’ve established a level of performance that people just expect out of you. But it’s difficult to maintain it. There’s always something. That’s the thing about baseball and life in general: There’s always something. You have to fight through it.”

Berkman says he has dealt with it more successfully as his faith in Jesus Christ has grown. He has replaced falsehoods with the truth: He isn’t Lance Berkman The Baseball Player. He’s Lance Berkman The Child Of God.

Colossians 2: 9-10: For in Christ all the fullness of the Deity lives in bodily form, and you have been given fullness in Christ, who is the head over every power and authority.

“You understand your identity is not ultimately what you are as a baseball player, but who you are in Christ,” he says. “That certainly helps, but it’s a battle, a fight. You have to remind yourself that’s the case. That’s the hardest thing for me and one of the things I don’t enjoy about the game, because it causes me to doubt and question and lose confidence, and that’s not a good feeling.

Berkman says nobody has had more of an impact on his faith in the past five years than Don Christensen, a board member for Baseball Chapel of America and Pro Athletes Outreach. He has accompanied Berkman to many speaking engagements and also co-taught with Berkman at the Astros’ weekly spring training Bible study meetings.

He compares Berkman to former pitcher Dave Dravecky, who lost his left arm to cancer and went on to become a motivational speaker and author.

“It’s incredible to watch Lance speak,” Christensen says. “The Lord has naturally gifted both of them. Lance uses a lot of illustrations to bring the message home. He helps people to see, ‘You need to get in the game. You need to live your life for Christ. It’s not about works, but works come as a result of faith.’ He challenges them to excel. I have spoken with Promise Keepers over the years and seen a lot of speakers. I’ll tell you this: He’s really gifted and has a great heart.”

Berkman’s heart is firmly rooted in mission projects all over the world. Christensen, a principal and senior financial advisor for Ronald Blue & Co., specializes in developing charitable-giving strategies for clients. He finds the projects and Berkman picks the ones he feels God calling him to adopt.

And there are a lot of them. He isn’t sitting on the wealth produced by a six-year, $85 million deal that takes him through the 2010 season. He’s distributing it through his foundation, the Lord’s Fund.

“We sit here in America, and a lot of times we don’t even know what’s going on in the rest of the world,” he says. “There’s a spiritual need in the rest of the world. I was blinded to that and didn’t really have any interest in that before I met Don. He opened my eyes to a whole new frontier or field that needs to be tended to.”

But the project that has most touched Berkman’s heart is the work being done by Peter Zaremba in Poland to offer the first translation of the Bible done by Polish Evangelicals from Greek and Hebrew texts. As a result of the work of Zaremba and his team, more than170,000 copies of the gospels (Matthew, Mark, Luke and John) are in circulation around the world. With the New Testament finished, Zaremba’s team is working on the Psalms.

“Lance and (wife) Cara financed the whole translation,” Christensen says. “Polish people all over the world are thrilled.”

Says Berkman of Zaremba, “He’s a remarkable guy, incredibly smart. That is really meaningful work. You get God’s Word out there and it’s going to change people’s lives. Just his excitement and humbleness and hunger and thirst for God is amazing to be around.”

In a way, these projects are preparing Berkman for the end of his career. He’s in a much different place than he was the last time Sports Spectrum profiled him (May-June 2002 cover story). His perspective has matured and sharpened as his faith has deepened.

There haven’t been any monumental, earth-shattering moments—just the growing recognition that there is more to life than trying to drive the ball over the locomotive and caboose that ride the railroad tracks above the left-field wall at Minute Maid Park.

“Now, I can kind of see the end of my career, and that’s sort of unsettling on one level,” he says. “You sit there and think, ‘Man, I’m 33 this year and probably have played more years in the big leagues than I have in front of me.’ You tell yourself, ‘There’s more to life than baseball,’ but when faced with that reality, it becomes more than a theory and it really hits home.

“As with the passage of time, God just deals with you in those ways. Your faith gets put to the test. It’s one thing to have faith in theory, but another when you’re confronted with these things or when you can see them, live them out or experience them. Early in my career, I was always, ‘You have to keep an eternal perspective,’ and, ‘Baseball isn’t always going to be around. It’s just a game and it’s just temporary.’ But now that you really realize it is temporary and it’s going to come to an end sometime in the foreseeable future, it makes you say, ‘Hey, that was true, and now what is life after baseball going to be like?’ You have to lean on your faith and God to direct you.”

Lance Berkman was featured on the cover of our Summer 2009 issue. The story was written before he was traded to the Yankees and the Cardinals. To order our Summer 2011 issue which also featured Berkman on the cover, call 704-821-2971.