In the News: Landry Jones 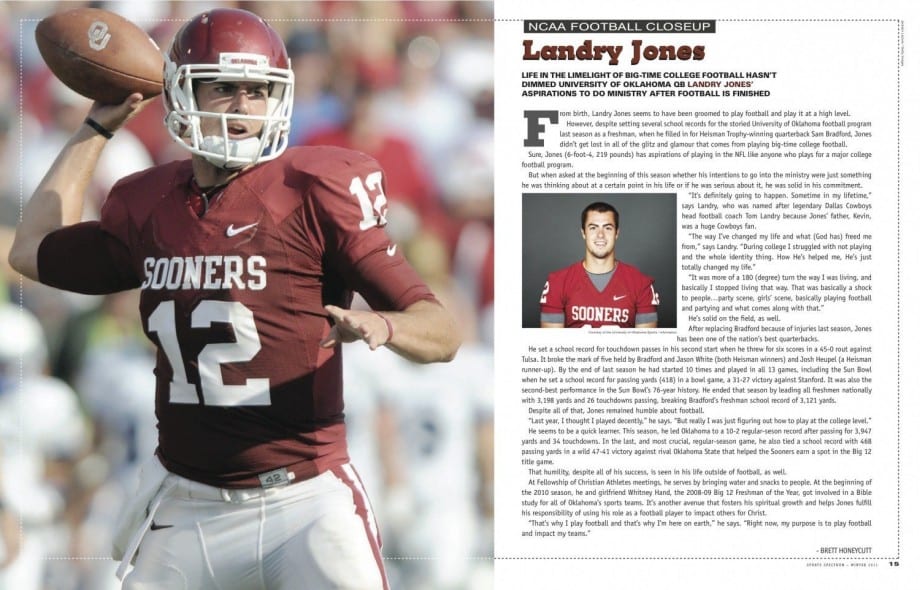 From birth, Landry Jones seems to have been groomed to play football and play it at a high level.

However, despite setting several school records for the storied University of Oklahoma football program last season as a freshman, when he filled in for Heisman Trophy-winning quarterback Sam Bradford, Jones didn’t get lost in all of the glitz and glamour that comes from playing big-time college football.

Sure, Jones (6-foot-4, 219 pounds) has aspirations of playing in the NFL like anyone who plays for a major college football program.

But when asked at the beginning of this season whether his intentions to go into the ministry were just something he was thinking about at a certain point in his life or if he was serious about it, he was solid in his commitment.

“The way I’ve changed my life and what (God has) freed me from,” says Landry. “During college I struggled with not playing and the whole identity thing. How He’s helped me, He’s just totally changed my life.”

“It was more of a 180 (degree) turn the way I was living, and basically I stopped living that way. That was basically a shock to people…party scene, girls’ scene, basically playing football and partying and what comes along with that.”

He’s solid on the field, as well.

After replacing Bradford because of injuries last season, Jones has been one of the nation’s best quarterbacks.

He set a school record for touchdown passes in his second start when he threw for six scores in a 45-0 rout against Tulsa. It broke the mark of five held by Bradford and Jason White (both Heisman winners) and Josh Heupel (a Heisman runner-up). By the end of last season he had started 10 times and played in all 13 games, including the Sun Bowl when he set a school record for passing yards (418) in a bowl game, a 31-27 victory against Stanford. It was also the second-best performance in the Sun Bowl’s 76-year history. He ended that season by leading all freshmen nationally with 3,198 yards and 26 touchdowns passing, breaking Bradford’s freshman school record of 3,121 yards.

Despite all of that, Jones remained humble about football.

“Last year, I thought I played decently,” he says. “But really I was just figuring out how to play at the college level.”

He seems to be a quick learner. This season, he led Oklahoma to a 10-2 regular-seson record after passing for 3,947 yards and 34 touchdowns. In the last, and most crucial, regular-season game, he also tied a school record with 468 passing yards in a wild 47-41 victory against rival Oklahoma State that helped the Sooners earn a spot in the Big 12 title game.

That humility, despite all of his success, is seen in his life outside of football, as well.
At Fellowship of Christian Athletes meetings, he serves by bringing water and snacks to people. At the beginning of the 2010 season, he and girlfriend Whitney Hand, the 2008-09 Big 12 Freshman of the Year, got involved in a Bible study for all of Oklahoma’s sports teams. It’s another avenue that fosters his spiritual growth and helps Jones fulfill his responsibility of using his role as a football player to impact others for Christ.