In the News: Jesse Williams 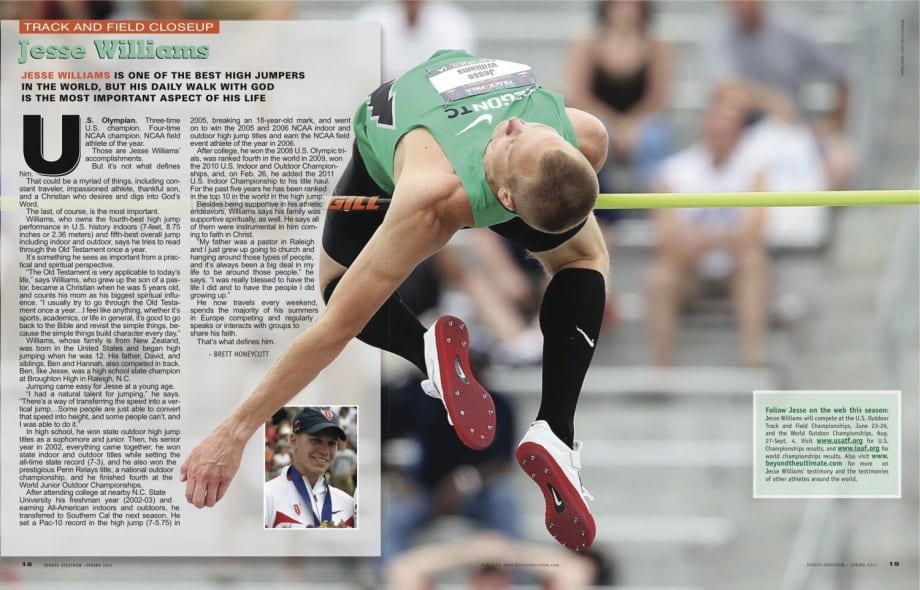 High jumper Jesse Williams was honored on Tuesday as a recipient of the Jesse Owens Award. This season, Williams became the first American to win a world high jump crown since Charles Austin in 1991. Managing editor Brett Honeycutt’s story on Williams was featured in the Spring 2011 issue of Sports Spectrum.

Those are Jesse Williams’ accomplishments.

But it’s not what defines him.

That could be a myriad of things, including constant traveler, impassioned athlete, thankful son, and a Christian who desires and digs into God’s Word.

The last, of course, is the most important.

Williams, who owns the fourth-best high jump performance in U.S. history indoors (7-feet, 8.75 inches or 2.36 meters) and fifth-best overall jump including indoor and outdoor, says he tries to read through the Old Testament once a year.

It’s something he sees as important from a practical and spiritual perspective.

“The Old Testament is very applicable to today’s life,” says Williams, who grew up the son of a pastor, became a Christian when he was 5 years old, and counts his mom as his biggest spiritual influence. “I usually try to go through the Old Testament once a year…I feel like anything, whether it’s sports, academics, or life in general, it’s good to go back to the Bible and revisit the simple things, because the simple things build character every day.”

Williams, whose family is from New Zealand, was born in the United States and began high jumping when he was 12. His father, David, and siblings, Ben and Hannah, also competed in track. Ben, like Jesse, was a high school state champion at Broughton High in Raleigh, N.C.
Jumping came easy for Jesse at a young age.

“I had a natural talent for jumping,” he says. “There’s a way of transferring the speed into a vertical jump…Some people are just able to convert that speed into height, and some people can’t, and I was able to do it.”

In high school, he won state outdoor high jump titles as a sophomore and junior. Then, his senior year in 2002, everything came together; he won state indoor and outdoor titles while setting the all-time state record (7-3), and he also won the prestigious Penn Relays title, a national outdoor championship, and he finished fourth at the World Junior Outdoor Championships.

After attending college at nearby N.C. State University his freshman year (2002-03) and earning All-American indoors and outdoors, he transferred to Southern Cal the next season. He set a Pac-10 record in the high jump (7-5.75) in 2005, breaking an 18-year-old mark, and went on to win the 2005 and 2006 NCAA indoor and outdoor high jump titles and earn the NCAA field event athlete of the year in 2006.

Besides being supportive in his athletic endeavors, Williams says his family was supportive spiritually, as well. He says all of them were instrumental in him coming to faith in Christ.

“My father was a pastor in Raleigh and I just grew up going to church and hanging around those types of people, and it’s always been a big deal in my life to be around those people,” he says. “I was really blessed to have the life I did and to have the people I did growing up.”

He now travels every weekend, spends the majority of his summers in Europe competing and regularly speaks or interacts with groups to share his faith.

That’s what defines him.