In the News - Clayton Kershaw 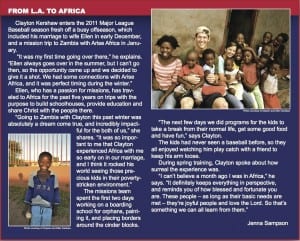 “The only thing I will say is I’m really humbled to be here,” Kershaw said, after leading his comments by saying that he didn’t have a lot to say. “I always dreamed about playing baseball as a kid, maybe one day making it to the big leagues, but I never dreamed about anything like this, so it’s really special.”

In the spring 2011 issue of Sports Spectrum, we featured Kershaw and he and his wife, Ellen talked about their mission trip to Africa over the offseason.

FROM L.A. TO AFRICA

Clayton Kershaw enters the 2011 Major League Baseball season fresh off a busy offseason, which included his marriage to wife Ellen in early December, and a mission trip to Zambia with Arise Africa in January.

“Ellen always goes over in the summer, but I can’t go then, so the opportunity came up and we decided to give it a shot. We had some connections with Arise Africa, and it was perfect timing during the winter.”

Ellen, who has a passion for missions, has traveled to Africa for the past five years on trips with the purpose to build schoolhouses, provide education and share Christ with the people there.

“Going to Zambia with Clayton this past winter was absolutely a dream come true, and incredibly impactful for the both of us,” she share. “It was so important to me that Clayton experienced Africa with me so early on in our marriage, and I think it rocked his world seeing those precious kids in their poverty-stricken environment.”

The missions team spent the first two days working on a boarding school for orphans, painting it, and placing borders around the cinder blocks.

“The next few days we did programs for the kids to take a break from their normal life, get some good food and have fun,” says Clayton.

The kids had never seen a baseball before, so they all enjoyed watching him play catch with a friend to keep his arm loose.

During spring training, Clayton spoke about how surreal the experience was.

“I can’t believe a month ago I was in Africa,” he says. It definitely keeps everything in perspective, and reminds you of how blessed and fortunate you are. These people – as long as their basic needs are met – they’re joyful people and love the Lord. So that’s something we can all learn from them.”