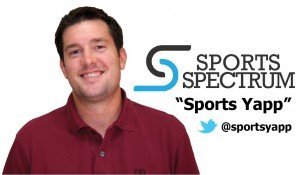 Arian Foster. He will put the team on his back by running well and catching plenty of passes out of the backfield. He led the league in yards from scrimmage with an average of 140 yards per game.

Bengals wide receiver A.J. Green will catch a touchdown and be very involved in the offense as always for Cincinnati. He is going to be an elite player moving forward, and he should have a nice playoff debut.

Despite believing Green will catch some passes for the Bengals, I think the Texans defense will force turnovers and keep rookie quarterback Andy Dalton in check.

Sean Payton is the only coach with a Super Bowl win out of these four teams, and I think he will have a nice gameplan to keep the Saints rolling this week.

Lions wide receiver Titus Young will be an impact player because their game against the Saints should be very high scoring if the last couple of weeks are any indication.  The Saints will put more attention on defense to Calvin Johnson, and that will allow Young to get open.

Houston over Cincy because of the Texans’ defense.

New Orleans over Detroit because of the Saints’ experience.

Falcons quarterback Matt Ryan will throw the ball all over the field. He finished the season strong, and I think that momentum will continue into the playoffs. It took awhile for the Falcons’ offense to click, but now they are a dangerous team that should be taken very seriously.

Falcons wide receiver Julio Jones has emerged since getting healthy. He is a major threat down the field, and it’s very clear why the Falcons traded so much to move up and draft him. He will have a big day on Sunday.

Pittsburgh head coach Mike Tomlin brings such a great combination of intensity, calmness and confidence to the sideline. He seems like a great leader, and he still gives some of my favorite press conference quotes.

Denver will do a great job of putting pressure on Ben Roethlisberger and force him to move around, which will be difficult because of his ankle sprain. I expect the Broncos to force multiple turnovers, and that will allow Tebow to get more opportunities to score.

Denver quarterback Tim Tebow has struggled the last three weeks, but I think he will take his game to a whole new level on Sunday. Many people have hopped off his bandwagon and written him off, but not me. I think if he plays looser and is willing to take some chances down the field, he will be fine. John Elway has suggested that Tebow should “pull the trigger,” and I think he’s exactly right. Tebow is too hesitant in the passing game and not aggressive enough. I would also say that Tebow needs to pull the trigger when it comes to running as well. He is at his best when a play breaks down quickly, and he recognizes that he needs to move fast and run.

Atlanta wins on the road against the New York Giants because their offense will play a little bit better down the stretch.

Denver upsets Pittsburgh because the Broncos are dealing with fewer injuries, and they are playing with less pressure to win.