SS At the Super Bowl: Blog Entry No. 4 (Media Day) 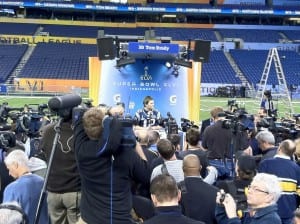 One of the coolest things on Media Day, at least for me, was having the opportunity to interview other members of the media. We talked to EPSN’s Rick Reilly, Fox Sports’ Dan Patrick, Sports Illustrated’s Peter King, NBC’s Tony Dungy (yes, he’s media now), and at the media party last night at the Indianapolis Motor Speedway, I had the opportunity to sit down with one of my favorite journalists, Indianapolis Star columnist Bob Kravitz.

Sure, not all of them were Christians. I’m not sure if any of them were outside of Tony. But my colleague from All Pro Dad and I enjoyed asking them about something that related to faith. For example, we asked both Dan Patrick and Peter King what kind of impact Coach Dungy had on the studio. Dan joked that he tries to watch his language around Tony—then got serious and said that he can actually truly act like himself. Peter admired Dungy’s selflessness in servant hood, then went on to open up about his relationship with his father. Subscribe to SS here for an upcoming story in our print issue about Tony’s impact and broadcasting and direction of his career.

The interview I think I enjoyed the most was Rick Reilly. My colleague asked Rick a number of questions regarding his column about Tim Tebow, and what Rick said struck me. He said that he didn’t care what religion Tim was. What stood out to Rick was Tim’s genuine love for people. To Rick, it wasn’t Tim’s faith that stood out to him. It was his love. That was a good reminder, though from a non-Christian (I think), that this world should know we are Christians by our love…just like Tim. I didn’t agree with everything Rick said regarding faith but definitely found his outlook very insightful. View the video below, and discuss in the comment section.

One thing I was a little nervous about was finding some Patriots players to interview about their faith. We had a list of believers that played for the Giants. But because we weren’t notified about our media credentials until late in the week, we didn’t have time to contact the New England chaplain. Strangely, however, literally right when we walked into Lucas Oil Stadium, I heard the words “Christian” and “Jesus Christ” coming from the podium of Patriots wide receiver Matthew Slater. Funny how that works. He gave us a solid interview about his testimony as did linebacker Jerod Mayo. My colleague made New England owner Bob Kraft tear up talking about his relationship with Jeff Saturday. (To get Bob’s attention, he held up the Winter 2012 issue of Sports Spectrum until his eyes locked onto the cover). Other guys we talked to (not necessarily about their faith) were Nate Solder, Kevin Faulk, and Brian Waters.

The Giants oddly reminded me of the 2006-07 Colts, who were featured in one of our most recent projects The Jersey Effect, because of the team’s concentration of believers. The best interview we got, in my opinion, was Tony Ugoh. He talked in-depth about his struggles this past year and how God had graciously provided for him and brought him to this place, the Super Bowl. We also talked to defensive end Justin Tuck, corner back Will Blackmon and some guys on the practice squad like Selvish Capers and Isiah Stanback. Blackmon told us that much of the defense met for Bible study, and Stanback said that he and his girlfriend have been working through 1 Peter together and learning a lot from the Word. My bold colleague also vocally outmuscled the dozens of media surrounding Eli Manning’s stage and asked Eli how it felt to be an uncle.

Not making any promises, but it’s looking like we should be able to do a feature story about the Giants and the possible revival that has taken place. A close-up or feature about Tony Ugoh also seems plausible. Subscribe to SS if you want to read those stories in an upcoming print or digital issue.

Considering this was my first Media Day and I’m rather inexperienced, there were a number of funny things that happened. Hoping to put together a more creative blog today, but I’m gonna be busy participating in Radio Row, plus the Internet at the JW Marriott is shoddy, so I can’t promise anything…

WATCH: L.A. Rams players share about their faith in Christ ahead of Super Bowl

WATCH: Bengals players & coaches share about faith in Christ ahead of Super Bowl