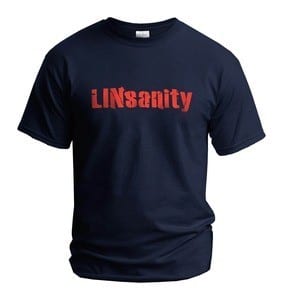 Jeremy Lin has become the talk of the sports world the past week–coming from his brother’s couch to the starting point guard of the New York Knicks. Since gaining significant playing time and the starting point guard position, Lin and the Knicks have won five games in a row, with Lin scoring 20 or more points in every game. He even out-dueled Kobe Bryant last week, scoring 38 points and dishing out seven assists in the Knicks 92-85 win against the Los Angeles Lakers on Feb. 10. And now there is a website (linsanity.com) selling Lin related t-shirts.

One of the coolest things about Lin’s story has been about his faith in Christ. Lin said to reporters after the Utah Jazz game that, “God works in mysterious and miraculous ways.”

Last week, Josh Hamilton had a relapse with alcohol. Instead of condemning / judging / abandoning Josh Hamilton, Dr. Jim Denison, a pastor/author in Texas, urges that we should pray for him. Addictions are tough to get over, and while Hamilton is very much a Christian, he is very much still a sinner. Former Red Sox ace and fellow believer Curt Schilling said that Hamilton’s relapse shouldn’t shock anyone, “…the last perfect person to walk this planet was 2,000 years ago.”

Hamilton immediately faced the press the next day and owned up to his mistakes. Watch the press conference is below:

Lin and the Knicks steal one at Minnesota

KU walk-on Christian Garrett talks about his faith in Christ