Around the Net - Bubba wins the Masters, Tim Tebow speaks at Easter service, Pena back with Rays 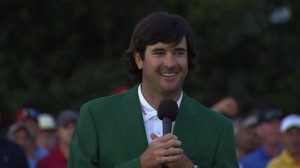 Bubba Watson won the 2012 Masters, clinching the tournament win after a two-hole playoff against Louis Oosthuizen. Watson, who was featured in the Winter 2012 issue of Sports Spectrum, finished at 10-under and won his first major tournament.

When asked about how special it was to win on Easter, Bubba said:

“Yeah, this is the day Jesus is risen. Good Friday was when He was crucified on the cross, and today is Easter where we celebrate He’s risen. For us, that’s salvation to go to Heaven.  He took all of our sins from us.” (Golf Channel)

Fifteen thousand people showed up for an Easter service in Georgetown, Texas with Tim Tebow as the guest speaker. Celebration Church hosted the service, and their pastor, Joe Champion, and Tebow talked for about 20 minutes.

“It’s OK to be outspoken about your faith,” Tebow said.

And when asked about when athletes say they are not role models, “Yes you are. You’re just not a good one,” Tebow said. (cbsnews.com)

Carlos Pena made a big return to the Tampa Bay Rays this weekend. After spending last season with the Cubs, Pena signed in the offseason with Tampa Bay and returns to the team he has spent the most successful years of his MLB career with. On Opening Day, Pena hit a Grand Slam a game-winning walk-off single. On Sunday, Pena hit his second homer of the season and brought his series total to 7 RBIs against the New York Yankees.

Pena was featured in the Sports Spectrum Summer 2009 issue and said this about his relationship with Christ, “I’m in constant prayer,” Pena says. I’m talking about an ongoing relationship and an ongoing conversation throughout the day.”

Masters winner Watson not ashamed of his Christian faith (BillyGraham.org)

C.J. McCollum: Why I’m returning to Lehigh for my senior year (Sporting News)