From the Archives - Kirk Cousins 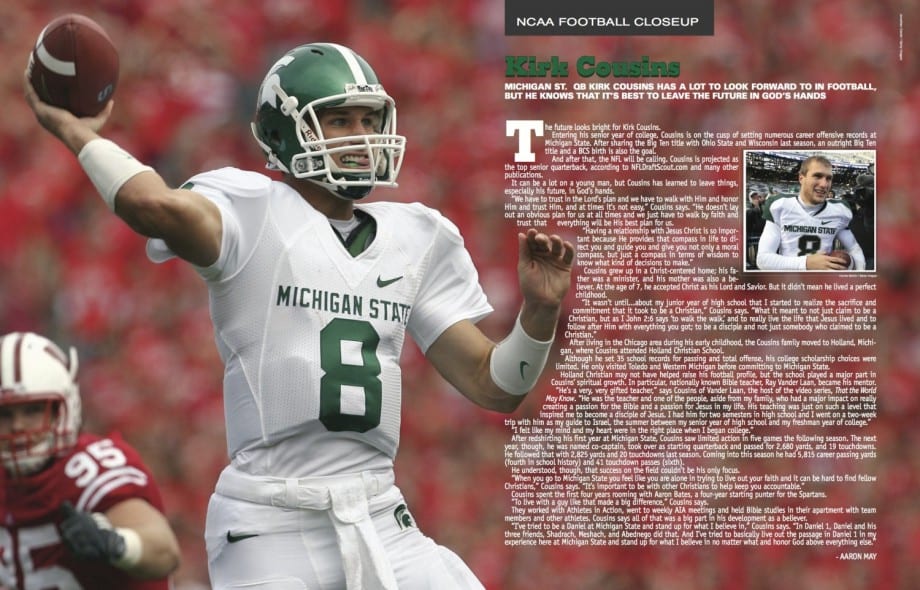 The NFL Draft starts on Thursday, April 26 and former Michigan State quarterback, Kirk Cousins, will be hoping to hear his name called by an NFL team some time in the early rounds. In our story about  from the Summer 2011 issue of Sports Spectrum, Cousins talked about his future in the NFL.

Entering his senior year of college, typically a college football player’s most productive year, Cousins is already first in Michigan State history for passing percentage in a career, and is the career leader for passing efficiency. He will also have a chance to finish first or second in passing yards, total offense, passing completions, touchdowns and passing attempts this season.

After sharing the Big Ten title with Ohio State and Wisconsin last season, an outright Big Ten title and a BCS birth is the goal.

And after that, the NFL will be calling. Cousins is projected as the top senior quarterback, according to NFLDraftScout.com and many other publications.

A great season could mean big things for the future of the Illinois-born gunslinger. First round pick? Franchise quarterback? Future Hall of Famer?

Cousins grew up in a Christ-centered home; his father was a minister, and his mother was also a believer. At the age of 7, he accepted Christ as his Lord and Savior. But it didn’t mean he lived a perfect childhood.

“It wasn’t until…about my junior year of high school that I started to realize the sacrifice and commitment that it took to be a Christian,” Cousins says. “What it meant to not just claim to be a Christian, but as I John 2:6 says ‘to walk the walk,’ and to really live the life that Jesus lived and to follow after Him with everything you got; to be a disciple and not just somebody who claimed to be a Christian.”

After living in the Chicago area during his early childhood, the Cousins family moved to Holland, Michigan, where Cousins attended Holland Christian School.

Cousins started at quarterback in his junior and senior years when he set 35 school records for passing and total offense. He even led the team to their first playoff berth. However, there was not a lot of buzz for Cousins as a major college prospect. Scout.com ranked him as only a two-star quarterback in 2006, and Cousins’ college scholarship choices were limited as he only visited Toledo and Western Michigan before committing to Mark Dantonio and Michigan State.

Holland Christian may not have helped raise his football profile as high as other schools, but attending the school proved to play a major part in Cousins’ spiritual growth. In particular, a Bible teacher at the school became his mentor and led him to the Promised Land.

“I had a Bible teacher by the name of Ray Vander Laan…he’s a very, very gifted teacher. He was the teacher and one of the people aside from my family, who had a major impact on really creating a passion for the Bible and a passion for Jesus in my life. His teaching was just on such a level that inspired me to become a disciple of Jesus. I had him for two semesters in high school and I went on a two-week trip with him as my guide to Israel, the summer between my senior year of high school and my freshman year of college… three days after I got back from Israel, I moved into my dorm at Michigan State.”

“It was a good experience to be saturated in the Holy Land and in scriptures for two weeks, and then to end up at Michigan State. I felt like my mind and my heart were in the right place when I began college.”

After redshirting his first year at Michigan State, he saw limited action in five games the following season passing for 310 yards and two touchdowns. The next year Cousins was named co-captain, took over Brain Hoyer’s starting quarterback spot and took full advantage of the opportunity passing for 2,680 yards, 19 touchdowns and posting a 60.4 completion percentage.

He followed that with even better numbers last season: 2,825 yards, 20 touchdowns, and a 66.9 completion percentage.

Coming into this season he had 35 career touchdowns, and ranked sixth all-time in Michigan State history.

Cousins understood, though, that success on the football field wasn’t the only thing he needed to be focused on at school. He wanted to grow spiritually.

“When you go to Michigan State you feel like you are alone in trying to live out your faith and it can be hard to find fellow Christians,” Cousins says. “It’s important to be with other Christians to help keep you accountable.”

Cousins spent the first four years rooming with fellow Christian and teammate Aaron Bates, a four-year starting punter for the Spartans, who now has aspirations of an NFL career. Bates and Cousins’ friendship was integral in growing their faith.

“He was a Christian, as well, and to live with a guy like that made a big difference. He and I would do a lot of work with Athletes in Action and we would go to the weekly meetings and be involved in a Bible study in our apartment amongst the team and other athletes, and that was a big part of my development.

Looking to the Future

When Cousins graduates, he will finish with a degree in kinesiology. He always thought he would become a doctor, but NFL scouts have him thinking of an NFL career.

“It’s a dream of mine, just like anybody who plays college football,” he says.

But Kirk realizes that his future is not his to plan, it’s in God’s hands.

“Ultimately, the whole NFL thing and the future in general, whether you are playing in the pros or just your future, whether you’re an athlete or a college student in general, most of us don’t know what’s going to happen in the next few years.”

“We have to trust in the Lord’s plan and we have to walk with Him and honor Him and trust Him, and at times it’s not easy. He doesn’t lay out an obvious plan for us at all times and we just have to walk by faith and trust that everything will be His best plan for us.”

“Having a relationship with Jesus Christ is so important because He provides that compass in life to direct you and guide you and give you not only a moral compass, but just a compass in terms of wisdom to know what kind of decisions to make.”