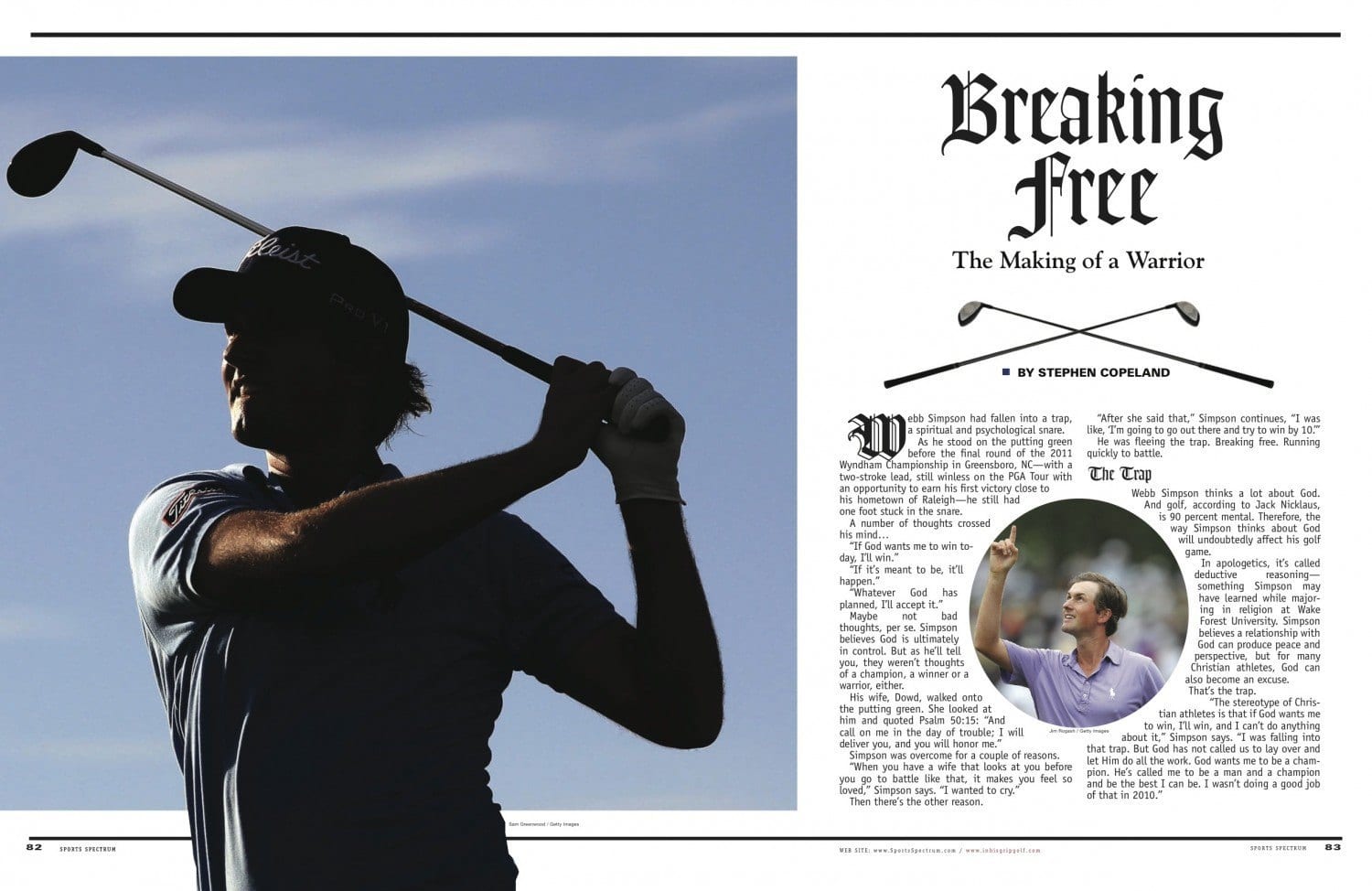 Webb Simpson had fallen into a trap, a spiritual and psychological snare.

As he stood on the putting green before the final round of the 2011 Wyndham Championship in Greensboro, NC—with a two-stroke lead, still winless on the PGA Tour with an opportunity to earn his first victory close to his hometown of Raleigh—he still had one foot stuck in the snare.

A number of thoughts crossed his mind…

“Whatever God has planned, I’ll accept it.”

Maybe not bad thoughts. Simpson believes God is ultimately in control. But as he’ll tell you, they weren’t thoughts of a champion, a winner or a warrior, either.

His wife, Dowd, walked onto the putting green. She looked at him and quoted Psalm 50:15: “And call on me in the day of trouble; I will deliver you, and you will honor me.”

“When you have a wife that looks at you before you go to battle like that, it makes you feel so loved,” Simpson says. “I wanted to cry.”

He was fleeing the trap. Breaking free. Running quickly to battle.

In apologetics, it’s called deductive reasoning—something Simpson may have learned while majoring in religion at Wake Forest University. Simpson believes a relationship with God can produce peace and perspective, but for many Christian athletes, God can also become an excuse.

“The stereotype of Christian athletes is that if God wants me to win, I’ll win, and I can’t do anything about it,” Simpson says. “I was falling into that trap. But God has not called us to lay over and let Him do all the work. God wants me to be a champion. He’s called me to be a man and a champion and be the best I can be. I wasn’t doing a good job of that in 2010.”

Simpson admits there wasn’t a deep sense of urgency when he joined the Tour in 2009. He rarely stepped on the course thinking, “I’m going to shoot 62 today.” If he was supposed to win, he’d win. It was a trap that, he believes, led to six consecutive missed cuts in 2010, a world golf ranking of 229, and nearly losing his Tour card if it wasn’t for a fourth place finish in the next-to-last event of the 2010 season.

“I was swinging the pendulum as far as a pushover Christian,” Simpson admits. 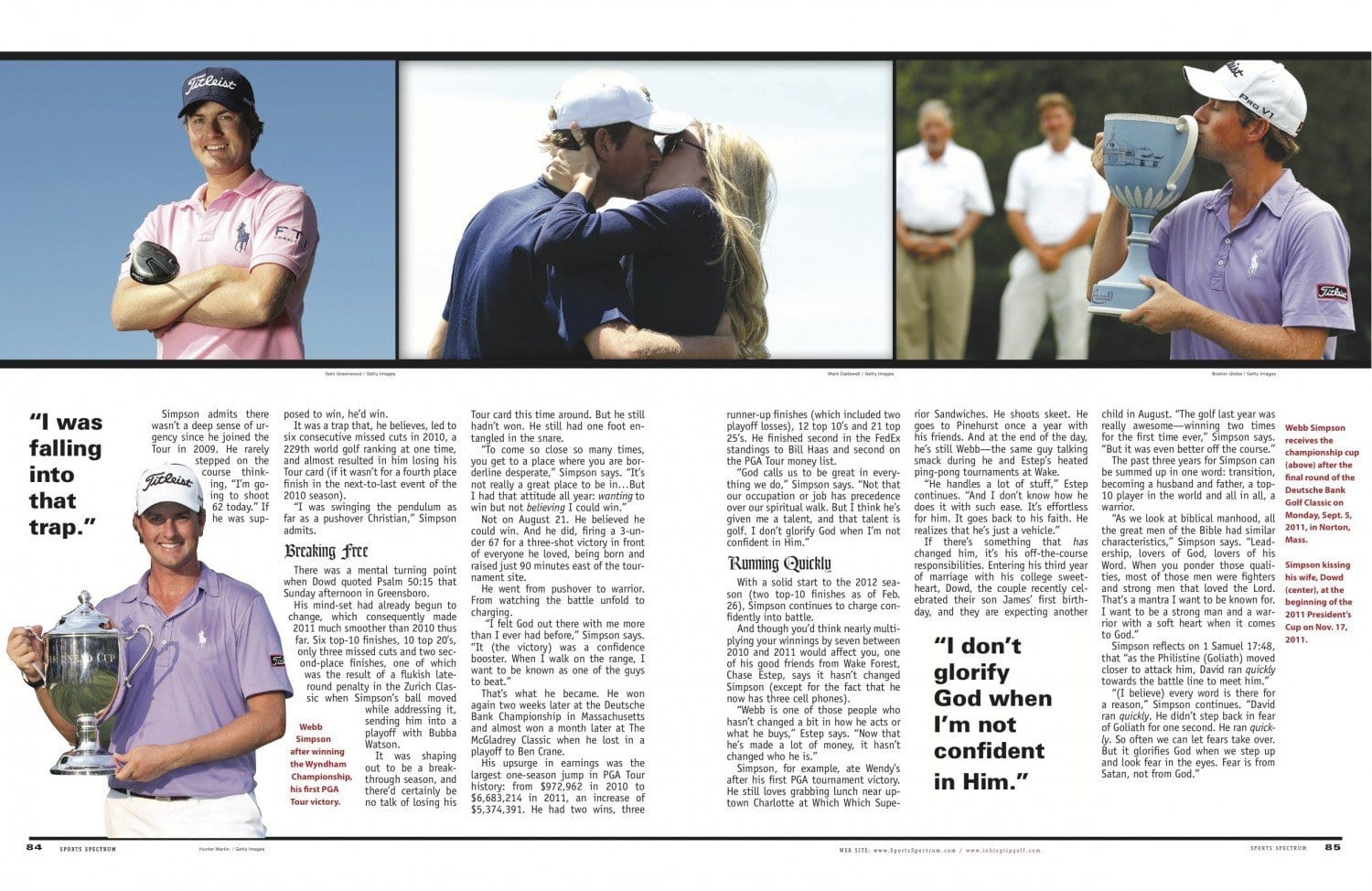 Before the Wyndham Championship, he had already racked up six top-10 finishes, 10 top-20 finishes, and two second-place finishes, one of which was the result of a flukish late-round penalty in the Zurich Classic when Simpson’s ball moved while addressing it, sending him into a playoff with Bubba Watson.

It was shaping up to be a breakthrough season, and there’d certainly be no talk of losing his Tour card in 2011. But he still hadn’t won. He still had one foot entangled in the snare.

“To come so close so many times, you get to a place where you are borderline desperate,” Simpson says. “It’s not really a great place to be in…But I had that attitude all year: wanting to win but not believing I could win.”

There was a mental turning point, however, when his wife Dowd quoted Psalm 50:15 that Sunday afternoon in Greensboro. She believed he could win. He believed he could win. And he did, finally, firing a 3-under 67 for a three-shot victory in front of everyone he loved, being born and raised just 90 minutes east of the tournament site.

He went from pushover to warrior. From watching the battle unfold to charging.

“I felt God out there with me more than I ever had before,” Simpson says. “It (the victory) was a confidence booster. When I walk on the range, I want to be known as one of the guys to beat.”

That’s what he became. He won again two weeks later at the Deutsche Bank Championship in Massachusetts and almost won a month later at The McGladrey Classic when he lost in a playoff to Ben Crane.

“God calls us to be great in everything we do,” Simpson says. “Not that our occupation or job has precedence over our spiritual walk. But I think he’s given me a talent, and that talent is golf. I don’t glorify God when I’m not confident in Him.”

His confidence on the course has only grown, and on June 17 of last year, Simpson won his first major championship, the 2012 U.S. Open.

“Every human being has fear, every human being has anxiety,” Simpson said at a men’s event at Forest Hill Church in Charlotte, NC, after winning the U.S. Open. “I still have it as a golfer, even though I’ve won three times and have won a major. I still have tons of fear. But God says, ‘Give Me your anxieties, give Me your burdens, and lay them at My feet. I will take them from you, and you’ll have peace.’ I get to claim that on the golf course. I play freer as a golfer. I play better as a golfer because I have a God who loves me and wants me to give Him all of my anxieties and fears.”

And it all began in 2011, when he began to change his mental approach to golf in the context of his faith. Since then, he has continued to charge confidently into battle.

“As we look at biblical manhood, all the great men of the Bible had similar characteristics,” Simpson says. “Leadership, lovers of God, lovers of his Word. When you ponder those qualities, most of those men were fighters and strong men that loved the Lord. That’s a mantra I want to be known for. I want to be a strong man and a warrior with a soft heart when it comes to God.”

Simpson reflects on 1 Samuel 17:48, that “as the Philistine (Goliath) moved closer to attack him, David ran quickly towards the battle line to meet him.”

“(I believe) every word is there for a reason,” Simpson continues. “David ran quickly. He didn’t step back in fear of Goliath for one second. He ran quickly. So often we can let fears take over. But it glorifies God when we step up and look fear in the eyes. Fear is from Satan, not from God.”

Stephen Copeland is a staff writer and columnist at Sports Spectrum magazine. This story was originally published in the In His Grip section of the Spring 2012 issue of Sports Spectrum.

UConn star Paige Bueckers, after tearing ACL, feels 'God is using me as a testimony'

GET IN THE GAME PODCAST: Juan Pierre - Former MLB Player

Get our weekly newsletter in your inbox every Wednesday morning.