From the Archives: Josh Hamilton 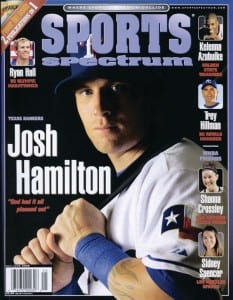 Not twice or three times but eight times Josh Hamilton went to drug rehabilitation—and not once did his trips lead to recovery.

With no place to go and a court order preventing him from going to his own home where his wife Katie, along with his daughter and stepdaughter lived, he arrived on the doorstep of his grandmother, Mary Holt, at 2 a.m. after a drug binge. He had lost one-fourth of his weight from a 6-foot-4-inch frame that today carries muscled, can’t-pinch-an-inch 240 pounds.

“I had nowhere else to go,” said Josh, “but something clicked in my head. My grandmother had always told me I could come to her for any reason, at any time.”
He had grown up a baseball’s throw from a classic “praying grandma.”

“As long as I can remember, my grandmother was always at church when she wasn’t working,” he said. “She also never missed any of my games—any sporting event growing up, never missed one.”

How the home of a grandmother could provide refuge and produce recovery that eight stints in rehab couldn’t is a mystery known only to God. But it wasn’t the only miracle that brought Josh to where he is now.

Before the journey to his grandmother’s, and even while Josh was still in his addiction, Katie Hamilton had heard her own miracle.

Josh and Katie were married in November 2004, and in January 2005 he had a relapse that shook his new bride. “I was like, ‘We may have a long road ahead of us,'” said Katie. “I just spent the next few days in prayer, and that’s when I felt God lay it on my heart that Josh was not only going to play baseball again but that the call on his life was so much greater than baseball. It was going to be to share Christ with people and to share what God has done in his life.”

Sickness, oddly enough, brought the Hamilton family together after Josh had made the God-led trip to his grandmother’s home. The Hamiltons’ baby daughter, Sierra, became sick with flu serious enough to require hospitalization. Katie soon came down with the same flu, and then Josh. Katie had called Josh when the baby became ill, and he helped take care of Sierra. Then he nursed Katie when she fell sick.

“Taking care of each other that whole week we thought, ‘Well, maybe we still care about each other, maybe there’s still something here,'” remembered Katie.
Today, Josh knows that Katie’s prayers and the prayers of many others have led him to freedom from drugs and a place in major league baseball. “It’s such a great thing to see how God never leaves your side, or is always waiting on you to come back to Him,” Josh said.

His own prayers are not about continued success in baseball. “Every day I wake up, I pray that today I’ll be a responsible Christian man, a responsible husband, and a responsible father. Keeping that order—keeping God first—helps me do all those things.”

The entire story was published in our May/June 2008 issue. His testimony is also featured in our new Wisdom & Sports book, which can be purchased here.