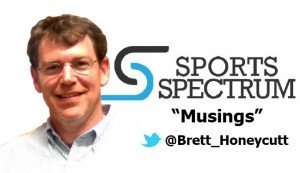 If you wondered why Kansas City Royals fans were booing New York Yankees All-Star Robinson Cano last night and also on Monday night during the Home Run Derby, it was because he seemingly lied.

Most commentators, writers, etc., failed to mention that fact when they derided the Kansas City fans for booing. The booing was merciless and constant—during the Home Run Derby, when Cano, the defending Home Run Derby champ, failed to hit a home run (0-for-10), and each time he took the field or came up to bat.

What irked the fans was that Cano, back in June on ESPN, said he would choose a Kansas City Royals player for the Home Run Derby. Then, instead, without explanation or apology, chose three other players (L.A. Angels star Mark Trumbo, Toronto power-hitter Jose Bautista and Detroit star Prince Fielder).

It seemed completely opposite of what he said to ESPN in June.

“That’s gotta be the right thing, you gotta pick one of the Royals players,” Cano told ESPN in June. “Cause, I mean, that’s their hometown. I mean, that’s where the All-Stars (game) going to be. So the fans want to see their player there and this way to make it more fun.”

The Royals had only one All-Star, and that was Billy Butler, who had one more home run than Fielder at the All-Star break.

Again, when Cano didn’t choose Butler, he gave no apologies to the fans that he failed to keep his promise.

So, the fans were seemingly justified in their booing, because they saw it as Cano just flat-out lying.

On the surface, I can’t disagree. In a nutshell, what we have is a lie, no reason given, and no remorse.

But there is a reason, at least somewhat of a reason. Cano said he had to pick the team before the players were named, but I’m not sure how much that holds up when you consider that he didn’t know that Trumbo was going to be part of the American League All-Stars, either. The others were considered locks because of how many votes they had, but Trumbo wasn’t a lock. Kansas City was guaranteed one All-Star selection, and most felt it would be Butler.

The most upsetting thing about all of this, though, is the media’s complete disregard for the truth.

But few seemed to care, which was also disturbing.

They showed that by focusing the majority of their stories on the fans and not holding Cano accountable for what he said, which I had to dig for (even though ESPN took the video off their website, it’s still on YouTube).

But even when the media did mention or allude to Cano’s statement, they glossed over it.

Chuck Schilken of the L.A. Times said Cano “hinted” at picking Billy Butler. Yahoo! Sports columnist Jeff Passan vilified the city and said, “A city can’t boo a guy who, in the eyes of most, did nothing more than commit a slip of the tongue and then chafe at those who dare question the source of the jeers.”

Hinted at picking? A slip of the tongue?

So now lying has become nothing more than a hint or a mistake. Yet, Cano never just hinted, he said he would. And he never said it was a mistake. That’s just a misguided writer’s take on the main problem: lying.

They are attempting to redefine the word.

But, as Denver Broncos head coach John Fox famously has said, “It is what it is.”

At the least the media could have held Cano accountable for not keeping his word, then he could feel that what he did was wrong.

Why? Because, well, it is. Lying is wrong. Even by the world’s standards, or at least I thought.

But maybe in our age of enlightenment when U.S. Presidents can follow and enforce some, but not all, laws and when “is” is debated, maybe even lying can be classified as something that it’s not—a mistake, or “a slip of the tongue” as some would like to think.

So, we are left with the media not only redefining a term, but feeling empowered to criticize fans who actually believe that lying is bad.