Next for U.S. archers: fall weddings 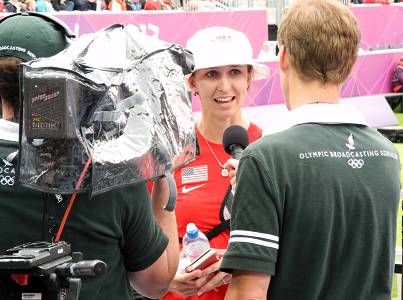 “It’s a little bit sad that it’s already over after working so long for this,” Nichols said. “But it’s a season of life. Even though the Olympic Games are an incredible experience, I definitely think that there are also other highlights in life.”

Wukie easily won his first-round match against Jayanta Talukdar of India, 6-0 in three sets. But Norway’s Baard Nesting proved to be a more difficult competitor, beating Wukie 6-2 in four sets.

“I don’t know if maybe the wind changed a little bit and I didn’t notice, or if I started doing something a little different in my shot,” Wukie said after his loss.

The Olymics experience, Wukie’s first, was still a rewarding one, and he completes the Games with a silver medal from the team competition. He is getting married this fall and plans to continue in his archery training and competition.

“Everybody grows up watching the Olympics, so to actually be an Olympian is really an honor,” Wukie said. “Being able to come here and compete at this level is something I’ll remember for the rest of my life.”

Nichols won her first match in a shootoff against Chekrovolu Swuro of India and in her second-round match led Mongolia’s Bishindee Urantungalag 4-2 after three sets. But Urantungalag won each of the final two sets to take the match.

“You never know how the results are going to go,” Nichols said. “It really doesn’t matter where you are placed or your opponent, because as we’ve seen so many times here already, it is a whole new game when you go out on the finals field.

“You just never know what can happen. All you can do is offer your best, shoot strong and leave the results up to God.”

Like Wukie, Nichols is getting married this fall. But Nichols, a three-time Olympian, sees this year’s Games in London most likely as the end of her Olympics career.

“I want to be able to turn the devotion and the commitment that I’ve had to archery fully into my family and my marriage,” Nichols said. “I don’t know that I’m able to do that if my attentions are divided. I want my heart to be at home.”