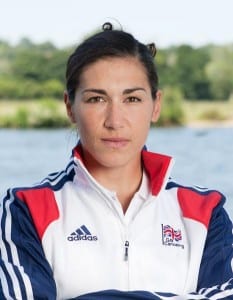 British kayaker Angela Hannah, along with teammates Jess Walker, Rachel Cawthorn, and Louisa Sawers, finished second in their first heat on Monday during the Olympic women’s 500-meter K4 (kayak, with four people) competition. Later in the day, the foursome finished fourth of eight teams in the semifinals to advance to Wednesday’s Olympic final. Read this exclusive interview that Sports Spectrum partner 2K Plus International Sports Media had with Hannah.

Q. How did you get into kayaking?
A. About four years ago. I was approached by someone with Sport England, and she asked if I wanted to try kayaking and just thought I would be the right shape or height to do kayaking.

Q. How long did it take you to see that you had potential?
A. Having been out of sport at quite an intense level for a number of years, I’d always wanted to try and get back into it. When I started the kayaking, I suppose because everything was quite new, it was just really enjoyable. Just the kind of training, having structure, I really enjoyed that side of it. And then, I suppose I didn’t really think why not to do it. I just thought, well, this is good, and I’ll carry on until they tell me I can’t. So, I just carried on with it.

Q. What was your first breakthrough?
A. My first breakthrough would have been two years ago when I did quite well in the 500 and 200 and I was amongst the girls within times, so it meant that I would be fast enough initially to be selected for boats. Because they always have a system, in which case if you’re fast enough, you can be mixed with other people. So I wasn’t obviously fast enough for singles, but for crew boats, I think was 2010, April Regatta, probably the Regatta that helped.

Q. Can you explain the sport? We have K1s, K2s, K4s, and K whatevers, just how does it work?
A. People always ask if I’m a canoer or a kayaker. Kayaking you paddle on both sides, canoeing you just paddle on one side. I’m a kayaker. And K1, would be kayak one person in a boat, so K2 would be two people in a boat, and so forth. We only actually go up to K4. It’s largely based over 200, 500 and 1,000 meters, and it’s basically nine people start in the lineup and first one to cross the line wins. Just go in a straight line as quickly as you can.

Q. And slalom is different, you don’t do slalom?
A. No, slalom’s really different. Boats are very different. Our boats are a little bit shorter than a rowing single. They’re very streamlined, basically, where a slalom would be flat and very low into the water. And we have a little rudder, controlled with a little tiller bar near our feet, so we have a foot plate which we place against and can direct.

Q. What has been the highlight of your kayak career so far?
A. Ah, it’s going to be hard (laughs). Honestly, sometimes, it’s been a point on training camps when you go there and the scenery. We’ve been really fortunate when we’ve gone because we’ll be paddling on lakes and some of them are just stunning and you’ll get up early in the morning, and you’ll go out, and you’ll see what a beautiful creation this world is and just think this is why I’m so happy I’m here doing this. Though there’ll be moments when those are highlights, I suppose when it comes to how well I’ve done, I would say April Regatta last year was definitely a highlight because it got me selected again for last year’s worlds and I was in a very precarious position because I had started the year not thinking I would even be near a chance of being in any of the boats, and then I was, so the April Regatta.

Q. How did you do in the worlds?
A. In the worlds, I came seventh in my event, which was a 1,000 meters. And I was really, really, really happy with that. One, because it was the first time I had done any competition, any international competition, in my K1, in my boat by myself. So, you’re playing all those mental games with yourself, and also I wasn’t particularly well over my racing. I was a little disappointed, because I wanted to maybe try and do better, but I was so happy because I was just so relieved to make the final in the first place.

Q. You’re a follower of Jesus, how did that come about?
A. I was six, and I just remember a dream, which is still very familiar in my head. Basically, the dream, in itself, there was a massive group of people following Jesus to be crucified–interesting for a six-year-old and my family, well, my mom and two sisters were in that group, and they were like saying, “Come Ang, come, we’ll be fine.” And there was another group of people, like, having a party; literally it’s that jacuzzi-situation party, and they’re like, “No, it’s fine, she can just stay with us.” I was, like, in floods of tears, because I wanted to go with my family, but at the same time knew I couldn’t, and I woke up and I was just crying, and my mom came in, and I didn’t understand what was going on, or why I was so affected by it. And I was basically, I suppose, knowing that even then I didn’t trust Jesus, I hadn’t given Him my life, so to follow Him to that point, I just didn’t’ know where I was going. So, my mom prayed with me, and I gave my life to Him when I was really young and I’ve followed Him since.

Q. What difference does it make having Jesus in your life?
A. I suppose some people would say you’ve always been a Christian, so you don’t know anything else. But, you’re definitely a human first, and there’ve been times in my life when I didn’t trust Him. Actually been more angry with Him, and done everything but spend time with Him and it’s been a very depressing, distant time, and I suppose having Him in my life, it just gives me that purpose, and takes away all those things that tie you down in this world, and gives you the freedom to enjoy that as long as you’re working to the best of your ability for Him. That’s always enough. It means I can go on and enjoy myself and not have too much pressure.

Q. Are there any tensions as a Christian in an elite sport about being competitive and things like that?
A. Yeah, definitely. Especially in kayaking, because you often, you’re out there to get that spot for yourself, and then suddenly you’re having to be a team with people at the same time. So, that’s definitely a challenge, because you’re often told or encouraged to be selfish so that you yourself can get those positions, yet it does go against your nature, which you’re trying to be more like Jesus, caring, looking out for others. It’s really difficult. Or even when they are being like that to you, and yet you’re supposed to love your neighbor, and this is really difficult. It’s like, “Oh, I’m supposed to love them, but I don’t like them.” So, it’s really difficult. I’d say any sport is difficult, but it’s difficult in kayaking. I’ve definitely found it challenging to think of people’s interests, and where they are with the Lord, put that first before how they’re doing in a boat next to me. Love the person, and care about their eternal situation.

Q. Are you a competitive person. Is winning important to you?
A. Anyone knows me is like, “She’s the most competitive person ever.” (laughs). But, I enjoy doing things sometimes when I don’t have to even worry about any kind of competition. I can enjoy something for fun. But, yes, in this situation, in kayaking, you are driven if someone’s in front of you, you want to be in front of them. So, I would say, I’m very competitive at trying to win, but I think it’s just also my expectations of myself. If someone beats me and they’re amazing, I’m happy for them. But, it’s one of those things, if you keep thinking you can do better, it will keep driving you. I suppose that’s what’s always kept me going, not “I will beat them at whatever the cost is.” I can know I can still get more out of myself, so I’ll carry on.

Q. What does prayer mean to you?
A. A really good time that I can spend with God. I definitely don’t know enough of it. But I suppose when it comes to training camps, especially, and I find those times really difficult because it feels basically like me and everybody else. ‘Cause I can’t really talk to them in the same way for them to understand where I’m coming from with the Lord. Apart from having family members perhaps to talk to about how I’m feeling, it’s my only route, really, with focusing on what’s really important and having that relationship with the Lord, and it usually just calms me. Going away in training camps, because I know I spend so much time in prayer, it is such a good time, because my relationship with the Lord is just so much better during those times, because I have to just rely on Him for everything.