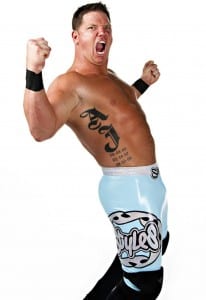 This edition of Sports Spectrum “Conversations” features the man who many people call the face of TNA Wrestling (Thursdays 8 ET SPIKE TV), the “Phenomenal” AJ Styles. Styles (born Allen Neal Jones) is a TNA Grand Slam champion, which means he’s held every championship there is to hold in the company, and is one of the most exciting wrestlers in all of pro wrestling today. Styles joins us to talk about his wrestling career, how he became a Christian, what it’s like be a Christian in the pro wrestling industry, why Tim Tebow can’t take his shirt off in public, his love for Christian hip-hop, and the Super Mario Bros. The Q&A section is a “best of” from the interview, so to hear more about AJ, listen to the full interview below. Enjoy!

SPORTS SPECTRUM: Many people got into wrestling by either going to a show or watching Hulk Hogan on TV; how were you first introduced to pro wrestling?
AJ STYLES: Growing up in the south, we didn’t have Hulk Hogan, we didn’t watch a lot of that. We had Georgia Championship Wrestling. I remember watching a little of that as a kid but we didn’t always have the best reception as a kid on the TV, so I didn’t watch a lot of it…I watched it, you know, in the late 90’s, just like everyone else, and enjoyed it. I think everybody in the late 90’s and early 2000’s enjoyed it, so I kinda tried it myself.

SPORTS SPECTRUM: So when did that moment come, when did you decide, “I’m going to do this, I’m going to make wrestling my career”?
AJ STYLES: A couple of friends of mine took me to a training school where they were going to get trained and I said, “Well, I went with you. I might as well get in there and try it for myself.” And as soon as I got in there I knew that this was something I could do.

SPORTS SPECTRUM: You spent some time in WCW before it closed; talk about early in your wrestling career.
AJ STYLES: I got signed with WCW. I was with them, I think, for about five whole months before they went under and it was a heartbreaker for me. I had finally made it and was given an opportunity to make a little bit of money and it kind of fell out from under me. So I had to go back to the independents, and I was determined to make it somewhere and by then there was only one company so it was really hard…I got invited to a WWE camp, went there, and got offered a developmental deal, turned it down and about two months later TNA started up and my life changed for sure.

SPORTS SPECTRUM: So how did you become a member of the TNA roster?
AJ STYLES:: There was a company going around the world, called World Wrestling All Stars and a bunch of talent was on there, when Eddie Guerrero wasn’t with WWE, he was there, Jerry Lynn was there, just a lot of awesome wrestlers were there, and Jeff Jarrett was, of course, there. And in those matches I had with Jerry Lynn doing World Wrestling All Stars, you know we would just have a great match and Jeff Jarrett (the founder of TNA Wrestling) would talk to me about TNA and starting up a new company. And I’m pretty sure I was the first guy ever signed by TNA.

SPORTS SPECTRUM: So you’re a TNA Original and the first guy ever signed by TNA?
AJ STYLES: I’m pretty sure, I would have to ask Jeff about that, but it doesn’t get any more original than AJ Styles. 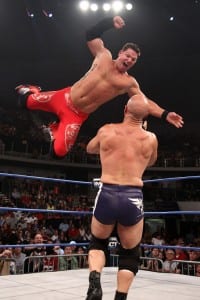 SPORTS SPECTRUM: And how long has it been in TNA now, 10 years?
AJ STYLES:: 10 years. Absolutely. 10 short years. 10 years seems long to a lot of people, but for a wrestling company, we’re still babies in the wrestling industry.

SPORTS SPECTRUM: When did you become a Christian?
AJ STYLES:: In ‘93 I went to a judgement house… I went to a church and they basically tell a story, and you go from room to room, and they tell a story about how some kids will go to heaven and some will go to hell and you get to experience that with them. And we went through this play and it was pretty dramatic, you know, and I remember at the end, I was with a bunch of my friends and they took us into a room and they said if anybody wants to accept Christ, here’s your’e opportunity. Everybody bowed their heads and everybody said a little prayer with us and they said, “If you said that little prayer, raise your hand, and just stay with us for a couple of minutes and we’ll talk to you about it.” So, of course, I raised my hand and I thought, “Well shoot, my friends are all going to stay behind because we’re all in the same boat.” I was the only one. I was the only one who raised his hand and accepted Christ, and it was a weird moment because I couldn’t believe that they didn’t wanna accept Christ.

But at the same time it was a great moment for me, and I was convicted and made up excuses immediately, you know, of why it was okay to date this girl and do this stuff with this girl because of love and whatever, but for me… but that’s when my testimony really starts, because I asked God to save me, and that was exactly what he was going to do, no matter what pain I had to go through to understand what he went though for me. From breaking up with a girlfriend to going to jail, it was just chaos there for a little bit until I met the right person to say, “Hey why don’t you come to church with me?” And I met a guy, our youth pastor, just an awesome, awesome man… and I believe that it’s one thing to get saved. It’s another for someone to show you how to be a man of Christ… He showed me how to be a man of God. And I’m still working on it, still doing my best. But I’m so thankful and blessed that he was in my life to just be an example for me.

SPORTS SPECTRUM: Do you find it tough being a Christian in the pro wrestling world?
AJ STYLES: Not really. I mean there are things that go on that I’m not proud of in this crazy business. But I’ve made friends, and I’m not ashamed of Jesus Christ; everybody knows that, they don’t bother me about that, they don’t ask me to do stupid things, they don’t try to encourage me to do things that they know I’m not going to do anyway, but they have a lot of respect for who I am, and that I’m sticking to what I believe. And that’s something in itself is just trying to be the man I’ve said I’m going to be. And it’s easier said than done, but I do my best.

Sometimes I think I’m the worst player on God’s team but, you know, I just get out there and just try. Just try to make that prayer, be that Christian man that God has called me to be. Just be that guy, even if it’s just for a little bit for someone to see. You never know what someone is going to see. You gotta always be alert and pay attention to what’s going on around you that you don’t make the mistake of causing someone else to stumble…

You’re not perfect. That’s something that society forgets, they think we call ourselves Christians because we think we’re perfect but that’s the complete opposite; we’re sinners and we know it. We stink at life! So we need someone to help us out with it that we can call on and to change us and to forgive us more than anything. And God’s done exactly that.

SPORTS SPECTRUM: You take a lot of high risks in the ring, is there ever any fear?
AJ STYLES: I’ve gotten that question a lot. There is fear, but not when it’s go-time. When it’s time to do it, if I hesitate, that’s when you get hurt. You’ll never se me hesitate. I’m gonna go all or nothing.

SPORTS SPECTRUM: GRITS does your theme song, how did that come about?
AJ STYLES: We were down at Universal a few years ago and I was speaking… it was a whole giant Christian event. It was awesome! GRITS was there performing, I was there talking, and I was like, I gotta meet these guys. I had been listening to them for so long. And it turned out that they were friends with Jeff Jarrett… and we just got to talking and got them to do some entrance music for me and it’s awesome! It’s one of the best that I think that I’ve had.

SPORTS SPECTRUM: Are you a big Christian hip-hop listener?
AJ STYLES: I am actually, ridiculously love Christian rap. It’s ridiculous, it really is; it’s bad. I have an addiction. That whole 116 Clique, with Trip Lee, Lecrae, all those guys, Tedashii, I can’t get enough of it.

Favorite current video game?
NCAA 13 Football. I’m one of those guys who will play that and play Madden and have my college guys go up to play Madden.

Favorite old school video game?
My favorite old school video game, it’s more sentimental, so its probably not the best game, but its sentimental to me because my dad got the last one at the store. And it was Super Mario Bros. 2. And yes, I know that it wasn’t a Mario game but then they decided to make it a Mario game at the last minute, but I thought it was cool, and it was the second Mario game.

Favorite Bible verse?
Romans 1:16… Lecrae preaches that on everything, that’s his deal. So that’s been on my brain recently, not being ashamed of being a follower or Christ. 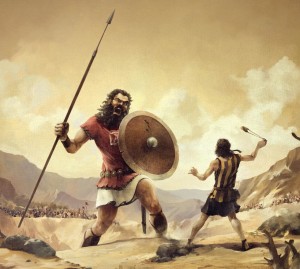 Favorite Bible character?
I think David, you know David and Goliath, I remember looking through my mom’s old Bible and having the picture of David swinging that sling and hitting Goliath and that’s something in my head that I’ll never forget, (kid voice) “This kid has killed this giant, took a sword and cut off his head, that’s awesome, yeah, that’s a warrior.” I think that David might be my favorite.

Listen to the full interview below, including his thoughts about Tim Tebow, wrestling Chris Jericho, the movie “The Wizard”, and if he’s sick of wrestling longtime nemesis Christopher Daniels.