From the Archives: Reggie White 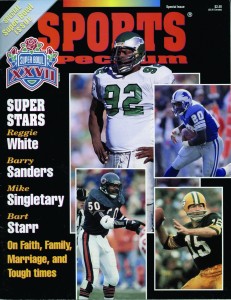 Reggie White was a 13-time Pro Bowler, 2-time Defensive player of the year, a Super Bowl champion, and a Hall-of-Famer. The “Minister of Defense” recorded 198 sacks in his career and is one of the best defensive players to ever play in the NFL. But his outspoken nature to boldly proclaim his faith is what separated him from many others. He passed away in 2004, but his life’s impact continues to touch people today. He was featured in many issues of Sports Spectrum from over the years. Here is an excerpt from his feature in our special Super Bowl XXVII issue from 1993, when White played for the Philadelphia Eagles:

White has earned huge levels of respect in the NFL, but it’s nothing new. The people who knew him when he was in college at Tennessee feel the same way.

“Basically, Reggie is the same today as he was when he was playing football for Tennessee,” says 33-year-old Avery Huff who played on two UT football teams with White. Whatever White does, Huff feels, he always goes after it with gusto.

Perhaps another reason is that White does not criticize those who don’t know Christ as their Savior. Instead, White says he tries to set an example and be the person that God has called him to be.

“The thing I’m learning about living for Jesus is that it’s not what you say but how you live,” White says. “You can talk about Jesus all you want to, but if you aren’t living the life God has called you to live, nobody’s going to respect you and they aren’t going to respect the God you’re serving.” 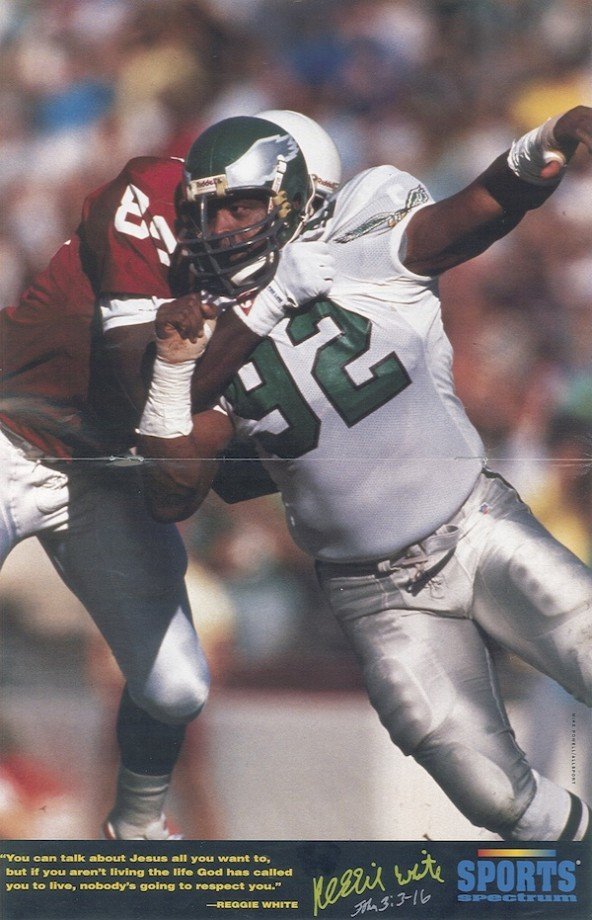 White has observed that many players in the NFL are turning to Islam and other religions simply because they see more commitment in those who serve other gods.

“The difference between Christians and Muslims is that Muslims are often more faithful to their god than we are,” he admits. “A lot of people don’t want to be Christians because they don’t see any commitment. I heard of a situation where one of the greatest basketball players who ever played the game became a Muslim because he saw more commitment in the Muslim faith than he saw in the Christian faith. He also saw more hypocrites in the Christian faith. And that’s what has happened to not only a large number of prominent athletes but a large number of people in general because they don’t see a commitment to the Christian faith. So as a result, they go and look for other things that they feel are real.”

Which brings up a good point. How do we know that God is real or that Christ is who He said He is?

“The thing is that I know,” White explains, “Some people just don’t want to know. You look at atheists. They know there’s a God. They know if there wasn’t they wouldn’t be fighting so hard to disprove that there is no God. You look at Madalyn Murray O’Hair, a woman who says she doesn’t believe in God and yet she is a woman who has spent her whole life trying to get God out of the schools. I know God is real. I know personally He’s real and a lot of people know God is real and, as I say, people either don’t know or they don’t want to believe. The Bible says that a natural man does not understand the things of the Spirit. That’s the only way you can explain it.” White says that it is also difficult to explain to some people why just being a “good” person and believing in God is not good enough.”

Still, Reggie said he can understand why people are turned off by Christianity. “In a lot of ways, you really can’t blame people for rejecting the Gospel, because the church as a whole is not showing the example they need to in order to win people to Jesus and keep them in there,” White says. “Sometimes I think the church has hurt more people concerning the kingdom of God than it helped. A lot of people have this Pharisee-type of attitude that says, ‘Hey, if you aren’t living this way or that way, you’re going to hell.’ The thing that is so interesting in the Scriptures is that Jesus told Peter that if he truly loved Him, Peter would feed his sheep.” (see John 21:15-20)

Many people think the kind of life Christ wants a person to live will make a person seem too soft. That, Reggie feels, is not true.

“Actually, it makes you more of a man,” White says. “It takes a man to serve Christ, because of all of the trouble we have to go through because we are Christians. The devil is going to bring as much difficulty on you as he can. In I Peter 4:12 it says, ‘Don’t fear when darkness and tribulation come about.’ We have to go through stuff. We have to hurt. But Jesus said rejoice in that hurt.

“Think about the apostles. They were beaten and died violent deaths. There were times when, after they were beaten, they went out rejoicing because they felt privileged to be beaten like Jesus was beaten. When Paul and Silas were in prison, they were signing hymns. I’m sure they were hurting, because the Scripture says that their backs were beaten. But they found it a privilege to go through the same things Jesus went through.”

“If you look at our country, we really don’t have much to complain about. You look at other countries, and people are having it hard, but the only thing they have to trust is Jesus.”

By that time, even the Minister of Defense would admit that it’s far too late for a wake-up call.

This story was published in the Super Bowl XXVII Special issue of Sports Spectrum.