In a recent feature with Vogue Magazine, Tim Tebow mentioned a possible future career in politics: 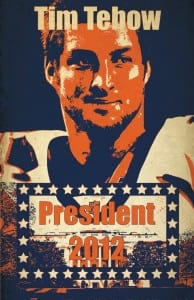 “You can get looked at in a certain light, or people think, This is this type of person, he wouldn’t do this. Sometimes it’s fun breaking those norms,” he says. “There are a lot of goals and ambitions that I have in life, things I want to accomplish. Who knows? I mean—it could be politics one day. I want to have a life that can help people.”

You can run for President of the United States once you are 35 years of age, which means President Tebow, now 25, could be a possibility in the 2024 election. “I’m Tim Tebow, and I approved this message,” may one day hit the airwaves.

Rangers unsure when Josh Hamilton will return to the lineup

Texas Rangers slugger Josh Hamilton has been dealing with a sinus infection that has kept him from playing baseball since September 18th. But the Rangers are still unsure when he may return.

Tim Hudson and the Atlanta Braves are closing in on a playoff berth. Their magic number to clinch a Wild Card spot is down to two games after Hudson pitched 7.1 innings and gave up just a single unearned run to beat the fading Phillies. Hudson is being considered to be the starter for the Braves in the Wild Card one-game playoff, likely to be hosted at home in Atlanta.

Hudson is a leader in the Braves clubhouse and a strong man of faith. He spoke with CBN about his relationship with Christ earlier this year:

Notable Quote: “We are far from talking about the Super Bowl right now…What we need to focus on is getting one win.” – Drew Brees, after the Saints’ loss to Kansas City, dropping them to 0-3.

Humble yourselves before the Lord, and he will lift you up in honor. ~James 4:10

Good morning world. Thank you God for your many blessings.