Ryan Vogelsong struck out a career-high nine batters in 7 innings Sunday night to help the Giants even the series at 3-3 against the Cardinals. When asked by FOX’s Erin Andrews about his start, he gave glory to God:

“I just believe. I believe that God had a plan for me. And all the hard work and all of the travels to Japan and Winter Ball, He was setting me up for this moment. And I just believe that it’s my time and He’s with me and He’s doing good things for me right now.” – Ryan Vogelsong, SF Giants pitcher 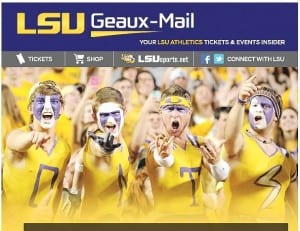 LSU sent an email out last week containing a photo of a fan group called The Painted Posse, but the photo was digitally altered. The Painted Posse is a group of Christian students who paint their faces and chest LSU school colors with small crosses on their chest. The students were shocked to see their crosses missing in the photo.

“I was a bit surprised because our pictures get used so frequently, and the cross had never been edited before,” said Posse member Cameron Cooke in an interview with Campus Reform.

“The cross painting is important to me because it represents who I am as a Christ follower,” Cooke added, “and it reminds me who I need to act like in Death Valley.”

“We don’t want to imply we are making any religious or political statements, so we air-brushed it out,” the school said in a statement. “Only one of the students, who didn’t appreciate it, actually contacted us about it. So next time, we’ll just choose a different photo.”

The fan group was formed in 2003, and has frequently gotten themselves on TV and in magazines like Sports Illustrated.

“As much fun as that is,” Cooke said of the attention, “it’s more fun to see the fact that our Savior is represented in the cross.”

School officials say they will stay away from any religious or political symbols in their marketing efforts out of the fear of offending anyone.

The couch that Jeremy Lin once slept on before becoming an overnight sensation for the New York Knicks is gone.

“It was a rental couch,” Fields told the New York Post. “I had to give it back. I wonder if they even know (the couch’s fame). It’s probably boxed up.”

Fields and Lin have both moved on from the Knicks. Lin is now with Houston, and Fields is now with the Raptors.

Notable Quote: “I understand the strong emotions by some people about our family’s decision to care for a pet. As a father, it is important to make sure my children develop a healthy relationship with animals. I want to ensure that my children establish a loving bond and treat all of God’s creatures with kindness and respect. Our pet is well cared for and loved as a member of our family.” – Michael Vick, on getting a dog for his kids

Lookin fwrd to speakin to the Brookwood Fellowship of Christian Athletes tonight!Only what u do for God will last when its all said n done.

Think about this!16 One who is wise is cautious and turns away from evil, but a fool is reckless and careless.(Proverbs 14 : 16 – ESV)

He loves usWith all His heartHe loves usGave His own

Thank u Lord 4 allowing us 2C 2day. Seek 2 imitate Christ’s humility. Philippians 2:1-5. As servants we must put others interests b4 ours