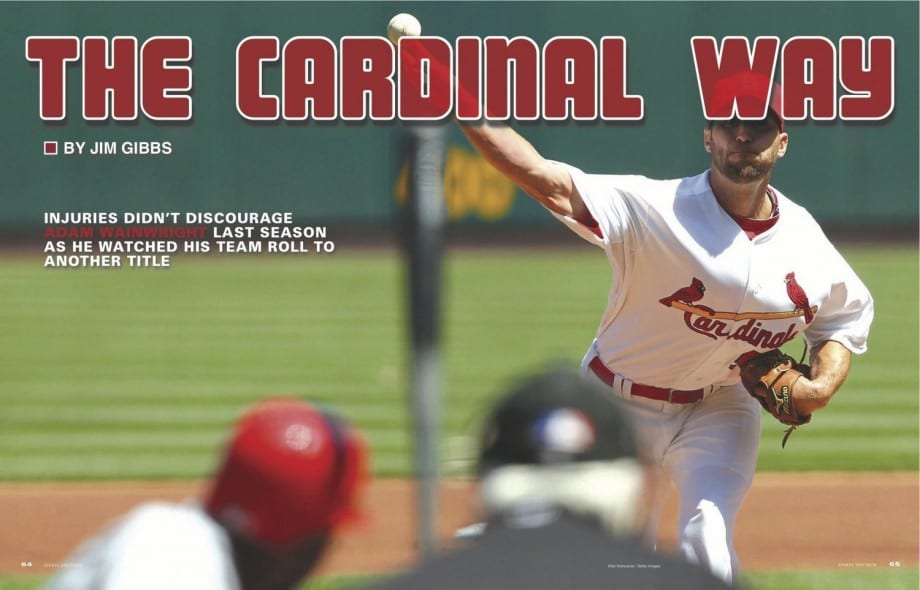 Adam Wainwright’s 2011 season had ended before it began. On the first day of spring training, on the very first day of batting practice, he blew his arm out.

“It was one of those things that was just hard to believe,” Wainwright says. “We had literally just started spring training and, on the first day of BP, I completely blow my arm out. The pain was just excruciating and I couldn’t even lift a shampoo bottle with my throwing arm for a long time. It was very disappointing at first because we were all coming into camp, ready for a new season to start. And, suddenly, my season was really over before it began.”

Despite the devastating injury, though, Wainwright had something that helped him through everything.

“It’s never a good thing when you have an injury and the doctors tell you that you’ll be out for the season,” he says. “That’s something that no athlete wants to hear. But the amazing thing is that, through Christ, I was able to adjust to that situation and be at peace with it. Not long after it happened, the Lord just gave me a huge sense of peace about the whole thing. I could just feel his peace and reassurance that my identity is not in baseball or the fact that I’m a professional athlete or anything else. It’s in my Lord and Savior Jesus Christ. I’ve got a Savior who tells me that I’m good enough and that He loves me unconditionally and that it doesn’t matter what the world thinks of me or how the world looks at me or measures me. My identity is in Jesus Christ.” 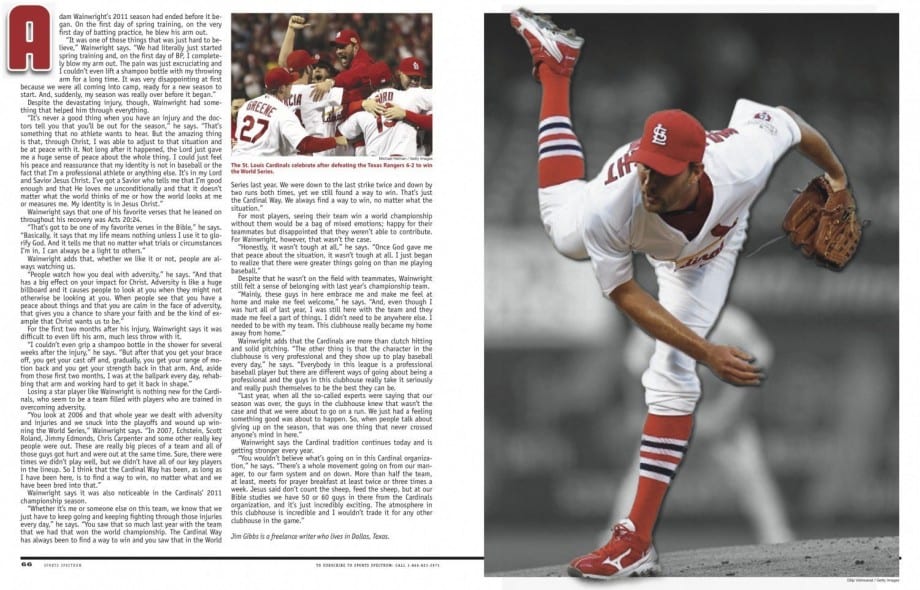 Wainwright says that one of his favorite verses that he leaned on throughout his recovery was Acts 20:24.

“That’s got to be one of my favorite verses in the Bible,” he says. “Basically, it says that my life means nothing unless I use it to glorify God. And it tells me that no matter what trials or circumstances I’m in, I can always be a light to others.”

Wainwright adds that, whether we like it or not, people are always watching us.

“People watch how you deal with adversity,” he says. “And that has a big effect on your impact for Christ. Adversity is like a huge billboard and it causes people to look at you when they might not otherwise be looking at you. When people see that you have a peace about things and that you are calm in the face of adversity, that gives you a chance to share your faith and be the kind of example that Christ wants us to be.”

For the first two months after his injury, Wainwright says it was difficult to even lift his arm, much less throw with it.

“I couldn’t even grip a shampoo bottle in the shower for several weeks after the injury,” he says. “But after that you get your brace off, you get your cast off and, gradually, you get your range of motion back and you get your strength back in that arm. And, aside from those first two months, I was at the ballpark every day, rehabbing that arm and working hard to get it back in shape.”

Losing a star player like Wainwright is nothing new for the Cardinals, who seem to be a team filled with players who are trained in overcoming adversity.

“You look at 2006 and that whole year we dealt with adversity and injuries and we snuck into the playoffs and wound up winning the World Series,” Wainwright says. “In 2007, Echstein, Scott Roland, Jimmy Edmonds, Chris Carpenter and some other really key people were out. These are really big pieces of a team and all of those guys got hurt and were out at the same time. Sure, there were times we didn’t play well, but we didn’t have all of our key players in the lineup. So I think that the Cardinal Way has been, as long as I have been here, is to find a way to win, no matter what and we have been bred into that.”

Wainwright says it was also noticeable in the Cardinals’ 2011 championship season.

“Whether it’s me or someone else on this team, we know that we just have to keep going and keeping fighting through those injuries every day,” he says. “You saw that so much last year with the team that we had that won the world championship. The Cardinal Way has always been to find a way to win and you saw that in the World Series last year. We were down to the last strike twice and down by two runs both times, yet we still found a way to win. That’s just the Cardinal Way. We always find a way to win, no matter what the situation.”

For most players, seeing their team win a world championship without them would be a bag of mixed emotions; happy for their teammates but disappointed that they weren’t able to contribute. For Wainwright, however, that wasn’t the case.

Despite that he wasn’t on the field with teammates, Wainwright still felt a sense of belonging with last year’s championship team.

“Mainly, these guys in here embrace me and make me feel at home and make me feel welcome,” he says. “And, even though I was hurt all of last year, I was still here with the team and they made me feel a part of things. I didn’t need to be anywhere else. I needed to be with my team. This clubhouse really became my home away from home.”

Wainwright adds that the Cardinals are more than clutch hitting and solid pitching. “The other thing is that the character in the clubhouse is very professional and they show up to play baseball every day,” he says. “Everybody in this league is a professional baseball player but there are different ways of going about being a professional and the guys in this clubhouse really take it seriously and really push themselves to be the best they can be.

“Last year, when all the so-called experts were saying that our season was over, the guys in the clubhouse knew that wasn’t the case and that we were about to go on a run. We just had a feeling something good was about to happen. So, when people talk about giving up on the season, that was one thing that never crossed anyone’s mind in here.”

Wainwright says the Cardinal tradition continues today and is getting stronger every year.

“You wouldn’t believe what’s going on in this Cardinal organization,” he says. “There’s a whole movement going on from our manager, to our farm system and on down. More than half the team, at least, meets for prayer breakfast at least twice or three times a week. Jesus said don’t count the sheep, feed the sheep, but at our Bible studies we have 50 or 60 guys in there from the Cardinals organization, and it’s just incredibly exciting. The atmosphere in this clubhouse is incredible and I wouldn’t trade it for any other clubhouse in the game.”

Jim Gibbs is a freelance writer who lives in Dallas, Texas.