Devotion of the Week -- The Lord Uplifts 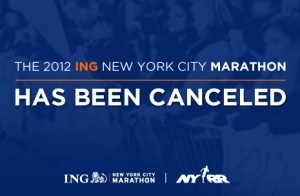 Over the last week, I have been thinking about the proper way to express my thoughts after the aftermath of Hurricane Sandy. Sandy made her presence known on the East Coast, in particular the tri-state area of New York, New Jersey and Connecticut. Houses have been damaged, lives have been lost, and power and heat have been out for days. I live on Staten Island, so seeing my borough for the first time since the storm broke my heart.

One of the sub-stories in New York that became the talk of the town were the sporting events. Mayor Michael Bloomberg postponed the Brooklyn Nets’ home opener against the New York Knicks last Thursday due to limited transportation options. The New York Giants game was played as scheduled Sunday afternoon against the Pittsburgh Steelers. But that wasn’t the main focus of the city in terms of sports.

Until Friday night, Mayor Bloomberg wanted the New York City Marathon to continue – despite most of the city having no power and limited resources. There was much public outcry especially from my borough where the race was scheduled to begin. Bloomberg later cancelled the marathon, but the runners did not let that stop them. This past Sunday, runners took to the streets of all five boroughs helping the people in need by delivering supplies to work sites. It was absolutely incredible to see the runners perform these acts of kindness and charity.

It got me thinking of the Good Samaritan story in the Gospel of Luke. In this story, Jesus is talking with the teachers of the Law who were trying to test Jesus by asking Him what they can do to inherit eternal life. Jesus tells him most importantly to love their neighbors as themselves, but the teacher does not know who his neighbor specifically is.

Jesus goes on to tell the man a parable about a man who was beaten up along the side of a road and left there to die. Two men, a priest, and a Levite rode by, but nobody came to help him. Then, a Samaritan came along the road and takes care of him. Keep this in mind for historical context, Jews and Samaritans have not been very fond of each other since the days of the Old Testament. This is what Jesus says about the Samaritan man in the parable.

“But a Samaritan, as he traveled, came where the man was; and when he saw him, he took pity on him.  He went to him and bandaged his wounds, pouring on oil and wine. Then he put the man on his own donkey, brought him to an inn and took care of him.The next day he took out two denarii and gave them to the innkeeper. ‘Look after him,’ he said, ‘and when I return, I will reimburse you for any extra expense you may have.” (Luke 10:33-35)

Despite the lack of good relations between the two groups of people, the Samaritan still took care of the Jew and made sure that he was well. That is what loving your neighbor truly means. I saw a little bit of Good Samaritan qualities in the marathon runners who took supplies to Staten Island, Breezy Point, Rockaway Beach and all the other ravaged areas in need.

Today, I exhort you to not only keep in your heart, but also keep in your prayers the many people who have been affected by Hurricane Sandy. Also, I exhort you to always be kind to others even though they may not always be kind to you. You can also donate your time to help others in need and show mercy to others like the Lord continuously shows us mercy that we don’t deserve.

Also, in the gospel of Luke, Jesus talks about how we should show mercy to others:

“But love your enemies, do good to them, and lend to them without expecting to get anything back. Then your reward will be great, and you will be children of the Most High, because he is kind to the ungrateful and wicked.  Be merciful, just as your Father is merciful.” (Luke 6:35-36)

So, when helping others, always share the love of Christ in everything that you do!

Ricky Keeler is a contributor to Sports Spectrum magazine who writes a weekly, online devotional for sportsspectrum.com.