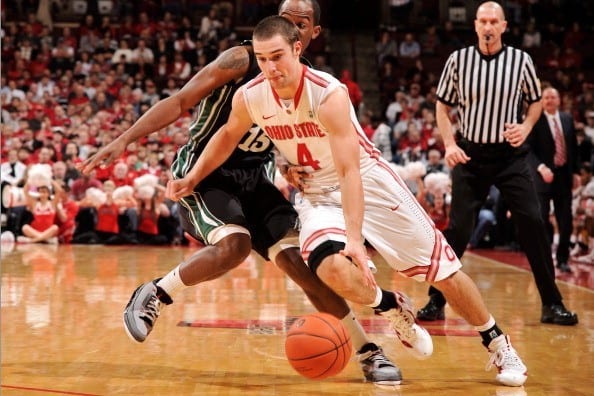 It’s Saturday, March 31, 2012 in New Orleans, Louisiana—the host site of the Final Four. Ohio State is playing Kansas, and the winner will advance to the NCAA Championship game. Ohio State is down 64-61 and Aaron Craft is heading to the free throw line for a one-and-one. There are only 2.9 seconds left. Craft makes the first, but will need to miss the second and hope that he or one of his teammates can get the rebound and a put-back to tie the game. Craft throws the ball towards the rim and actually gets the rebound himself! But he leaves early; the whistles blow. A lane violation. Kansas ball. Ohio State once lead the game by 13, but when the final horn sounded, they had lost by two.

“In the moment, it’s really frustrating, really angry, especially when it’s just one possession, any thing can change the game,” Craft says.

But Craft already had a different perspective than most. Just the previous weekend, Craft’s brother, Brandon, deployed for Afghanistan for the Army on the same day Craft and his teammates had the Elite Eight game against Syracuse. The Buckeyes went on to win that game and advance to the Final Four, but his brother’s deployment that day helped Aaron remember that life wasn’t all about winning and losing basketball games.

“It just put things into perspective,” Craft explains. We’re playing a game that seems like it means a lot. My brother, and there’s so many other people out there that are fighting for something that is a lot bigger than just playing basketball.”

And that Final Four loss to Kansas wasn’t such a great disappointment as it seemed in the moment. “Looking back, we were one of the last four teams in America playing college basketball and that’s something to be proud of and something we were really fortunate to be a part of,” Craft says.

Heading into his junior season, Craft has become one of Ohio State’s main stars and might be the most recognizable guy on campus that doesn’t play football. “It’s weird, to be honest,” he says. “I don’t know. It’s something that just kind of creeps up on you. And I remember coming here freshman year and making fun of John (Diebler) because everyone recognized him and knew who he was. And now it’s kind of come to me and my other teammates.”

But what has kept Craft grounded through all of the pressures and emotions that come with Ohio State athletics and having a brother overseas, is his faith in God and involvement in Athletes in Action.

“I came to Ohio State and was really close to John Diebler and he introduced me to Athletes in Action,” he says. “Monday nights, student athletes lead a Bible study, which is really cool hearing from one of your peers. And then Wednesday nights are weekly meetings for anyone who wants to come out. We average around 100 people, which is awesome…It keeps me grounded and humbled amidst all the things that we have to do for basketball.”

Craft is frequently asked to be a guest speaker at Athletes in Action meetings and often uses the story of the rich young ruler, who asked Jesus how to inherit eternal life. “I get to emcee every once and a while, which is really cool, too,” he says. “For whatever reason, people want to listen to me talk. I don’t know if they’ll feel the same way after I’m done, but it’s always great to be able to do that and share just how God worked in my life to get me to the point that I am right now.”

Even with everything he has on his plate to worry about, Craft, a nutrition major, still manages to find enough time for his schoolwork. He was a first team Academic All-American last season. “I enjoy school,” he says. “I would say I’m somewhat of a nerd. So that definitely helps.”

As the new 2012-13 season rapidly approaches, Ohio State is expected to be a contender for the Big Ten championship and make a deep run into the tournament. Both pre-season polls (AP, Coaches) have them ranked fourth overall. But they will do so without last year’s leading scorer and rebounder, Jared Sullinger, who now plays in the NBA for the Boston Celtics. The Buckeyes will likely need a little more scoring and playmaking out of it’s starting point guard.

Despite all the expectations and pressure that media and fans will cast on him and his teammates this season, Craft feels that God is teaching him to simply have fun with the game of basketball.

“He’s probably teaching me to believe in Him and believe in myself—to not try and push too much,” Craft says. “With the season coming up and with new things happening and expectations and all that, it’s really easy to get caught up in trying to force things and try and rush things and get outside of what I am and what I’m supposed to be doing. So just slowing down and relaxing and having fun playing the game of basketball, because that’s what it’s for in the long run.”

What a novel concept. Having fun while playing a game. Keeps things in perspective doesn’t it?

This story was published in the All-Basketball, October 2012 DigiMag.

INSIDE THE CHAPEL PODCAST: Rockets chaplain Ikki Soma on 'Being a Witness'