Airing It Out -- The way sports should be

By Brett Honeycutt Jan 8, 2013
With all of the scandals, shootings, ill-advised comments (verbally and in social media), and general negativity surrounding today’s sports world, I wondered if sports had finally lost its safe-haven reputation it once enjoyed... 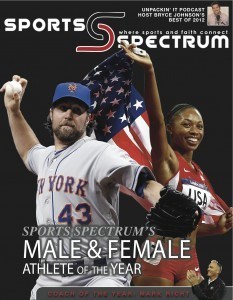 With all of the scandals, shootings, ill-advised comments (verbally and in social media), and general negativity surrounding today’s sports world, I wondered if sports had finally lost its safe-haven reputation it once enjoyed.

Would 2012 be remembered as the first year of a new era, where negativity began to rule the sports world? Had it become like the other news that we always see and read about? You know, the news that primarily highlights the negative (controversies, killings) or the bad side of stories (that actually do have positive sides), and the media people who can’t seem to come to grips with the good side of life?

Or do sports still provide a fun, positive side of life? You know the kind of fun where people see kids as kids instead of opportunities to land NBA contracts or college scholarships, and where people see coaches as grown-up kids who want to have a little fun and enjoy a game?

After thinking about this, and not for that long, I was reminded of four stories that gave me my answer.

1. Grinnell College men’s basketball: In late November, tiny Grinnell College, an NCAA Division III school in Grinnell, Iowa, produced the most talked-about game and individual (Jack Taylor) in the sports world. Every major sports network and internet site, as well as NBA stars Kobe Bryant, LeBron James, Kevin Durant, couldn’t help but talk about it because of the mind-boggling stats.

Taylor, a sophomore guard, had scored an all-divisions record 139 points to lead the Pioneers to a 179-104 victory against Faith Baptist. That Faith Baptist’s David Larson scored 70 points was lost in most of the initial reports about the game.

However, the record-breaking achievements were monumental for more than merely the points scored in the game. At least nine collegiate records were set, including field goals made (52) and attempted (108) by Taylor, as well as three-pointers made (27) and attempted (71) by Taylor.

The fun, though, began about 20 years ago when longtime Grinnell coach David Arseneault came up with a system, based on a formula where he requires his team to take at least 94 shots per game and that 47 of those come from three-point range. To accomplish this, he uses at least 15 players per game (rotating them in groups of five every other minute), and has them shoot the ball every 5-12 seconds while focusing on offensive rebounding and the full-court press (their goal is to force 30 turnovers per game) the entire game.

The nearly 30-year-old event, centered around a men’s basketball game the Friday before final exams, gained national attention the past few years, and again this year when Yahoo! Sports featured it on their homepage with a story (by a Yahoo! writer who attended the game) and some video content (from Taylor).

What “Silent Night” is, in a nutshell, is students having fun in clever and creative ways.

When the game begins, students (dressed in various costumes) wait in complete silence until the 10th point is scored, and then the packed gym of more than 2,500 students bursts out into a deafening roar like what you would hear after a team wins the national championship. And then, near the end of the game, the students begin singing “Silent Night” in unison. Afterwards, students go to a campus-wide event called Habecker’s Hollapalooza, which has live Christmas music and is a place for students to make and eat Christmas cookies and make gingerbread houses.

I love the last part.

Taylor’s video, which runs for 2 minutes and 35 seconds and aptly shows all of this (except for Habecker’s Hollapalooza), went viral and gained nearly 1.6 million hits in less than 20 days.

It reminds me of college, because I went to a Christian school and we had to create our own fun. We didn’t party or get drunk, much like today’s secular college culture does to experience what they would consider fun. We had to be clever and/or creative to make our own fun.

I’m thinking Taylor should invite Grinnell for the next “Silent Night” event. Now that would be fun.

3. High school football coach Kevin Kelly: The name won’t sound familiar, but Kevin Kelly has been featured in Sports Illustrated several times and is revered by both the coaching and sports analytics community for his innovative style and unique way of playing football.

Kelly, the coach at Pulaski Academy in Little Rock, Ark., always, always goes for it on fourth down, so his team never punts. Yes, never. The Bruins also always have onside kicks. Always. They even have 12 different onside kick plays, which show their seriousness and commitment. And when it comes time to receive a punt, they never return it for fear of fumbling or getting an unnecessary penalty.

In addition, Pulaski almost always passes the ball and also runs numerous trick plays throughout the game. Not just one here or one there, but the trickery is commonplace each quarter.

At first glance, it appears to be all a gimmick, a fun way of running an offense or keeping the kids engaged or the fans wondering or opposing coaches guessing.

But this madness is actually rooted in statistics, which have proven true over the last 10-plus years when Kelly has compiled a 114-22 record and won three state titles, including the last in 2011. This past season, Pulaski finished 10-3 and was one victory away from playing in the state championship game.

It’s like Madden NFL the video game – except it’s real.

But this time, scoring 104 points was born out of necessity. Yes, necessity.

Yes, the opposing team scored 80 points. And, no, this wasn’t 8-man football. It was 11-man, traditional football.

The only thing not traditional was the score.

And, oh, by the way, it was a semifinal playoff game to decide which team would play for the state title.

“I don’t know what to say,” Davidson Day coach Chad Grier told The Charlotte Observer. “It was crazy. I don’t think I’ll ever live to see something like that happen again. It was just nuts.”

More nuts than the score were the stats: Junior quarterback Will Grier, who just committed to Florida and is the coach’s son, threw for 837 yards and 10 touchdowns (the yards broke a 12-year-old national record and the TDs tied a national record).

On top of that, Davidson Day scored on every possession except one, and Harrells Christian only punted once and had two turnovers.

If Pulaski Academy and Davidson Day could get together next year, that would be something worth putting on TV.

So, yes, despite the craziness and negativity, sports have remained that last safe-haven for us to enjoy sports for what they were meant to be—a game.

Were there any negative stories or comments about any of those four stories? Of course, there will always be cynical and crazed people looking to turn a positive into a negative or who always see the glass of water as half empty instead of half full (or even completely empty).

But, in these four instances, the positive truly outweighed the negative, and it helped me see that sports can truly be fun—even in today’s world. It also reminded me of something Paul said in Philippians 4:8-9, “Finally, brothers and sisters, whatever is true, whatever is noble, whatever is right, whatever is pure, whatever is lovely, whatever is admirable—if anything is excellent or praiseworthy—think about such things. Whatever you have learned or received or heard from me, or seen in me—put it into practice. And the God of peace will be with you.”

Why does it remind me of Paul’s writing?

Because he wrote this and all of Philippians (the “Book of Joy” some call it), while in prison.

He saw the positive despite the negative.

And we can, too. Especially when we have fun reminders like these.

This column was published in the December 2012 Sports Spectrum DigiMag. Print and digital subscribers, log in and view the issue here. Brett Honeycutt is the managing editor of Sports Spectrum magazine. His column addresses topics from a biblical perspective. Follow him on Twitter-@Brett_Honeycutt.